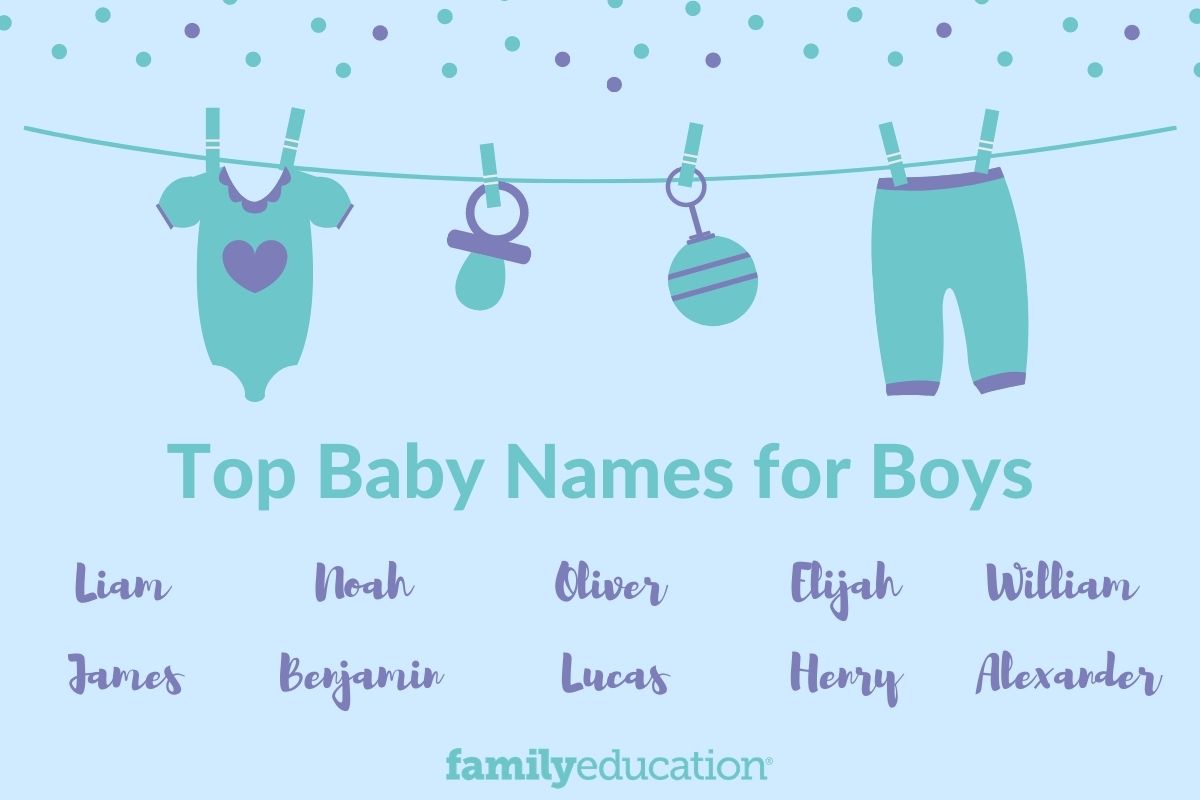 What are the five most popular names for boys?

The latest data is in from the Social Security Administration for 2021 and these were the five most popular names for boys this past year. Continue reading for the top 1000 boy names along with their meaning, origin, and popularity over the years.

Choosing a baby name can be stressful. Should you name your new baby Jayden? Asher? Or will he be more of an Axel? There are endless options out there, and everyone has their opinion. Whether you’ve chosen a name already or are just starting to scour the internet for the perfect name, browsing popular baby name lists can be a helpful step in the process. These lists can not only inspire you, but help you determine whether you like trendy or classic names.

Every year the Social Security Administration releases its most popular baby names list. Each year they collect their data based on applications for Social Security cards. The 2020 data is based on the lowest number of births in over three decades, with the U.S. seeing a sharp decline in the birth rate. All data is reported from the First Name field on the social security card application. The given name must be at least two characters long in order to be included. Names with fewer than five occurrences in any geographic area are not included.

Editor's Note: The below list represents the most recent data from the Social Security Administration. It reflects the data from 2020 based on the births of 2019. The 2019 data was originally delayed due to COVID.

This coming year will bring a generation of babies named after superheroes and powerful mythological creatures as today's parents find themselves facing a challenging economy and the COVID-19 pandemic. These unique baby boy names are a reflection of the current events. In these overwhelming and stressful times, many parents feel inclined to equip their children with a "fighting name" while others would rather preserve memories of better times by choosing nostalgic names from the cottagecore aesthetic.

We will see lots of names beginning with "Ever" as well as those ending in the "en" prefix, including Aiden, Jackson, Logan, and Caden. Names of both Japanese and Hebrew origin are on the rise. As the current generation becomes more mindful of gender pluralism, we will also see a growing number of gender-neutral names trending.

According to our own data, these have been the most popular boy name lists in 2021 so far:

Boy Names on the Rise

Liam has remained the number one baby boy name since 2017 when it bumped out Noah. We are likely to see lots of Liams and Noahs going forward, but slightly fewer Matthews and Benjamins.

According to the most recent Social Security Administration data from 2021 that looks at the trends of 2020:

Boy Names on the Decline

The name Donald will faced a sharp decline after President Donald Trump left office in the wake of violent protests and mobbing of the capitol. Names like Cole and Cove are also dropping in popularity due to any potential association with COVID.

According to the most recent Social Security Administration data from 2021 that looks at the trends of 2020, these were some of the names that became unpopular and saw the biggest declines:

Looking for girl names? Check out the This Year's Top Baby Girl Names.

The 1000 Most Popular Baby Names for Boys