FamilyEducation Staff
Looking for the most popular baby girl names? We've got the top 1000 baby names for girls in 2022. Learn what names are trending and the most common girls' names. 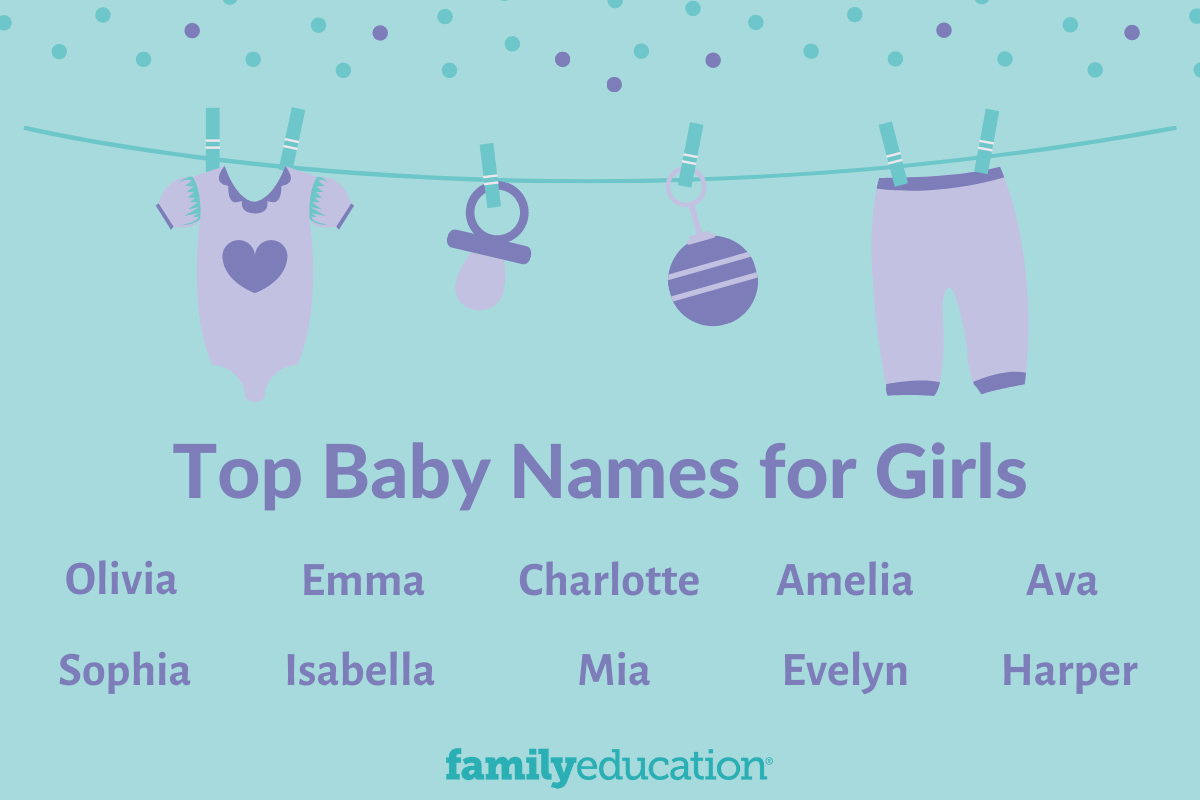 Are you wondering what the top baby girl names were this year?

Names for girls go through different phases of popularity every decade, but some beautiful girl names stay strong every year. The top girl names of the year saw many familiar favorites and some surprises!

Think you know which name topped the list? The latest data is in from the Social Security Administration and these were the 10 most popular girl names this past year. Continue reading for the top 1000 girl names along with their meaning, origin, and popularity over the years.

Looking for the most popular baby girl names? We've got the top 1000 baby names for girls in 2022. Learn what names are trending and the most common girls' names, so you can pick the perfect name when your little one arrives.

What Are The Most Popular Baby Girl Names?

The latest data is in from the Social Security Administration and these were the ten most popular names for girls this past year. Continue reading for the top 1000 girl names along with their meaning, origin, and popularity over the years.

Charlotte is a French name for girls meaning “little and womanly”

Amelia is a German name for girls meaning “industrious”

Ava is a Latin name for girls meaning “blooming” or “birdlike”

Mia is a popular girl’s name with Italian, Hebrew and Scandinavian roots. Mia can mean “mine,” “bitter,” or “star of the sea”

Harper is an Old Norse name for girls meaning “whaler”

Olivia claimed the top spot for the third time in a row!  Charlotte also rose a spot in the ranking, and Ava overcame Sophia to claim a spot in the top five.

Looking for boy names? Check out the This Year's Top Baby Boy Names.

How do we determine the most popular name given to girls this year? Every year the Social Security Administration releases its most popular baby names list. Each year they collect their data based on applications for Social Security cards. The 2020 data is based on the lowest number of births in over three decades, with the U.S. seeing a sharp decline in the birth rate.

All baby name data is reported from the “First Name” field on the Social Security card application. The given name must be at least two characters long in order to be included. Names with fewer than five occurrences in any geographic area are not included.

Editor's Note: The below list represents the most recent data from the Social Security Administration. It reflects the most popular boy name data from 2021 based on the births of 2020.

This year we saw a number of girls with nature-inspired names as well as more parents choosing goddess names and other mythological female figures in their name choices. Flower names for girls like Daisy and  Marigold were trending in 2022. Previously uncommon girl names like Luna, the Roman goddess of the moon, and Maeve, the Irish fertility goddess, also became more popular monikers in 2022.

Girl names also had more of a tomboy twist in 2022 with old-fashioned and traditionally masculine names like “Billie” and “Max” becoming more common choices as a name for girls this year than in previous decades. This shift to choosing more unisex names makes sense when considering the rise of gender-neutral names for boys and girls across the board.

To see a complete list of our predictions for last year's top girl names, check out Our Top Predictions for the Top Baby Names of 2022.

According to our own data, these have been the most popular girl name lists on our website in 2022:

According to the most recent Social Security Administration data, these were some of the most notable names:

In 2022, Ava and other names with long “a” sounds, like Ayda, Ayla, and Faye are starting to pop up more often. "Ever" names like Evelyn and Everly are on the rise, as are "Elle" names, like Eleanor, Ella, and Eliana.

Longer names seem to be gaining traction as many of the fastest-rising names are longer than four letters.

According to the most recent Social Security Administration data:

Denisse's fast drop in popularity is particularly notable, as it was listed as the fastest-growing name in the 2020 most popular girl names list.

Karen, which was not terribly popular, to begin with, also dropped significantly, presumably because it became a popular meme and derogatory term for an entitled and out-of-touch woman

Over the past year, the name Cora declined sharply, as did names beginning with the Cove- prefix. This is likely because of the association with COVID-19. In addition, we are seeing declining popularity for the following names: Coral, Coralie, Coraline, Cordelia, Corrine, and Cove.

Choosing the perfect baby name for your little girl can seem like one of the most daunting tasks during pregnancy. Every name reminds you of someone or has some positive or negative association that you may or may not want to incorporate into your baby's identity. That's why browsing top baby girl name lists like this one can help inspire you and even introduce you to trending names that you may have not considered before.

You've done everything from stocking her closet to building the crib for your new little girl, but you haven't chosen a name yet. Is she going to be more of a Luna or a Victoria? What about Amelia?