FamilyEducation Staff
Find your French last name and learn about its meaning and origins.
Table of contents

France is one of the oldest countries in the world with a history rich with revolutions, writers, philosophers, and musicians. France's capital city Paris is one of the most well-known cultural centers in the world due to its influence on food, art, and couture fashion.

Ancient France was part of the Celtic territory in Western Europe known as Gaul or Gallia that was conquered in the Roman conquests. In the 5th century, a Germanic group known as the Franks conquered the area. The name "France" comes from the Latin word Francia, which literally means "land of the Franks" or "Frankland".

In the following centuries, France was ruled by a series of monarchs until the French Revolution overthrew the monarchy during the 18th century. Following the French Revolution, Napoleon Bonaparte became Emporer of France, conquering much of Europe. When Napoleon was eventually defeated at the Battle of Waterloo, France underwent many different regime changes. France played an important role in both World War I and World War II. In 1945, the Allies declared victory in the Second World War on the French coast during the Battle of Normandy.

Today France is one of the world's most powerful global forces with one of the most diverse populations in the world. The French language is spoken across continents, and French people are known for their strong sense of individualism. This individual nature and sense of self translates to a very important history of French names. 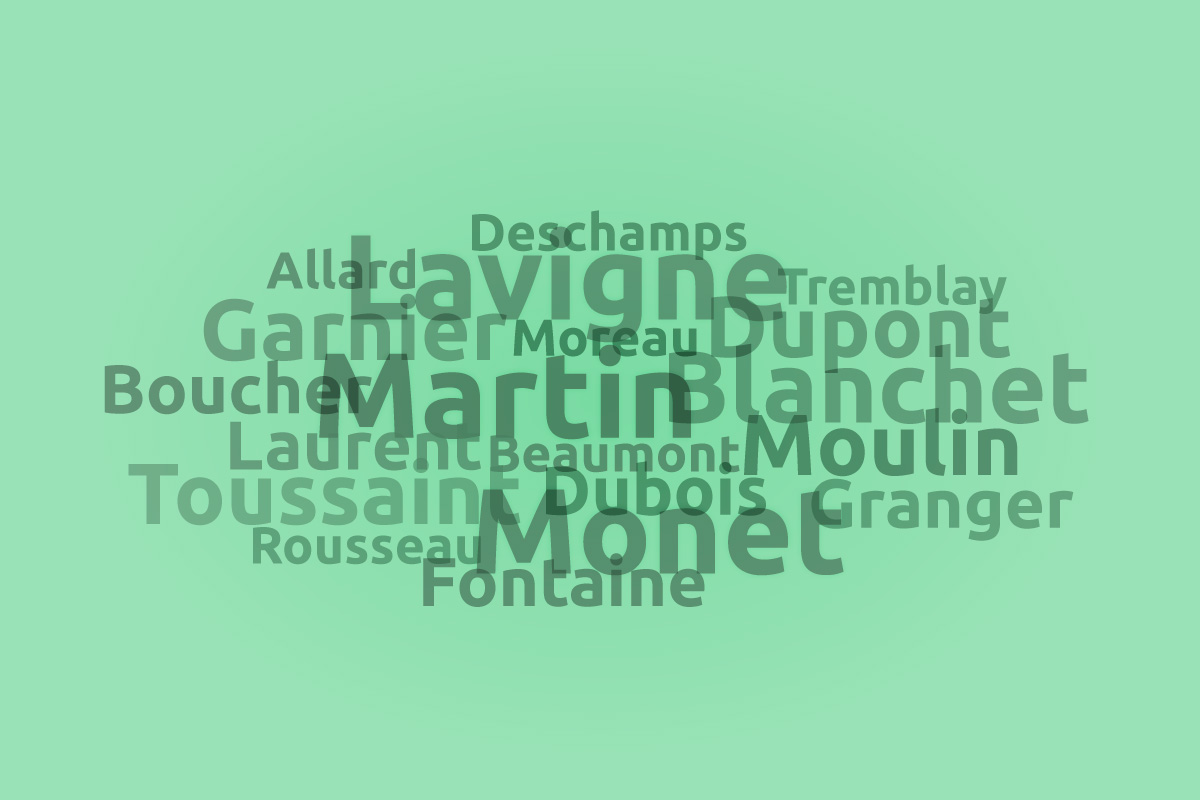 The Origin of French Last Names

The term "surname" actually has Old French origins. The etymology of surname comes from Middle English and the Anglo-Saxon/ Old French word "surnum" and "surnoun," which translates to "above-or-over name."

The first use of surnames was recorded in France around 1000 A.D.’s, though giving last names did not become common practice until many centuries later. The use of last names in France, like in much of Europe, didn't become necessary until the 11th century, to differentiate between people with the same first name. It was pretty easy to adopt any last name you wished until 1474 when the king decreed that all last name changes had to go through him. From then on, all name changes were recorded, making it easier to trace family history.

Many  French last names have a Germanic origin due to the frequent land changes between the French and Germanic people through the centuries. So if your last name sounds German, it doesn't mean you actually are! In South-Eastern France, many surnames also have elements of the Italian language due to population migration across Europe. Today "French" and "François" are also popular French last names in their own rights.

French Naming Practices and The Most Common French Surnames

The 10 Most Popular French Last Names with Meanings

5 of the Most Unique French Surnames (with English Translations)