75 Colonial Names for Your Baby

L. Elizabeth Forry
If you are seeking a colonial name for your baby, we’ve compiled a list of 75 baby names that have their history and roots in the earliest days of America from the Mayflower and the first Thanksgiving up and through the Revolutionary War that brought America her Independence.
Table of contents

Early settlers fashioned one of the first American settlements, Virginia, to honor the Virgin Queen, Elizabeth I. It was customary in the early days of America to name places after the reigning monarchs or their wives and children: Jamestown, Marysville, Elizabethtown, Annapolis (City of Anne).

In the 1600s, the majority of new Americans were those seeking religious freedom from England. As a result, four of the most popular female names were English in origin: Elizabeth, Mary, Anne, and Sarah. Even 100 years after signing the Declaration of Independence, when the Social Security Administration began keeping tabs, Mary, Anna, and Elizabeth were still topping the charts. For boys, names such as John, William, Henry, and George were popular 400 years ago and are still quite popular today.

The Spanish also explored the New World but didn’t set foot in what is now the United States until 1513, when they established a settlement in Florida. However, the English, not to be outdone, won a battle for American territories between Spain and England leaving the once-powerful Spanish Armada in shambles in 1588, and eroding Spain's exploration efforts in the Americas.

Despite England now having a clear way, many early English settlements met with disaster. At times, entire communities, like the one established in 1585 on Roanoke Island, were destroyed by disease, starvation, and attacks by Native Americans attempting to impede the new settlers from invading their lands. As a result, it wasn't until the Mayflower set sail in 1620 that significant settlements were established in the New World. The Mayflower brought 102 men, women, and children and many of the names that would stand the test of time on the newly minted American soil.

If you are seeking a colonial name for your baby, we’ve compiled a list of 75 baby names that have their history and roots in the earliest days of America from the Mayflower and the first Thanksgiving up and through the Revolutionary War that brought America her Independence. 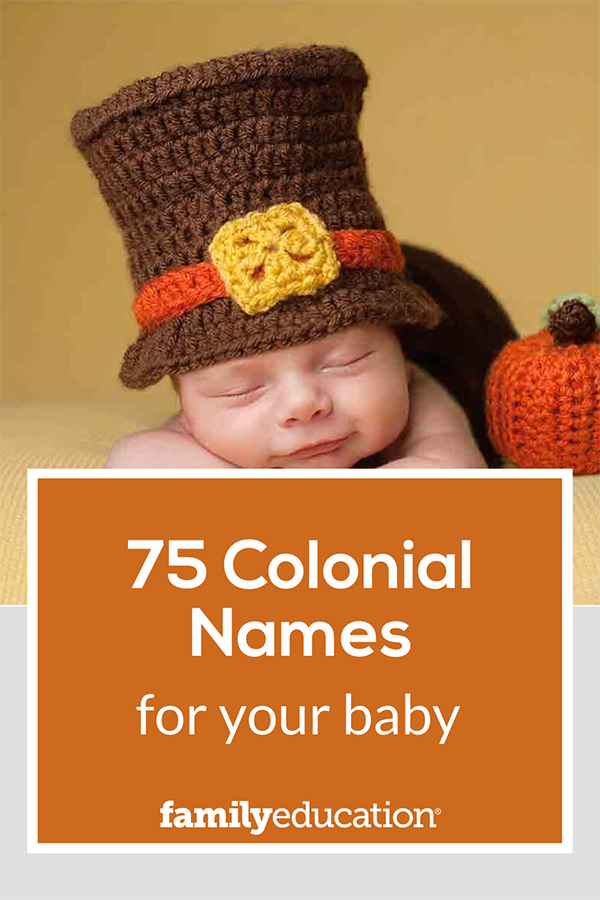