L. Elizabeth Forry
Find your American last name and learn about its meaning and origins. Explore our list of the most popular American surnames. 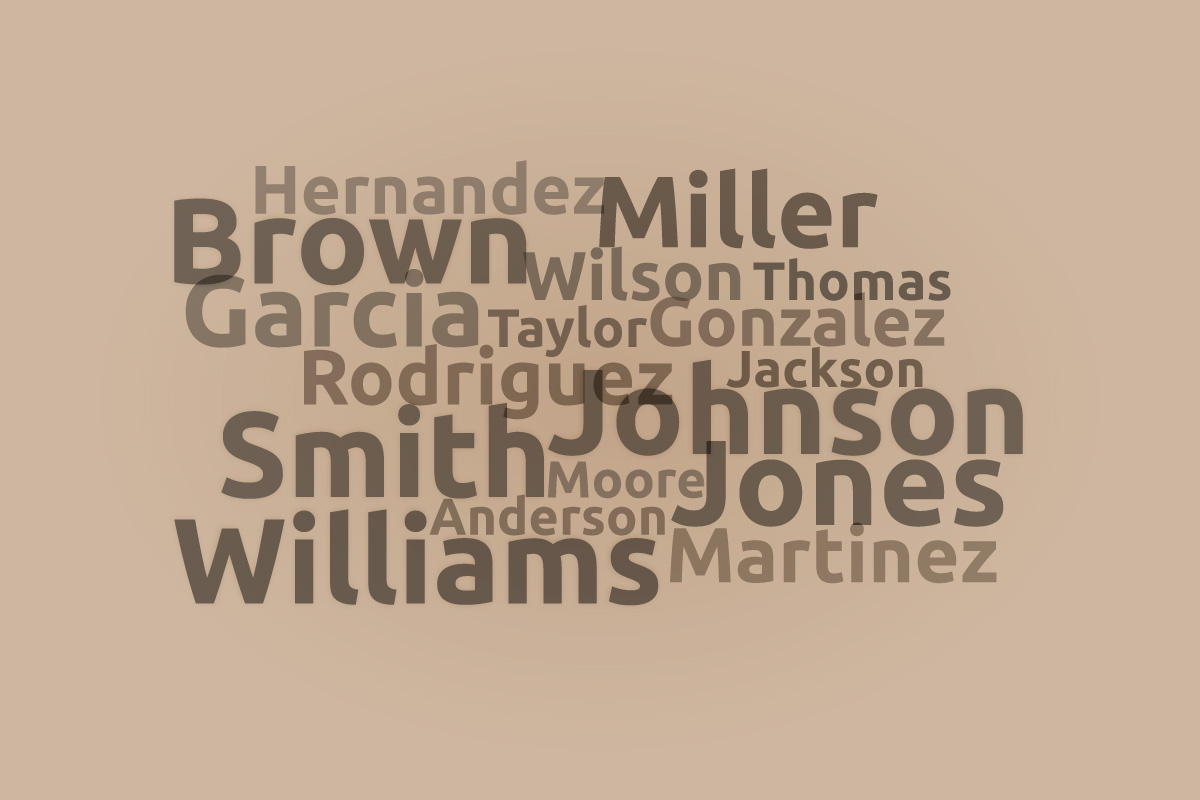 America is known as the world's melting pot, so compiling a list of American last names was no small feat. First, we had to ask ourselves, what exactly is an American last name? What are the criteria needed to be considered American?

The first Americans were the indigenous people who lived on the American continents thousands of years before the European, Leif Erikson, ever stepped foot on the land. Then the land was conquered and settled by the Spanish, Portuguese, Dutch, English, German, and French (to name a few!) Finally, European settlers brought generations of enslaved people, primarily of African descent, to the Americas over a four-hundred-year period.

Long after the United States became a nation, over twelve million people immigrated to America during the operation of Ellis Island, 1892 to 1952; However, those numbers steadily declined between 1921-1954 when the government passed strict anti-immigration legislation.

Many new citizens traveled from Eastern Europe, Central Europe, and Ireland. But some also came from South America, Africa, and Asia.

In an effort to present a well-rounded picture of American last names, the article will break down common American surnames by country or culture of origin along with their meaning.

According to the 2010 Census, below are the top ten surnames in the United States.

Native Americans did not always have last names in the same fashion we use them today. As English-speaking culture overtook North America, some indigenous people adopted tribe names, place names, habitational names, and occupational names. Others were assigned surnames by the federal government. It can be challenging to trace down the origins of some Indigenous names and their origins because tribes and nations shifted and combined as Europeans pushed west.

There is no doubt that Anglo-Saxon cultures like England, Scotland, and Ireland heavily influenced American last names. This is because many of the United States' early settlers were English individuals seeking new opportunities in a new land. Then later, during the mass immigration period during Ellis Island, thousands of Irish ventured to America for their chance at a new opportunity. As a result, many common last names came from these early settlers and are based on Gaelic or English words and names.

While we often think of the English when thinking of America’s early history, the German and Dutch were also very early settlers. You may have even heard the rumor that German almost became the official language of the U.S. While the German language story isn’t quite accurate, as it was never voted on as the legend says, there were indeed many German-speaking individuals in the U.S. at the time of the Revolutionary War.

While the German settlers were most prominent in Pennsylvania, Dutch settlers stayed mainly in New York and what would become known as New England.

African American names are often a result of an individual's enslaved ancestors. It was common for enslaved individuals to take on the same surname as their owner. Unfortunately, these names do not connect these individuals with their original roots and familial ancestry. Post emancipation, many freed individuals kept their surname in hopes of connecting with other relatives who had been traded or sold over the years.

Before the English began settling parts of the Americas, the Spanish had already invaded and overtaken parts of South America, Florida, and the West Indies. Portugal explorers were not far behind and began settling in what is now Brazil in the 16th c. While nations warred and lines and territories changed, the Spanish and Portuguese influences continued and remained. Many Hispanic names include the suffice “ez,” which means “son of.”

In addition to the European nations already mentioned, many other individuals from the vast continent emigrated from their lands to America. Therefore no list of common surnames in America would be complete without a handful of names from across Europe.