Sa'iyda Shabazz
While you have over 100 options to chose from, these are 15 Harry Potter inspired baby names just for you (all chosen from the list of "good" characters).
Table of contents

Even 20 years after its initial release, the Harry Potter book series is still popular. The people who read the books as children quite literally grew up with the characters. And there is an entire generation of kids who don’t know a world where Hogwarts doesn’t exist. For die-hard Potter fans, there is no limit to how they will incorporate J.K. Rowling’s characters into their lives.

Harry Potter is a world full of characters. That’s why it’s a popular place for fans to mine for baby names. For even the most casual fan, you can find something that will fit whatever you’re looking for. Harry Potter baby names range from the eccentric (Nymphadora) to the mundane (Dudley) and everywhere in between. Picking a name like Molly is less obvious than picking a name like Albus Severus.

While you have over 100 options, these are 15 Harry Potter inspired baby names for you. As a note, these are the names of “good” characters. If you want to name your baby Draco or Bellatrix, you can, but they could have a dark mark.

One third of the core trio of the story, Hermione Granger is the glue that holds everything together.

You may not remember that Professor McGonagall’s first name is Minerva. This name sounds very old fashioned, but also very cool.

Pomona Sprout is the Herbology professor at Hogwarts. The name is a little offbeat, but is perfect if you’re looking for something different!

Emmeline Vance is a lesser known character who is also a member of the Order of the Phoenix. Not only is the character lesser known, but Emmeline isn’t a super common name either.

Harry’s dad, James Potter is popular and mostly well liked in flashbacks. James is becoming a more common gender-neutral name; Blake Lively and Ryan Reynolds have a daughter with the name.

Florean Fortescue is the Diagon Alley ice cream vendor. The name has a very magical flair to it, and will sound good for anyone.

Kingsley Shacklebolt is a prominent older member of the Order of the Phoenix. Kingsley is a majestic name fit for anyone.

Orion Black, father to Sirius, wasn’t exactly the best wizard. But sharing his name with a constellation makes it forgivable.

Naming your kid after one of the many Weasley’s automatically makes them cool. And Charlie is a name definitely growing in popularity for all.

Neville Longbottom has one of the best character arcs of the story. Though he’s seen as a dork initially, he really steps up, in spite of his troubled background

Seamus Finnegan is one of Harry’s fellow Gryffindors. The name Seamus has Gaelic origins, which means it’ll be less common.

Phineas Black is great-great grandfather to Sirius Black. He is also a former headmaster at Hogwarts.

Errol is the Weasley family owl. But the popularity of the name goes back to classic Hollywood actor Errol Flynn.

Considering one of these names? Save it on Pinterest: 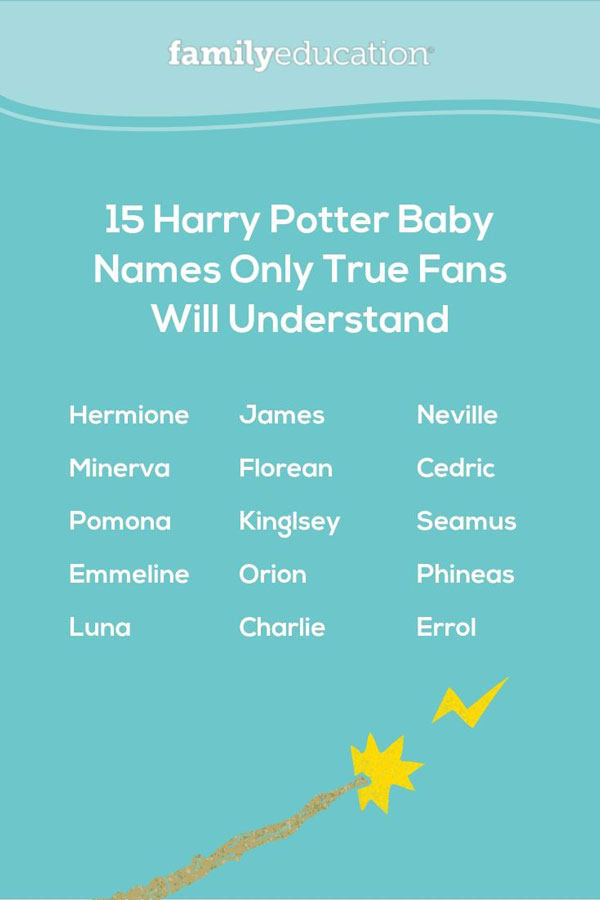 Are you an avid Disney fan? Here are 15 Unique Disney Baby Names sure to inspire your name search.