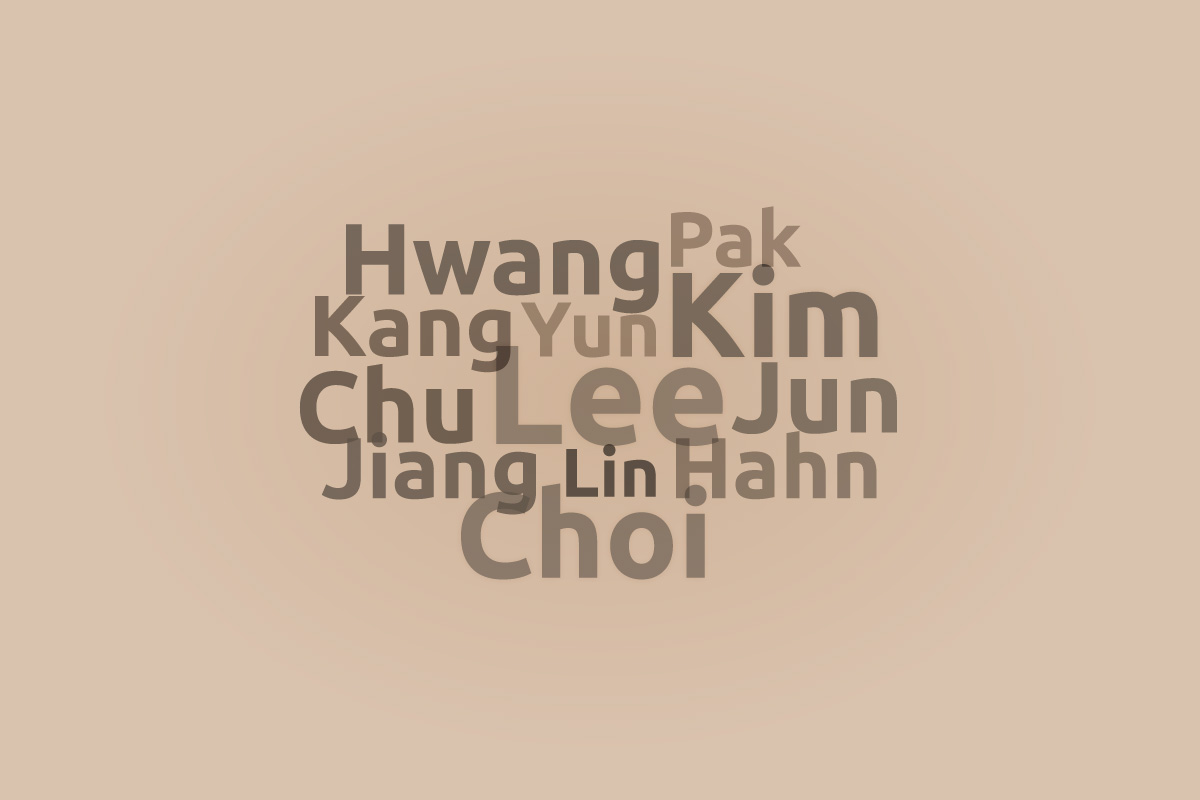 The most common last name in South Korea is Kim. In fact, in a population of a little more than 50 million, one in five are named Kim. One in 10 Koreans are named Lee, and nearly half the population is named Kim, Lee, or Choi. Given that so many Korean people have one of three last names, you may wonder how many other last names the country has; the answer is quite a few!

Traditional Korean surnames involve using a single syllable to differentiate what generation the person is within the family. The single syllable, also referred to as their Korean family name, precedes the individual's first name. So, for example, all the cousins of one generation may use the syllable Bak in front of their first name so you could have Bak Aera, Bak Jiah, and Bak Minji.

Naming culture in North Korea and South Korea has followed similar traditions for generations. Still, South Korean culture is slowly changing based on western influences, and younger generations are beginning to place their surname at the end.

Another unique tradition is that Korean women typically don’t take their husband’s surname; however, their children will have the same surname as their father.

Korean last names have been influenced by both Chinese and Japanese culture and their own rich history. China has had such an influence on Koran culture that many Korean names use Chinese characters.

Surnames were typically reserved for people of means; therefore, many commoners did not have one. When Japan occupied Korea in 1910, many adopted the surname of their master.

The Tang Dynasty of China ran from 618-907 CE and is considered the epitome of ancient Chinese culture and civilization. During the Tang dynasty, Japan and Korea began adopting Chinese ideas of legal, political, and writing systems.

Korea lies very close to China, and as a result, the two nations have engaged in wars, cultural exchanges, and influences. As such, many Korean names are heavily influenced by the Chinese language.

Korean Surnames Based on Colors

Many Korean surnames have their basis in colors. Color in Korea is very significant, primarily what is referred to as Korean primary colors: white, blue, black, red, and yellow, which represent the elements. Natural colors like white, yellow, and natural unbleached colors also have great significance.

Korea has a rich and vibrant past involving warriors and nobility. Like Japan, the Koreans had a warrior class centered around various martial arts styles.

Like many other cultures, Koreans tended to take names that represented the region they were from or geographical attributes surrounding their homes.

Last Names Based on Personal Attributes

Some Koreans may have gained their surname based on a family attribute or an ancestor’s physical characteristic. These often started as nicknames or were part of a family’s code of honor.