Charise Rohm Nulsen
Here are 25 of the latest Gen Z slang words and phrases that are showing up in 2020, and what they mean.

Nothing makes parents feel older than listening to younger generations use slang and having no idea what they are talking about. Fortunately, we have a guide to the top 25 Gen Z slang phrases that all parents should know.

If you’re not sure what demographic the term Gen Z even refers to, you can consider all of the youth in your life who were born after 1996. To save you from doing the math, that means that the oldest among the Gen Z demographic will be turning 23 years old this year.

The COVID-19 pandemic has turned the world upside down for Gen Z-ers, and their future must feel very uncertain. They spend a lot of time worrying about what’s to come, so let’s spend a few minutes getting to know their world by learning the top 25 Gen Z slang phrases (which will probably evolve before we even finish learning these terms!).

Don’t have time to finish reading now? Pin it for later: 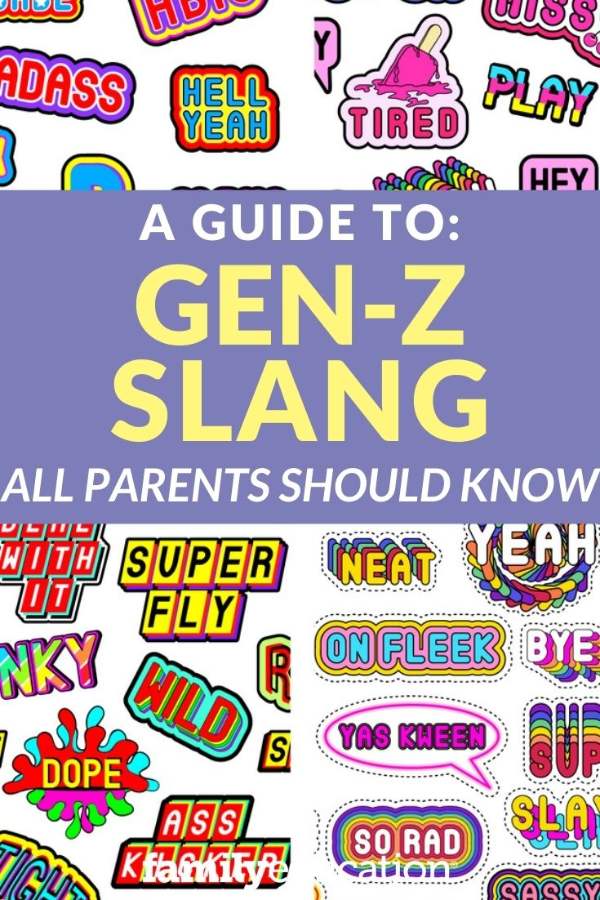 Cancel culture is a form of online shaming to express disappointment in the views or actions of a public figure, company, or organization. It is a way that Gen Z is using their voices on social media, often for the good. Like with many things these days, irreparable damage can be done to someone’s reputation based on false information or rumor.

Playing on the definition of CEO in real life, when someone is the “CEO of” something, it means they are the very best at it or have mastered it.

E-boys and E-girls use the internet to express themselves and are similar to being semi-emo or goth.

Fam is used the way our generation may have used “bro.” This term is used for your closest of friends.

Glow up describes a makeover or transformation from bad to good in some way. If you think a new haircut makes you more attractive, you might refer to this as a “glow up.”

Feeling helpless or not capable in a certain area of your life? You might want to try the Gen Z term “I’m baby.”

Stan combines the words “stalker” and “fan.” A stan is an obsessive fan of something but not on a creepy level.

Gen Z can be so mysterious that sometimes, they only use a single letter to express something. “Win” can be too many letters to type, so you can just use “W.” For example, “I didn’t oversleep today, so that is a W.”

Woke refers to political awareness. People who are woke are not politically incorrect. They care about having an open mind and things like the earth, Black Lives Matter, and feminism.

TFW is an abbreviation for “that feeling when” as in “TFW you have a hot cup of coffee in a quiet house.”

Sip tea is a phrase that is used when you are just sitting back and listening to the gossip as opposed to participating in it.

A snack is a term you might use to describe a person that you find attractive.

“Wig” is something you can say to express admiration for something when it is so exciting to you that your wig might be blown off.

Big yikes takes regular yikes to a new level. You use it when you’re so embarrassed that “yikes” doesn’t do it justice.

If you feel salty, it means that you are jealous.

Lewk is the term for something that is your very own personal signature style. If you wear a certain kind of something every day, that would be your “lewk.”

Boujee is a term that you could use to describe someone who is fancy and likes extravagant things.

Dank is slang for something that is excellent and very high quality.

Finna is short for saying “I am going to.” You could say, “I am finna order some pizza.”

If you ghost someone, it means you suddenly start ignoring something. This usually happens in the phase of early dating over text.

A hypebeast is someone who cares too much about things that are popular rather than being more of an individual.

L is the opposite of the vague slang “W.” You use it to reference a loss as opposed to the win of “W.”

If someone is being extremely annoying, you might tell them to “take several seats.”

Whip is another word for car. This is actually a reference to the history of cars when steering wheels were first introduced and called whips.

When someone has “steez,” it means they have effortless style. A true compliment.