Finding Out You're Pregnant

This article describes the tests that determine if you really are pregnant, as well as the emotions you may feel when you first find out that you are expecting.
Table of contents

The best of times...the worst of times... Finding out you're pregnant can be exhilarating, frightening, and downright baffling. You'll run the gamut of emotions from sheer joy to outright terror. It's not just the pregnancy you have to get through – it's all those emotions about becoming a parent.

The Tests and Symptoms

First things first: Are you or aren't you pregnant? Most women find out they're pregnant by the tried and true method – that is, their period stops. So, if you miss a period, and you've been sexually active, it's safe to assume that you could be pregnant, and you should take a pregnancy test. You can either purchase a pregnancy kit at your local drugstore or go to a clinic (or your doctor) to have a test performed. (Check out this list of resources if you are looking to get a free pregnancy test.)

Pregnancy kits come in all shapes and sizes. What they all have in common is that they are fairly easy to use. Basically, you urinate into a container and follow the instructions about what to do next. Usually, the test results occur in a matter of minutes. Sometimes, it's good to take a back-up test, particularly if you suspect the test is positive, but it turns up negative (called a false negative; there is also a false positive). A kit is not infallible; it can be wrong.

Personally, I panicked every time I took a pregnancy test – mostly because I freaked out that I would do something wrong.

Sometimes, I coerced my husband into helping, but usually the directions were simple and easy to follow. There are even pictures if you really get confused. Sometimes, there are two tests in a kit, so if anything goes wrong, you have a backup.

Pay attention because this can get confusing. A false negative means that the pregnancy test indicated the test was negative (you aren't pregnant), but, in fact, it isn't really negative, it's really positive (you are pregnant). A false positive is the reverse (totally confusing, I know).

Any test that you can do on yourself has a false positive and a false negative rate. The manufacturers try to design a test to pick up the entire spectrum of possibilities from everyone who is normal to those who are abnormal. Unfortunately, making any test sensitive to everyone is impossible. For example, if you lower the test to pick up an abnormality, you may pick up a lot of false positives. When you design a test to rule out a problem (for example, you want it to come back negative in most instances), you will have a few false positives. Scientists try to minimize these instances, but they can't ever eliminate them, so they use a bell-shaped curve. 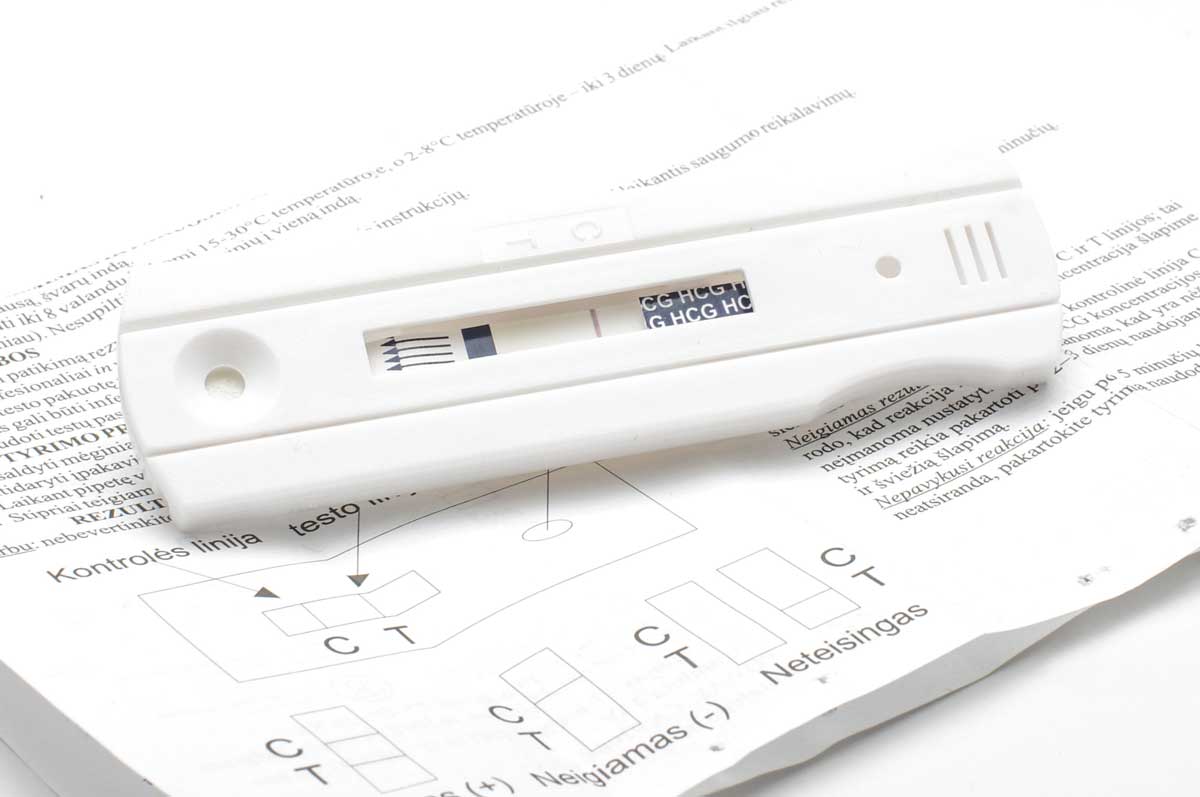 The upshot of this information for you is that if you know you're pregnant because your body is telling you something that the test doesn't, then repeat the test. Eventually, it should turn out positive; or preferably, have your doctor do the test. It's rare that the doctor will have a problem with the test, but it is possible.

Case History – Nothing Is Ever 100% Sure

My friend Jane had been trying to get pregnant for years. Finally, she thought she was pregnant, but when the doctor gave her a pregnancy test (blood test) at his office that morning, it came back negative. As Jane continues the story, "I went home and within two hours of the doctor's test, I had a very strange bit of spotting or bleeding, but it didn't feel like a normal period. I'd heard that early in a pregnancy you could have some spotting that wasn't normal, so I took a home pregnancy test within a few hours of the doctor's test, and it came out positive. Obviously, I didn't believe the first test, so I took a second home pregnancy test a couple of hours later, and it was also positive. I called the doctor back because I was scheduled to have a D&C the next day. He said it was unlikely that I was pregnant because his test was probably more accurate than my home pregnancy test. Although the doctor still felt that I would need a D&C, he agreed to give me a repeat pregnancy test that afternoon anyway. The second test came out positive." Incidentally, Jane's son (the pregnancy that wasn't detected) is now 20 years old.

A test performed at a clinic is more reliable than a home pregnancy test. A lot of clinics do a urine test first simply because it's easier and cheaper, but sometimes they may elect to do a blood test for pregnancy. The blood test is usually done if there are questions about the validity of the urine pregnancy test or if the doctor needs to check a level of pregnancy hormone called a Quantitative Beta HCG (basically the exact level of pregnancy hormone in the bloodstream).

A urine test and a simple blood test are examples of a qualitative test. In other words, these tests just indicate yes or no – either you're pregnant or you're not. A quantitative test measures the exact amount of hormones in the blood, which could help a doctor determine if the pregnancy is normal or abnormal. Typically, a doctor will order this test when he is worried about an ectopic pregnancy or a miscarriage.

You may feel out-of-sorts emotionally and be a bit testier than usual with family and friends. (OK, you can be a hellcat on wheels, or cry without warning.) Things that normally wouldn't bother you may bother you enormously. You may feel depressed or have feelings of depression that are unexplained. Oddly enough, you may have an increased libido or sex drive and not know why. All of these symptoms can be attributed to pregnancy, so don't worry about them too much. They can also be attributed to an increase in hormones due to the pregnancy.

From the Mother's Perspective...

I always knew that I was pregnant because I couldn't eat or drink some of my favorite foods and beverages without getting terribly queasy and sick to my stomach. For example, diet drinks made me ill.

My friends would always quip that I must be pregnant if I turned down a TAB (I know this dates me!).

Sometimes, I also had a taste for different foods, particularly an increase in sugar (maybe not the best energy, but definitely quick). Hey, those pickle/ice cream stories in the middle of the night are true. Cravings are a real function of pregnancy. I also remember wanting to sleep the entire first two months of my first pregnancy – a natural gestation period. I don't know when I've ever been so tired.