How Twins Are Conceived

One in every 31 births in the U.S. is a twin birth, so how are twins conceived? Read about conception of identical and fraternal twins, triplets, quads, and higher multiples, and their genes.
Table of contents

Today in the US, one in every 31 births is a twin birth. Twins are conceived in two ways that result in either identical or nonidentical twins.

Identical twins occur when one fertilized egg splits into two separate cells. This type of twin is half as common as nonidentical twins. Identical twins have the same genes and are the same sex, so they are very alike, although subtle differences in their environment can mean they're not always identical in every way. Identical twins are known as "monozygotic" twins, since they come from one "zygote," or fertilized egg. Triplets, quads, and higher multiples can be monozygotic too. However, triplets and more can arise from more complex combinations. For example, there may have been two fertilized eggs, one of which split into two.

Nonidentical twins occur when two eggs are released at ovulation. Each twin's genes comes from the parents, but the twins don't share the same mix of genes. Nonidentical twins are also called "fraternal" twins, since they're no more alike than other siblings and can be of a different sex. They're also referred to as "dizygotic" twins, because they come from two separate "zygotes," or fertilized eggs. Nonidentical triplets arise when three eggs are released instead of one. This is more likely to occur when ovulation is induced with drugs during fertility treatment. 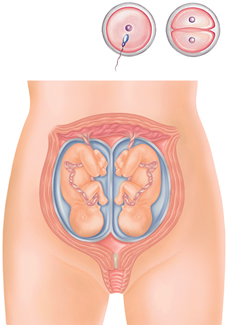 Identical twins that result from the division of one fertilized egg may share a placenta in the uterus. Occasionally, they also share an amniotic sac.