Medically reviewed by Dr. Neha Sheth, DO FACOG. Dr. Sheth is a board-certified Obstetrician and Gynecologist in New York City who delivers and performs surgeries at Lenox Hill Hospital. She practices at Upper East Side Ob/Gyn in Manhattan, New York.

Read about the importance of the placenta, and problems that can arise in multiple pregnancies.
Table of contents

The placenta plays a vital role in pregnancy, delivering nutrients and oxygen to the babies and removing their carbon dioxide & wastes. The placenta also secretes steroid hormones that regular maternal metabolism and fetal growth and development.
In a multiple pregnancy, each baby may have his own placenta, or two babies may share a single placenta. Either way, if something goes wrong, the babies' survival is at stake. For example, if two eggs are fertilized by two sperm, each baby will share their own placenta called dichorionic diamniotic twins. These are commonly known as “fraternal twins”.

Placental abruptions are three times more common in multiple pregnancies because of the increased stretching of the uterus which expands more to accommodate the extra babies. Additionally, multiple pregnancies are at higher risk for the development of conditions that can cause placenta abruption including pre-eclampsia, a more severe hypertension condition of pregnancy.

If postpartum bleeding is so heavy that you soak through a sanitary pad in less than an hour, seek medical attention. Signs of a uterine infection that can also cause postpartum bleeding include vaginal discharge with a foul odor or severe abdominal pain not controlled by over-the-counter ibuprofen or Tylenol.
Additional signs of hemorrhage include bright red bleeding that lingers around two to six weeks after delivery, vaginal discharge with a foul odor, or discharge that includes blood clots larger than an inch in diameter. 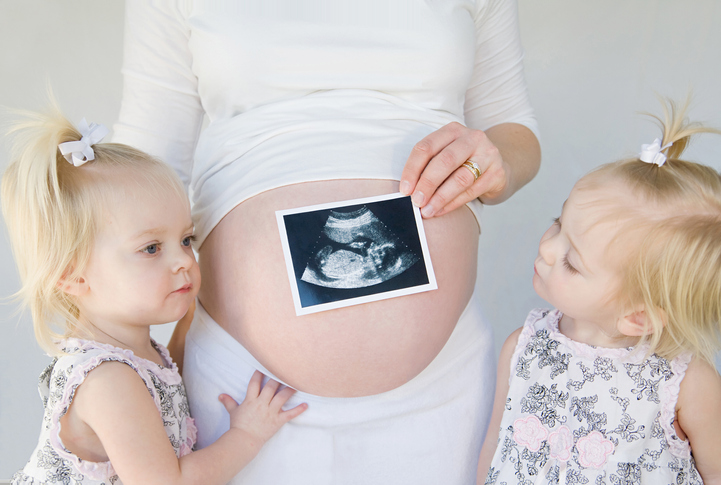 When the placenta implants low in the uterus, covering the cervical opening, it's called placenta previa. The chances of this happening are increased when a uterus has to accommodate two or more placentas. While placenta previa does not pose a risk to the babies' development, it does increase the risk for preterm delivery and heavy vaginal bleeding, especially in the 3rd trimester as the cervix begins to dilate or labor commences.

However, the majority of placenta previas resolve by 32 weeks. As the uterus grows, it can pull the placenta upward and away from the cervix. If the placenta previa does not resolve, modified pelvic rest including no intercourse, no strenuous activity, no prolonged standing, and no heavy lifting can help prevent heavy bleeding.

Bed rest may help the bleeding subside by decreasing the amount of pressure on the placenta. In extreme cases, the mother may require a blood transfusion to prevent excess blood loss. Usually, she will have to deliver the babies via cesarean section. 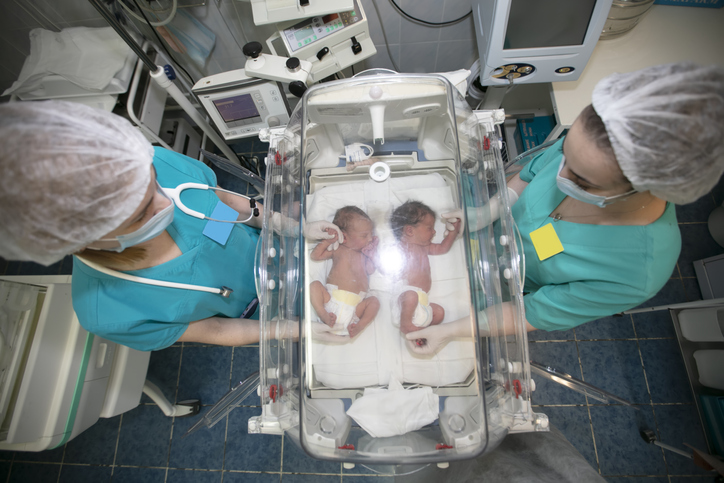 Sometimes the placenta begins to detach prematurely from the wall of the uterus, a condition called abruptio placentae. While it can be caused by trauma to the abdominal region, such as a motor vehicle accident, it can also be instigated by other conditions that are common in multiple pregnancies, such as pre-eclampsia, a severe high blood pressure condition.

The detachment may be mild and partial, happening slowly over time, or complete and sudden. Abdominal pain and vaginal bleeding usually accompany complete abruption. This is often accompanied by uterine contractions and nonreassuring fetal heart rate tracing. If the baby’s health is at risk or the mom experiences extremely heavy bleeding, this requires immediate delivery of the babies by C-section.

In these cases doctors will weigh the consequences of a pre-term delivery vs. the risks of placental abruption and make a decision based on what is best for both the mother’s and the babies’ health.

Mothers of multiples have a three to four times increased risk of hemorrhage, or uncontrolled bleeding, during their pregnancy or following delivery. Several factors contribute to the risk:

Always speak with your doctor or OB-GYN about any health concerns or problems that may arise during your pregnancy.