Everything You Need to Know About the Mucus Plug During Pregnancy

Rachel Sokol
Dr. Mitchell Kramer, Chairman Department of Obstetrics and Gynecology at Huntington Hospital, discusses what the mucus plug is, what losing it entails, and what it means in regards to labor.

Ok, no one said labor was glamorous—and if they did, I’d sure love to meet that person because I adore my kids, but NO, my labors were not glamorous. Speaking of ‘unglamorous’...when you hear the term “mucus plug” associated with labor, chances are you cringe at that medical term. What the heck is a mucus plug and when it “comes out” of you, vaginally, when pregnant, does that mean you’re in labor? I contacted an OB-GYN to learn everything about the mucus plug and more.

What is the mucus plug?

According to Dr. Mitchell Kramer, Chairman Department of Obstetrics and Gynecology at Long Island’s Huntington Hospital, “the mucus plug is a mucus seal that acts as a barrier between the vaginal environment which contains bacteria and the sterile environment inside the uterus where the pregnancy sac and fetus reside.”

This mucus protects the pregnancy/fetus from bacteria that do not belong inside and it really does act like a “plug” to keep harmful bacteria away from the uterus. 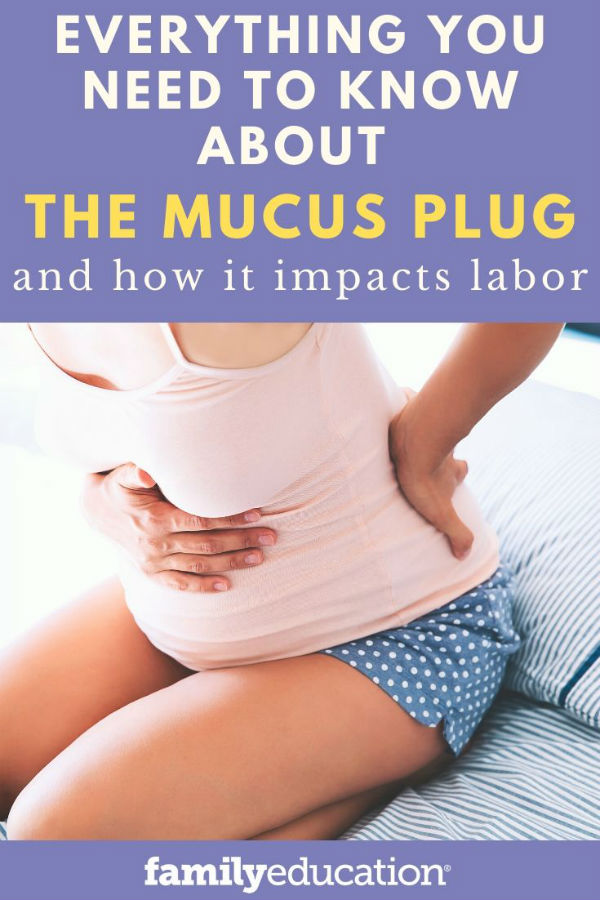 First of all, the mucous plug doesn’t always just fall out of your body and land in your undergarments. This can happen, but not to everyone.

According to Dr. Kramer, when a patient is at term, 37 weeks or beyond gestation, as the cervix changes (softens and thins), the mucus plug can be passed—it’s expelled due to these changes. “This can happen before labor or during labor. However, if a woman passes the mucus plug, it does not necessarily mean she’s in early labor.”

You may NOT actually be in labor

Of note: Labor can occur before losing the mucus plug or remotely afterwards. “It is not dangerous,” stresses Dr. Kramer. “The mucus plug is often a grayish, brown, jelly-like substance that comes out vaginally. It can sometimes have tinges of blood in it.”

The mucus plug may not fall out fully at once; it could fall out in bits and pieces over a period of time. Most women will lose their mucus plug before their water breaks. If your water breaks or you are leaking fluid, it’s important to seek medical attention right away.

He reiterates: just because you ‘lose’ your mucus plug, it does not necessarily indicate you are in labor or even going to go into labor soon—so don’t panic. If you have any additional questions about the mucus plug, be sure to speak with your OB-GYN.

Should you remove your own mucus plug?

According to What to Expect, “No, you should never pull out your mucous plug, as you don’t want to risk infection. Just try to let nature take its course (as challenging as that can be in the exciting time leading up to labor and delivery!).”

Is the mucus plug the same as the “bloody show”?

The mucus plug is often confused with the “bloody show”, but they are not the same thing. According to Medical News Today, the bloody show “is thick vaginal discharge that contains mucus and blood from the cervix. It usually occurs in late pregnancy, as the body prepares for labor.”

They explain, “Having bloody show and losing the mucus plug are closely related events, but they are not the same thing. The mucus plug is transparent and contains little or no blood, while bloody show is a mixture of blood and mucus.”

Have you heard of delayed cord clamping? Check out The Benefits of Delayed Cord Clamping After Birth.