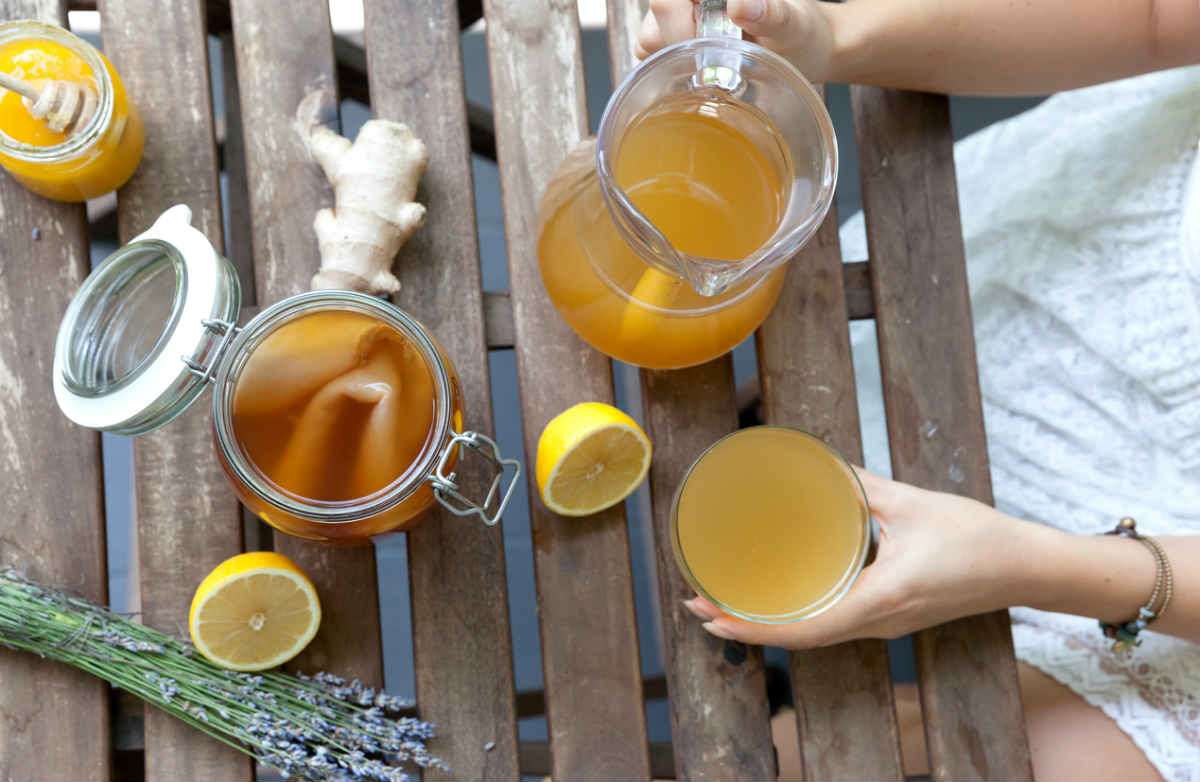 Can You Drink Kombucha While Pregnant?

There's a long list of things you cannot eat, drink, or do when you're pregnant. So, can you drink kombucha while pregnant? A Nutritionist and Infant Development Expert weigh in.
Miranda Altice

More: Is it Safe to Get Your Nails Done While Pregnant?

One thing that has been a semi-controversial addition to the no-no list is a healthy drink that’s akin to the grassroots days of pre-commercialized, homemade yogurt.

Can we all say, kombucha?

This curious but insanely popular tea is classified as a ‘functional beverage’, meaning it’s non-alcoholic (for the most part) and contains vitamins, amino acids, and other health-boosting properties. Sounds amazing… until you’re building a tiny human inside of you, then it turns questionable. So, can you drink kombucha while pregnant? Read on to find out.

Kombucha is obtained from a marriage of black, green, or oolong tea and a culture of yeast and healthy bacteria. Mmmmm, yeast and bacteria...

Luckily, tastes have changed tremendously since its creation in China around 220 BC from which it has been continuously touted as “the miracle drink” because of it’s infamous reputation as a cure-all.

This well-deserved claim is mostly due to a pancake-shaped substance called a SCOBY, which is an acronym for Symbiotic Culture of Bacteria and Yeast. A SCOBY is actually a floating microbial colony that not only helps with the fermentation process but also gives your body much of the goods it requires. The list of health benefits from drinking kombucha seems endless, so why is it on the “Food and Drinks to Avoid While Pregnant” list?

Reasons to Avoid Kombucha While Pregnant

Remember when I said that kombucha doesn’t have alcohol? Well, that’s not 100% true.

Michelle Routhenstein, FamilyEducation’s Nutrition Expert, preventative cardiology dietician, and owner of Entirely Nourished, says that kombucha offers various benefits including a dose of healthy probiotics. But, she also emphasizes that it should be avoided during pregnancy, especially because of the possible alcohol content.

“The fermentation process of kombucha adds trace amounts of alcohol,” says Routhenstein. “While if purchased in the supermarket it has 0.5% or less alcohol content, homebrews can average around 3%. The CDC recommends abstaining from all alcohol as a precautionary measure.”

The “cha” in kombucha actually means “tea” because it’s one of the main ingredients. What does black, green and oolong teas contain? Caffeine, which is a stimulant and diuretic. Because of this, most doctors recommend limiting or stopping caffeine intake throughout pregnancy and breastfeeding.

Luckily, caffeine isn’t a big contributor to pregnancy issues, but warnings should still be taken seriously. Data shows caffeine consumption of 300mg/d or less (about 1-2 cups of coffee a day) should be of little concern unless you are affected by high blood pressure and increased heart rate.

The SCOBY ferments the mixture of tea, sugar, and other added flavors, which results in healthy probiotics that make up the fizzy wellness-in-a-bottle. Sadly, many kombuchas, especially homebrews, are unpasteurized, “Meaning,” Routhenstein explains, “that it can harbor harmful bacteria like listeria, which is dangerous for pregnant and breastfeeding women.”

There are brands that offer pasteurized bacteria, but it’s nowhere near as advantageous.

Many health professionals agree that they may hold exceptions for people that have had long-standing relationships with kombucha. HeHe Stewart, a FamilyEducation Infant Development Expert and Doula says, “If you've been a long-time kombucha drinker well before your pregnancy, chances are you can continue to drink it without any problems.”

Stewart explains that if you are able to continue drinking kombucha, it has been known to help with morning sickness, immunity, heartburn, leg cramps, and even milk supply. “But,” she says, “you will want to double-check with your healthcare provider first as it may be suggested you limit your kombucha intake until baby arrives.”

Instead of Kombucha, Try…

In summary, despite all the benefits of drinking kombucha, experts highly recommend that you don’t drink it if you're pregnant or nursing unless you have extensive kombucha-drinking experience. If you don’t fall into the ‘booch-drinking category, all is most certainly not lost. In fact, you have a whole arsenal of options that give you the same benefits as kombucha, such as, “enjoying a cup of green or black tea and having a cup of kefir, yogurt, or sauerkraut, which reap the same advantages of what kombucha has to offer!” suggests Routhenstein.

If you’re looking for something packed with elemental goodies, Stewart is a huge fan of red raspberry leaf tea because, “not only is it rich in vitamins and minerals like magnesium, iron, Vitamin B, Vitamin C, zinc, and potassium, but it is also packed with antioxidants which are super helpful during pregnancy.”

For immune support, Stewart also recommends bone broth, onions and garlic, blueberries or apple cider vinegar. But, as always, “Be sure to double-check things with your provider before making changes to your diet or supplements.”

Enjoy your pregnancy and breastfeeding while it lasts…if all of the other items on the no-no list can wait, so can kombucha.

Wondering if you can drink coffee while pregnant? We've got the Ultimate Guide to How Much Coffee You Can Drink While Pregnant (with helpful ordering tips at Starbucks, Dunkin' Donuts, and more).