Do You Really Have to Quit Coffee When You're Pregnant?

Rachel Sokol
Can you still drink coffee if you're pregnant? Some people continue with their normal caffeine habit, while others swear it off. Which is right? Experts weigh in with their opinion and offer coffee alternatives at major chains, like Starbucks and Dunkin' Donuts, for pregnant women. Don't worry, you don't necessarily have to kick your PSL addiction!

Ahhhh, a morning cuppa Joe. Warm, relaxing, soothing, with a little pinch of milk and sugar…isn’t coffee the best? Like the 80s Folgers coffee commercials said, “The best part of waking up is Folgers in your cup.” It’s hard to give up your caffeine vice, especially if you’ve been a coffee drinker for decades.

But wait—can you still have coffee if you’re pregnant?! Is caffeine safe for a baby in utero? Or a mom-to-be? Put down your favorite mug (Oh come on! You know you have one) and listen carefully—no matter how tired and grumpy you are from sleeping on your side all night.

More: Can You Drink Kombucha While Pregnant?

Cutting back is recommended

Dr. Barrow adds that caffeine’s relationship to fetal growth restriction is unclear. Thus, it may be in your favor to cull the caffeine a little when pregnant. “Due to conflicting conclusions from numerous studies, the March of Dimes states that until more conclusive studies are done, pregnant women should limit caffeine intake to less than 200 mg per day; an average cup of coffee has 100mg of caffeine,” explains Dr. Barrow. “This is equal to about one 12-oz. cup of coffee.”

Since research is skill kind of “scatty” (for lack of a better word) regarding the caffeine/pregnancy connection, Dr. Barrow recommends limiting yourself (if not able to eliminate) to 1 to 2 caffeinated beverages per day when pregnant.

For more tips during the first trimester, check out our Pinterest board:

Before you succumb to your pumpkin spice latte craving this fall, check out this guide for what to order when pregnant at your favorite coffee chains.

Since its recommended to consume only 200 mg of caffeine per day, you might need to find some alternatives to your favorite drink at Starbucks, especially when your afternoon exhaustion kicked in.

“I always knew lack of caffeine consumption was going to be one of many challenging aspects of pregnancy,” says the mom. “I tried several alternatives, however for me Yerba Mate (an herbal tea) was the only one which really hit the spot. It tastes great, gives you a similar buzz to coffee without the shakes and crash, and I love it so much I still drink it regularly 2 years after giving birth.”

Manhattan mom Allysa H. was, at one point, “addicted” to Starbucks coffee. “Once I got pregnant, I ordered a half-regular, half-decaf Grande in a Venti cup so it felt larger than it was.”

Dr. Barrow thinks Allyssa’s pre-natal Starbucks choice was a good one. “Try half hot milk and half coffee—maybe even decaf or half caf—if anything; you will get a little extra calcium.”

Other Starbucks drinks that are safe for pregnant women: 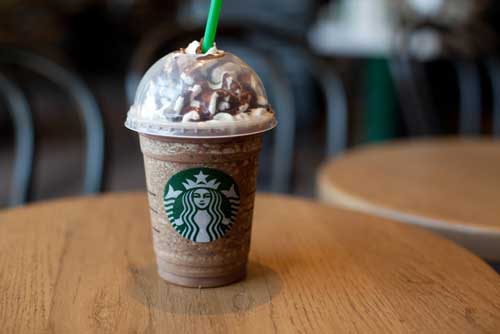 The easiest substitute you can make is to simply swap your hot coffee size to a small. The small original blend and dark roast coffees are under the recommended 200 mg daily caffeine intake.

Other Dunkin Donuts drinks that are safe for pregnant women: 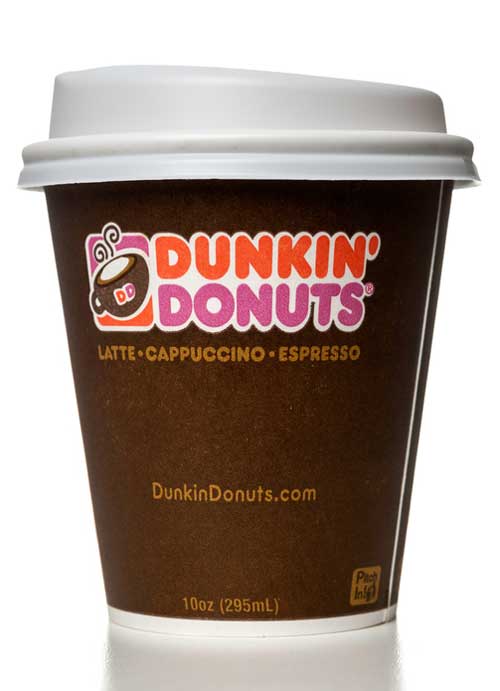 More: Top 9 Foods and Beverages to Avoid While Pregnant

If you’ve got a craving for a cup of Peet’s coffee, but don’t want the caffeine, consider ordering it decaf. I know … the idea of decaf coffee is considered a sin to some. You can also try ordering your typical Peet’s drink half caf.

For Peet’s, you can follow many of the rules that apply for Starbucks. Simply try to swap out the amount of caffeine (half caf), the size, or try a non-caffeinated beverage.

At Caribou, simply downsizing your morning coffee to a size small won’t cut it. A small cup of Caribou coffee contains 230 mg of caffeine. It’s best to stick to a small specialty espresso drink like the White Berry Mocha or Turtle Mocha. Most of these are under 200 mg.

Other drinks to consider at Caribou:

It’s important to note that the Depth Charge is a highly caffeinated beverage containing both coffee and espresso. Cross this one off the list if you are pregnant.

Other Coffee Alternatives You Can Make at Home

“Try some hot water with lemon” and, according to Dr. Barrow, “you will at least be able to continue the habit of holding a steaming hot mug in the morning.”

“When I was pregnant with my second child and wanted to cut back on my caffeine intake, I would drink hot water at work in my Starbucks ceramic mug,” says Coldwater, Ohio mom Rachel Stephens. “With morning sickness, many flavors made me queasy, including hot cocoa. The feel of drinking from a warm mug helped curb my cravings and the hot water soothed my stomach from nausea.” 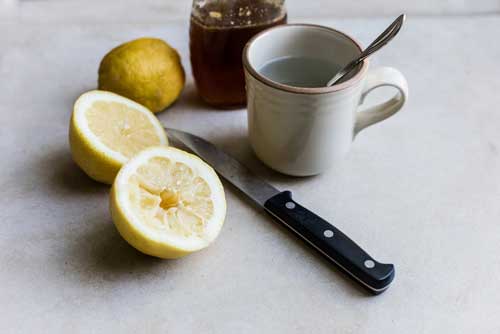 Fitness instructor and new mom Taylor Walker of Miami, FL, consumed “at least two cups of coffee per day prior to my pregnancy.” Since its recommended to consume only 200 mg of caffeine per day, she had to find other alternatives, especially when her afternoon exhaustion kicked in.

With the OK from her doctor, Walker turned to Premier Protein Clear, which has 90 calories and 20 g of protein, as one of her coffee alternatives. “I loved this drink because it is a safe and effective way to both hit your hydration and protein goals,” she explains. “As my pregnancy progressed, I was drinking a ton of water but found myself getting bored trying to drink 70 oz of water per day. Clear Protein drinks were a great alternative. Since I worked out until the last stretch of my pregnancy, I enjoyed this drink as a post-workout recovery aid.”

Walker also recommends raspberry leaf tea to expectant moms, “which is chock-full of vitamins and minerals and is said to help strengthen the uterine walls and speed up labor. I had a drug-free water birth and my labor from early labor to delivery was less than 12 hours. So, I think it definitely helped and it was a great alternative to coffee in those final few weeks.” 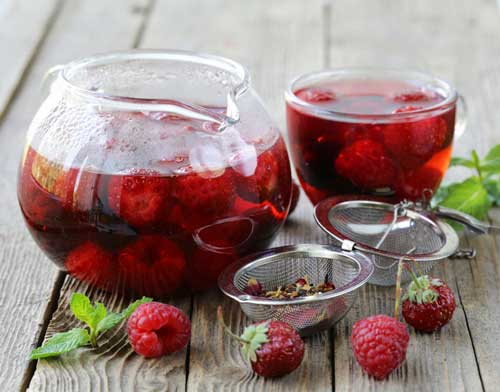 Overall, when cutting back on your coffee while expecting, consult with your doctor on drink alternatives and remember, says Dr. Barrow, that caffeine is in many things, including chocolate and root beer.

As for Dr. Barrow herself, she didn’t totally ditch her morning cup of coffee when preggo. “I chose to limit myself to my one cup of coffee that I like to have in the morning. Outside of that, I stuck with drinking mostly water.”