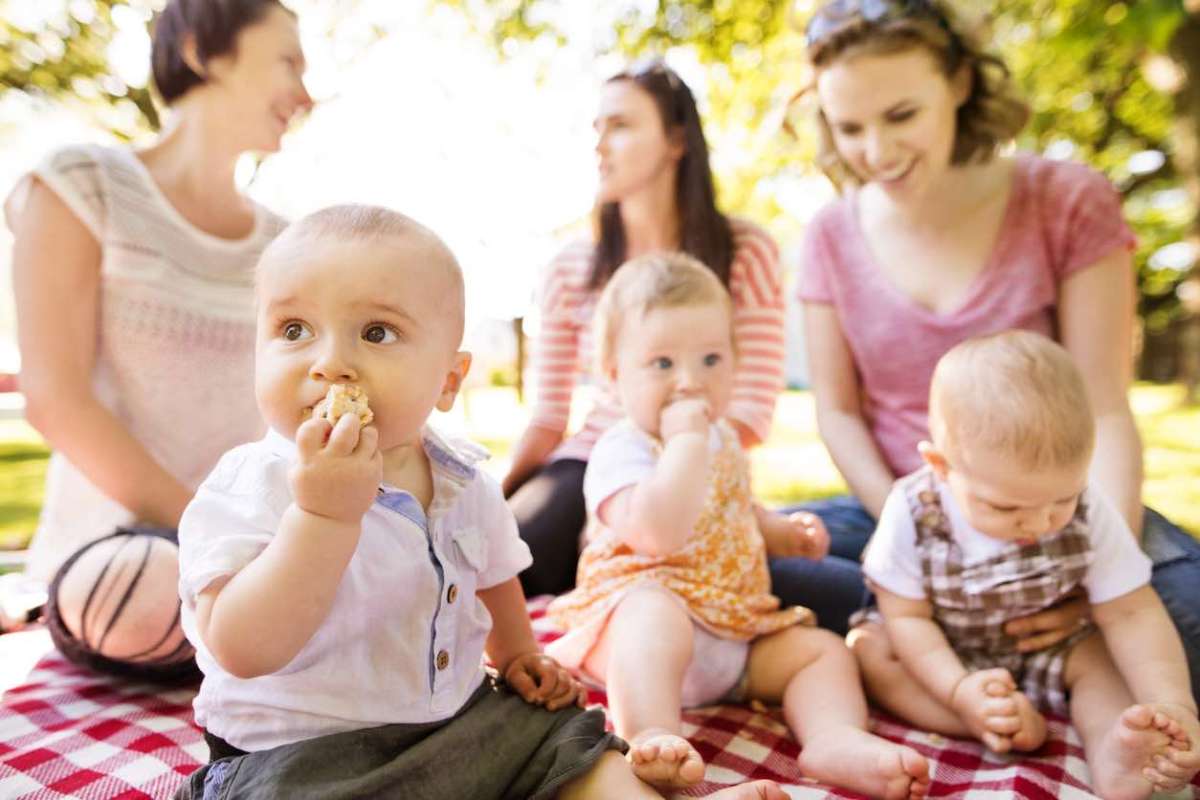 All My Friends Have Kids and I'm an Empty Nester

Having kids before all your friends means your lives are at different stages. How to make mom friends you can relate to.
Erica Loop

A baby? In my mid-20s? Nope. No way. That was something I never saw happening for me. But then I got married — to a man 10 years older than me. His friends all had kids. And it was pretty clear that he wanted one of his own.

So, he volunteered us to babysit for his friends’ littles, agreed to backyard barbecues with his family-focused buds, and pretty much oohed and aahed over every kiddo we walked by.

At the time, I worked with kids — and 40 hours a week spent with four-year-olds was good enough for me. But it didn’t take long for me to want one of my own. Just shy of my 26th birthday, I was pregnant. Now I’m in my 40s with a 21-year-old  son.

And my friends? Sure, they were happy for me. But we were in two very different places back then. Fast-forward two decades, and that hasn’t changed.

Related: How to Stay Social When You’re a New Parent

The Maternal Ages is Getting Higher

According to the U.S. Centers for Disease Control and Prevention (CDC), in 2020 the mean age of a woman giving birth for the first time was 27.1 years old. This is up from 2000 when the average age to have a baby was around 25. By 2001, the number of women in their 20s giving birth for the first time was on the decline. But the maternal birth rate was actually growing for women 30 and up!

Fast-forward a few decades and things haven’t changed. First births to women in their 20s were at a record low in 2020. While there were declines in all age ranges, the pandemic-era pregnancy and childbirth dip of 2020 wasn’t as pronounced for older mothers as it was for the younger set.

If you have any doubts that the overall maternal age is getting older, check out one of the CDC’s Vital Statistics Reports from the ‘90s. In July 1997, the CDC published birth data from 1995. The report gives stats for first-time mothers in their teens, 20s, and 30s. But it doesn’t even include a section for women over 39! Now, there are more women in their 40s having kids than ever.

Even twenty years ago, 26 was still on the younger side of first-time parenting. Not only were the other parents at daycare and school events older than me, but my friends from high school and college were also still in the party and adventure stage of life.

While my friends were enjoying tequila shots at the after-hours club until 3 a.m., sleeping til noon, and backpacking from hostel to hostel across Europe, I was hanging out on playgrounds and renting Disney movies.

Finding Mom Friends When You Don't Fit In

During my broody, artsy high school years I swore I’d flee the upper-middle-class suburb I’d grown up in and never look back. While I did leave for a while, by the time I had my son I realized the tree-lined streets, ample park spaces, and top-notch schools were a reason to move back.

What I didn’t realize was that my old/new community was now filled with professional mamas who had taken time to build their careers — and delayed childbirth. It became painfully clear to me that I didn’t fit in.

It also became painfully clear that the other mothers assumed I was the nanny. I’d look around the park and see women who were at least a decade older than me. They sat in groups, chatting about work, their husbands, or the latest books they’d read. They had designer diaper bags and crazy-expensive strollers.

I lived paycheck to paycheck and relied on help from my family just to keep my head above water. This was not my parenting community.

While the other moms in my neighborhood were not exactly becoming my new “community,” my former community (a.k.a. my friends from high school and college) were also slowly drifting away. They lived in the city and would only come out to the suburbs once in a while.

They were busy working, dating, drinking, traveling, and spending leisurely weekends doing absolutely nothing. I was changing diapers, reading A, B, and C board books, and waking up at 5 a.m. every day.

Let’s face it, there was nothing remotely fun about hanging out with a super-tired new mom and her crying newborn for my 20-something single and childless friends. They continued to invite me out with them — for a while. But somewhere around the fourth or so turn down, they stopped. I just didn’t have the energy to drive into the city after a full day of mom life. Their typical 10 p.m. starting time sounded way too late for someone who had to wake up at just before dawn the next day.

Luckily, this was all happening in the pre-Facebook/pre-Instagram period. If I had to look at a steady stream of pics and posts featuring my BFFs clinking wine glasses and doing shots at bars with random people they just met, I’m not sure I would have dealt with it as well as I did. Instead of wading in the muddy waters of self-doubt and FOMO-ness, I threw myself into parenting. And for the time being, my son became my community.

The Flip: All Your Friends Want Your Parenting Advice Now

As the years went by I did eventually make a few true mom friends. My son started Pre-K and I spent the half-hour before pickup sitting and talking to one of the other moms (until her family moved back home—to Germany). When he moved up and into elementary school, I became close with a few of my son’s friend’s moms too.

By the time my son was a full-fledged grade-schooler, I was in my early 30s and a few of my non-mom friends were now married and starting families of their own. Ah, finally!

After my son went to sleep, I spent hours on the phone with my college BFFs, helping them through the pains of pregnancy and the tough new parent times I was in the know about the top baby shower gifts and became the go-to girl for all things parenting. But I still didn’t really have my community back.

Even though my non-mom friends were now moms, the age difference between our kiddos made it almost impossible to hang out. So, they went to the park, took their littles on stroller hikes, and did all the things I had done years before—and without me.

Being a Young Empty Nester

At 42 I had friends with toddlers and preschoolers. My son was graduating from high school and leaving for college. I was officially an empty nester. Instead of my friends having all the free time in the world to do whatever they wanted whenever they wanted, I was the “childless” one. Yes, I still had a child. But he was an hour away at school. And I was the one getting turned down for fun nights out.

This time I was the one texting, only to get a, “I can’t, it’s too late” or, “Ugh, I don’t have anyone to watch the kids” message back. I felt alone — and honestly, kind of bored.

There are worse problems to have than too much free time. As someone who threw herself into parenting 24-7, the whole not having a child around thing was a shock to the system.

As the saying goes, make new friends but keep the old. I’ve made new friends and found new communities over the years. They’ve grown, shrunk, and changed with me.

My best friends are still the same group of women I’ve known for decades. Yes, we drifted apart at times. But we’ve also come back together. Along the way, I’ve also added in new friendships, pruned some out, and created an eclectic (and supportive) community.

It’s 10 a.m. on a Tuesday and my Facebook feed is filled with the obligatory back-to-school pics. Adorable photos of my friends’ preschoolers and elementary-aged kiddos dot the digital landscape. But my 20-year-old son is at college, in his own apartment, and he has a beard now.

A real, grown-up, full-on beard. I’m in tears. Where did my baby go? While I’m all for celebrating my friends’ families, I realized that I also don’t need near-constant reminders that the days of dino-covered lunch boxes and velcro sneakers are over. On the first day of school each year, a  social media break is certainly a way to keep those empty nester blues away.

Yeah, yeah, I know I just said to ignore it. But social media is the ultimate community. From reconnecting with my elementary school BFFs to joining a Facebook group for parents of children with type 1 diabetes who are in college I found lots of moms to relate to. (And yes, my son has type 1 diabetes. And yes, this group shows just how almost oddly specific FB groups are).

And then there’s rediscovering yourself. I went back to grad school when my son was a toddler. After completing a master’s degree I stopped short of going for a Ph.D.

My reasoning was — why not wait until my son was in college and go back to school then? While that didn’t happen for me, it is an example of what could have been. Or, it’s something that I could still do!

Are you about to become an empty nester? Is a new degree in your not-so-distant future? Check out these great tips for going back to college as an adult!