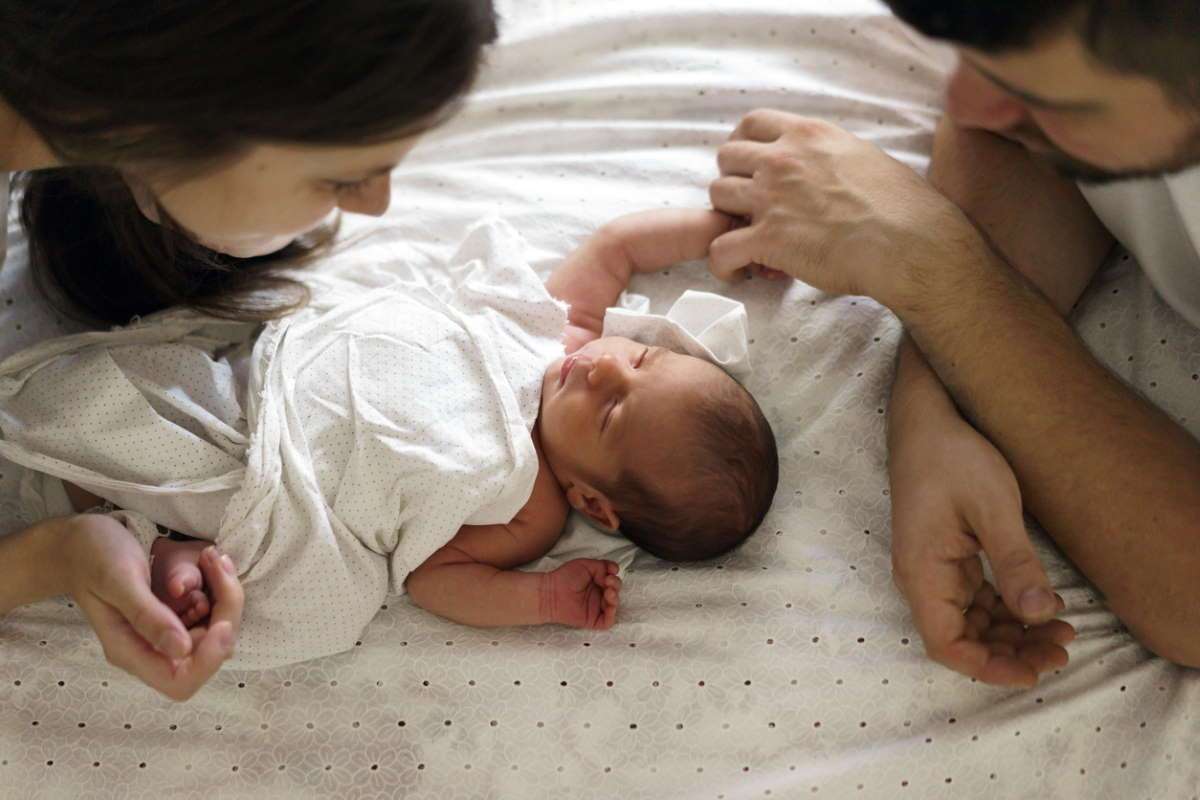 My Baby Looks Nothing Like Me: A Genetic Explanation

Before you get paranoid that your child was switched at birth, it’s best to understand that the culprit is most likely genetics. This article explains some of the most common genetic reasons why you may not share any physical similarities.
Miranda Altice

The creation of a human body goes far beyond simple building blocks. For around nine months, the womb meticulously assembles microscopic fragments of DNA from both parents to create a unique individual. During that time, parents anticipate how the baby will look. Will she be tall like the father, have dark skin like the mother, or soft green eyes like both?

Excitement builds as the time approaches to lay eyes on your mini-you…until your baby is born, and you notice, “My baby looks nothing like me!”

Before you get paranoid that your child was switched at birth, it’s best to understand that the culprit is most likely genetics. Although genetics has a hand in turning the baby into a mini-you, the same players also morph him into a mini-not-you. This article explains some of the most common genetic reasons why you may not share any physical similarities.

Many people believe that if both parents have brown eyes, their children will have brown eyes. Or, if one parent has brown hair and the other blonde, the child will have one of the other. But what happens when the child of brown-eyed parents has blue, or the neutral-haired family produces a fiery red-head?

Dana Bressette, a genetics specialist and FamilyEducation expert, explains that genetics doesn’t really guarantee that we will share features with our offspring. This is because of the nature of genetics and the different players in court. Our physical features mostly rely on inheritance, which is the process by which genetic information is passed from parent to offspring. Inheritance is the reason why family members have similar features and characteristics.

“The genes for traits are coded onto our chromosomes,” Bressette says. “You get one from mom and one from dad for each of the 23 chromosomal pairs. Some traits like hair color and eye color are polygenic, meaning that they aren’t just controlled by one gene, but by many genes (poly=many). Because of this, it's easy to understand the variability observed in traits like hair color, eye color, or height.”

To put it into more perspective, even though there are two major eye color genes, more than 14 other genes could affect a person's eye color. Phenotypes (observable physical features such as eye color) are produced by certain genotypes (gene variants). For simplicity's sake, we can explain this through sneaky recessive genes.

Dominant genes are more influential than recessive genes and control a large portion of how your baby looks. But, as with anything in science, it’s more complicated than that.

Two brown-eyed parents can have a child with light-colored eyes if they both carry recessive blue genes. Recessive genes keep things very interesting because if blue eyes are somewhere in the family tree of both parents, then they will be passed to offspring, whether it's shown in their physical features or not.

If there are two joined copies of the recessive gene (like blue eyes), the child will have blue eyes, even if all of his siblings boast chocolate browns.

But for more visual people like me, you can see how this works with what biologists and geneticists affectionately call Punnett Squares.

One of the ways geneticists help to exercise probability is through a Punnett square, a diagram used to predict the potential genotypes your offspring will have. These include hair and eye color, skin tone, height, genetic diseases, facial features, etc.

The Punnett squares can be extremely advanced with numerous boxes, or as simple as a four-boxed diagram predicting eye or hair color for each offspring. The capital letter denotes a dominant gene, and the lower case letter indicates a recessive gene.

“If you look at the Punnett squares for eye color,” says Bressette, “you can see how parents with brown eyes can still have a child with blue eyes. There was no switching at birth - it’s completely possible!”

Let’s consider a family who had a daughter with red hair when neither of the parents has red hair. My Punnett square shows the big R as the dominant gene, and the little r is the red-head recessive gene.

Both parents have a sneaky recessive gene for red-hair floating around in their genetic make-up, so the child who ends up with two of them joined together rr is the grand prize winner of red hair. The genes, including a higher chance of freckles and light skin, will then pass to her offspring. (Check out: What Are the Chances My Baby Will Have Red Hair? A Genetic Explanation.)

Depending on the dominant and recessive combination of genes, the parents can also give insight into how many kids may have a particular eye color. For example, this image shows a Punnett square with a mother who has two recessive blue eyes bb and a father with one dominant brown and one recessive blue Bb.

Another thing to consider beyond genetics is environmental factors and how they may separately affect the parent or the offspring. Consider a father who works outside most of his life. His skin may take on a darker tone from consistent UV rays. A mother may have gotten a minor nose job, or either parent could have a slight deformity of a physical feature.

The mother's diet and health during pregnancy can also affect the baby's features, mostly in height and weight. Premature birth, diseases, poor nutrition, and environmental toxins could also cause differences.

What To Do If Your Baby Looks Nothing Like You

You’ll have plenty of other things to worry about in the future, and that you weren’t given a clone is the least of them. Marvel at your baby’s differences. It might even spark more curiosity into the fascinating world of genetics and your family history. Does your baby have a dash of red hair that no one in your current family can claim?

In my experience, I found the link to my strawberry blonde color from stories about my great-great-grandmother. Then after doing my AncestryDNA, the remaining phenotype pieces began to fall into place.

“I think it's important to take a step back and give newborn babies a chance to begin forming a new identity as their own person,” says Massie. “Unless there is reason to do testing of the true biological parent, embrace and enjoy the newborn snuggles without the added worry of the baby’s image.”

And what’s even more bizarre is that your baby’s looks are going to change whether you like it or not. “There are so many factors of generations of DNA that could influence the way a baby looks and the fact the babies change their looks so often and quickly in the early days.  Babies can look quite different days and weeks after birth.”

As the child gets older, more and more genes will start to activate. This is especially true when hormones kick in, and then bone structure begins to really develop when they reach their 20’s. That’s why some features won’t be fully revealed until adulthood. So, if you aren’t noticing any similarities yet, just wait. Just like parenthood, your child’s looks will be an interesting rollercoaster!

If all of this genetics talk has you considering researching your genetics and relatives, first check out 5 Questions to Ask Yourself Before Starting Genealogy Research.

Did you find this helpful? Pin it to save it for later: 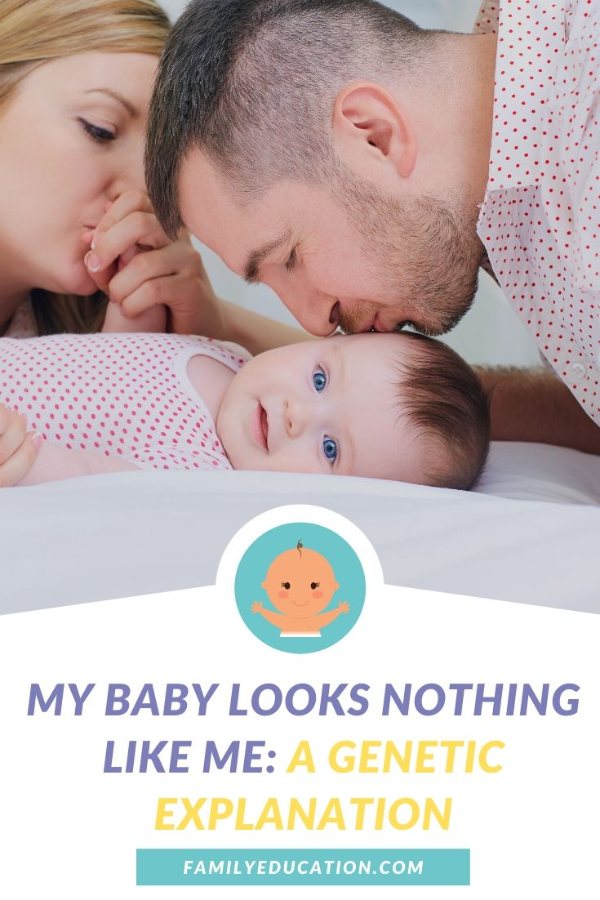