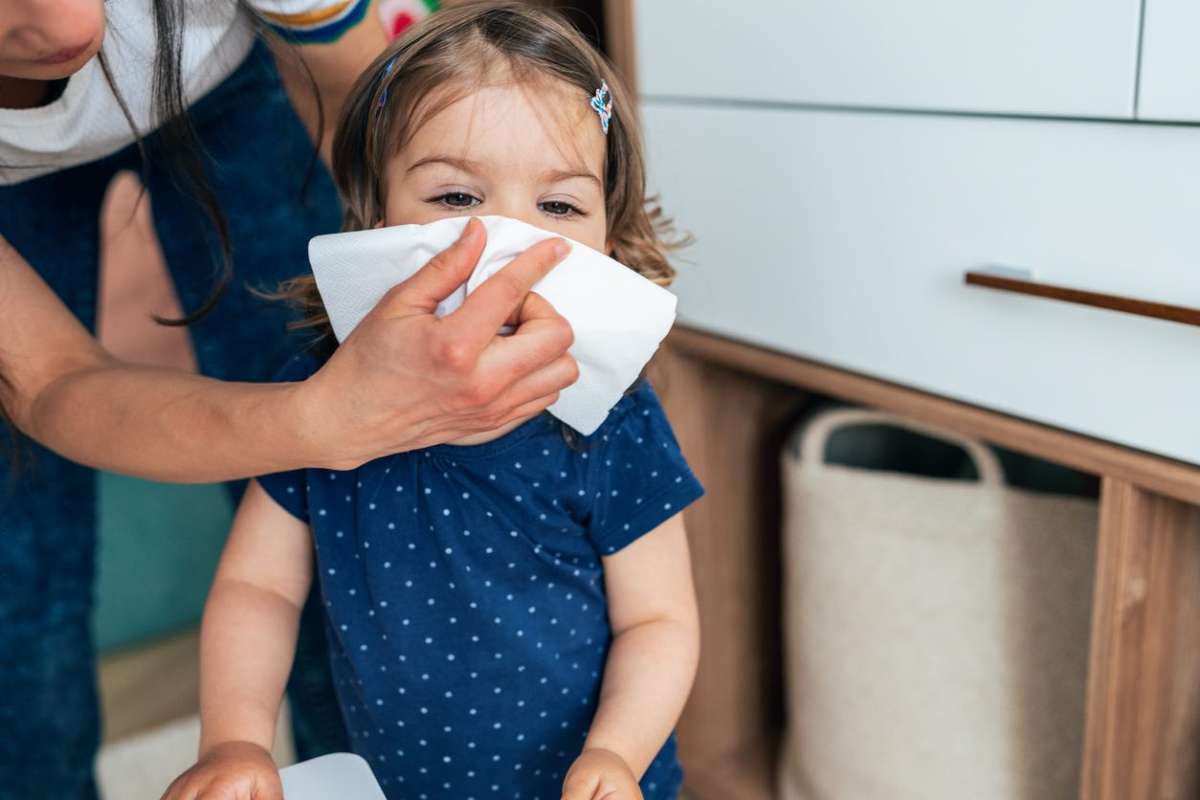 Why Does My Toddler Always Have a Runny Nose?

A mother shares her top tips for dealing with runny noses in toddlers and explains some common culprits.
Katharine Chan, MSc, BSc, PMP

We all know kids catch a cold frequently because their immune systems are still developing. But sometimes, that runny nose just won’t go away. All that sniffling, sneezing, snorting and dripping can be both worrisome and frustrating for parents.

In addition, if a preschool has a strict sick policy, you may have no choice but to consistently keep your child back from preschool. This can eventually lead to concerns about child development and education, and it can also be hard for parents who do not have suitable alternative means of childcare.

This article dives into the common causes of a runny nose in young children, how long it will typically last, when you should take your child to the doctor, and some gentle remedies to help your child feel better.

Common Causes of a Runny Nose in Young Children

A runny nose occurs when there is excess nasal mucus that is draining out of the nose. This is often accompanied by nasal congestion (stuffy nose).

A stuffy nose isn’t actually caused by a build-up of mucus; instead, it’s because the tissue and blood vessels in the nasal cavity are swollen and make it harder to breathe through your nose.

Here are some common causes a runny nose in young children:

Because toddlers tend to be very tactile, they frequently touch their eyes and nose and put things into their mouths. It’s therefore easier for them to catch a virus than it is for adults.

A runny nose could mean that your toddler picked up a cold. The purpose of the mucus that your child produces is to help eliminate the cold virus from the body.

The flu (influenza) is a contagious virus that attacks the respiratory system and causes infection in the nose, throat and lungs. It is less common than the cold and can also cause a runny nose.

It can be transmitted when someone touches an infected object and then touches their nose, mouth or eyes. Someone can also catch the flu by inhaling the droplets that are produced when a person with the flu talks, sneezes or coughs.

For a child under the age of five, catching the flu can be harmful. That’s why it’s so important that children are vaccinated against the flu. Additional things you can do to help prevent the spread of the flu include practicing good hygiene by washing your child’s hands frequently and using hand sanitizer.

There are multiple types of environmental allergens that can cause a runny nose. Examples include pollen, house dust mites, pet dander, grass or weeds and mold. Some of these are more prevalent during certain seasons. Determining whether your child is truly allergic to something requires a visit to the doctor and an allergy test.

When a child is exposed to an allergen, it can cause allergic rhinitis. Allergic rhinitis occurs when the body’s immune system overreacts by increasing blood flow and fluid production to fight off the ‘foreign’ invader.

Some allergy symptoms include:

Sinusitis is inflammation of the sinuses. It is also referred to as a sinus infection. Sinuses are the empty spaces located between our eyes, behind our forehead and cheekbones. They are responsible for producing mucus.

Adenoids are small lumps of tissue that sit at the back of the nose, above the roof of the mouth. You cannot see your child’s adenoids by looking in their mouth or down their throat.

Adenoids are part of the immune system, which helps fight infection and protects the body from bacteria and viruses. Children have bigger adenoids, which start to shrink as they get older. They usually disappear completely by the time you become an adult.

It’s not unusual for a child’s adenoids to become enlarged or swollen. This can be caused by a viral or bacterial infection, or after a trigger such as an allergic reaction. For most young children, this will cause mild discomfort and you won’t need to seek treatment. However, for some children, it can cause severe discomfort. If your child has swollen or enlarged adenoids and it is interfering with their play and wellbeing, seek advice from your child’s doctor who may refer you to an ear nose and throat specialist in order to determine whether or not your child’s adenoids need to be removed.

The healthcare professional may decide to remove your child’s adenoids if your child is experiencing breathing problems, difficulty sleeping, recurrent middle ear infections, or recurrent sinusitis which leads to a constant runny nose. Removal of the adenoids should help your child’s runny nose resolve.

How Long Should a Runny Nose Last?

The symptoms of cold and allergies are often the same. However, a cold will usually go away after 10 days whereas allergies tend to stick around depending on the season and how often and at what intensity the child is exposed to the allergen.

Most children with the flu will recover within a week.

When Would Your Child's Runny Nose Require Medical Attention?

Most of the time, a runny nose isn’t a cause for concern. However, if your child’s symptoms are beyond what is normal, it’s important to seek medical attention.

Some of these signs indicate that you need to visit your pediatrician:

You should seek immediate medical care if your child experiences any of these symptoms:

The American Academy of Pediatrics states that children under 4 years of age should not be given over-the-counter cold medications such as decongestants and antihistamines. These are not only ineffective but can cause severe, potentially life-threatening side effects for younger children.

There are remedies that can be performed at home to help your child feel better. Here are some top tips:

There can be many different reasons why your child has a runny nose. It’s important to consult with your pediatrician or healthcare professional before trying to diagnose your child’s illness or starting any new treatments.