Rachel Sokol
Before sending your kids off to college, there are a number of big talks you should have with them and one should be about sex. No, this is not "the talk". This conversation should focus on consent, sexual misconduct, and the issues on college campuses that we continue to see in the news.
Table of contents

Just before your teenager heads off to college, you should have “the talk” with them. Nope, not the SEX talk. There’s a pretty good chance they already know about that 3-letter word. We mean the consent talk; meaning ways to tell the opposite sex NO like you mean it and what to do if someone overall makes you feel uncomfortable through sexually-orientated actions. Here’s some advice from therapists on how to approach this serious conversation with your teen that’s not TOO awkward for all of you.

More: An Age by Age Guide to Teaching Your Kids About the Birds and the Bees

What should WE, as parents, know about this topic?

“Teens find information, and misinformation, about sex from a variety of sources: parents, friends, culture, and media,” says Kristen Arquette, M.ED, LMFT, CDP, MHP, CMHS a licensed marriage and family therapist based in Bellevue, WA. “The most important information about sex for teens comes from parents.” Also, it’s NOT necessary to be an expert on sex or sexuality to have influential conversations about sex with your teen. “Discuss the facts, and link them back to your personal and family values pertaining to consideration for others, sexuality, and concerns for sexual health.”

What kind of manner should I be in so my kid takes me seriously? 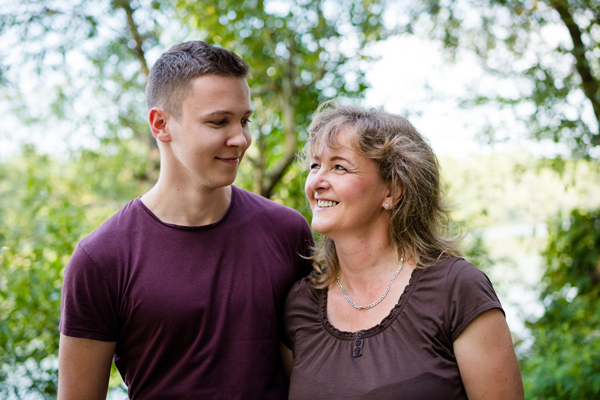 “Stay calm and positive. Encourage your teen to talk as much as they listen,” advises Arquette. “It’s a conversation, not a lecture! Give them permission to disagree with you, and explore why if they do.” Explore how your expectations for your teen’s behavior will change, adds Aquette, as they get older, go off to college, and enter committed relationships, and what the new expectations look like. “For example, ‘while I would prefer that you wait to have sex and drink,  I know your choices may be different and I will always help you when you need me.’

Says Jill Whitney, LMFT, a licensed marriage and family therapist based in Connecticut: “The key to getting teens to listen is not being preachy. Make your conversation a thoughtful dialogue, not a lecture. Your kid is an emerging adult.” Also, she says, respect their intelligence and their capacity for reflection. “If you're trying to impose your ideas, they'll shut down. But if you're genuinely interested in their perspective, you'll get them thinking. That's valuable whether or not they tell you much.”

Also, assume they know a lot about sex, whether or not they've actually had it, advises Whitney. “They've certainly talked with friends and likely have seen pornography. What they might not be thinking about is sexual choices. Point out that when they're living in a dorm, no adult will be policing their sexual behavior, so it's on them to choose what's right for them.”

For example, says Whitney, “You might say, ‘If you don't want to have sex with someone, I really hope you won't.’ Think about what you might say to someone who's pressuring you. Having a sort of script in mind will make it easier to say ‘No’ in the heat of the moment. And if you want to say Yes, you should mean it. Don't agree to do something at night and then complain about it in the morning.’”

How can we eliminate the awkwardness?

“It's actually okay if these conversations are awkward,” says Whitney. “We don't often have serious conversations about sex; it's not something most of us are comfortable with. Do your best to feel calm and grounded when you talk with your kid, but don't worry too much about feeling awkward. Feel awkward, and talk anyway.”

Also, says Whitney, a great conversation opener is reading together the college's policy on sexual expectations. “What does it say about sexual assault, affirmative consent, and so on? What does your kid think about the policy and how it's written? Compare your kid's school's policy with the policies at colleges their friends are going to. What are the differences? What tone does each policy have? What do they think makes the most sense? Your goal is to get them thinking about the kinds of situations that can happen and how things might go wrong.”

According to Arquette, bring in something relatable to connect with your teen.  “Allow the conversation to occur naturally. Take advantage of teachable moments by paying attention to the lyrics of your teen’s favorite music, topics addressed by their favorite TV shows, or current events.”  Adolescents, she adds, are often more comfortable talking about a third party than they are talking about themselves. “Spark discussion with questions, such as, ‘if two friends go home together after a party, what do you think each person wanted? Does it mean they’ll have sex?’  Make sure to model how to consider each party in your own answer.”

Ok, now how can we be firm about potential consequences? 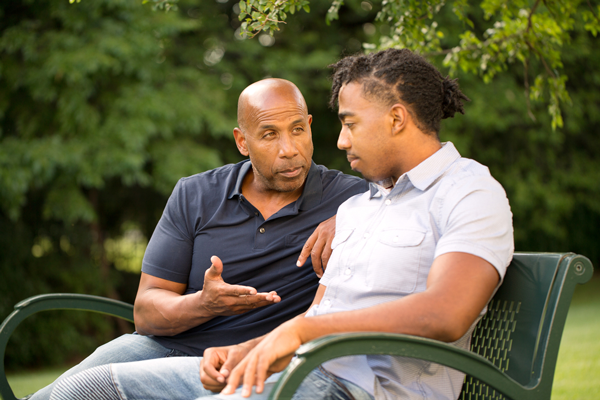 “It's helpful to state your expectations about how your child treats other people,” says Whitney. “It probably won't work to tell them to not have sex, even if you really hope they won't. But you can say, for instance, that you feel very, very strongly that if they have sex, they should use a condom every time, as well as another form of birth control. That protects both people.”

You can say that you expect them to treat sexual partners well, adds Whitney. “For instance, ‘I'd be horribly disappointed in you if you ever sexually assaulted someone, or even did something that made the other person feel bad. I know you're a good person. I'm counting on you to be a respectful partner and never take advantage of someone who was drunk or vulnerable.’"

Notice, points out Whitney, how this language acknowledges that your kid gets to choose how they behave, but also gives them a moral framework for making good choices.

How alcohol comes into play

According to Whitney, it's super-important to talk about the role of alcohol in campus sexual assaults. “Drinking makes people vulnerable to being assaulted and to becoming a perpetrator, because it impairs judgment and increases impulsiveness.”

Even "good guys" can get out of control when they've been drinking and end up assaulting someone who isn't fully on board with the sexual activity, says Whitney. So, make sure your kid knows that alcohol isn't an excuse. "I know most kids drink at college. But you shouldn't get so wasted that you're out of control. Being drunk is never an excuse for doing something that hurts someone."

Also, says Whitney, talk to your son about the fact that a lot of aggressive sexual behavior is intended to impress other guys. If you think that's kind of sad, say so. "Sex is a beautiful thing, but only when both people are really on board with it. It's between the two people, no one else. I'd think less of you if you pressured someone to have sex just to show off to other guys. I hope you're strong enough to make your own choices about sex and everything else."

“Girls may be pressured to drink more than they want to, “ says Whitney. “Talk with your daughter about keeping safe. She should never drink punch or a drink mixed by someone else, because there's no way to know how much alcohol might be in there or whether other drugs have been added.”

Also, remind her that beer that she opens herself is safest. “She knows what she's getting. She should maintain control of her cup at all times so no one can spike it. If she puts it down to go to the bathroom or something, she should get a new cup. Cups are cheap,” says Whitney.

And finally, point out that going upstairs to someone's room increases the chances of something going wrong, advises Whitney. “If she actually wants to sleep with the guy and trusts that he'll stop if she changes her mind, that's one thing. But if she doesn't quite know what she wants, feels pressured, or is too drunk to think straight, she's safer staying with the larger group or walking home with a trusted friend.”

What other sexual conduct/consent topic should parents zero in on for their kids? 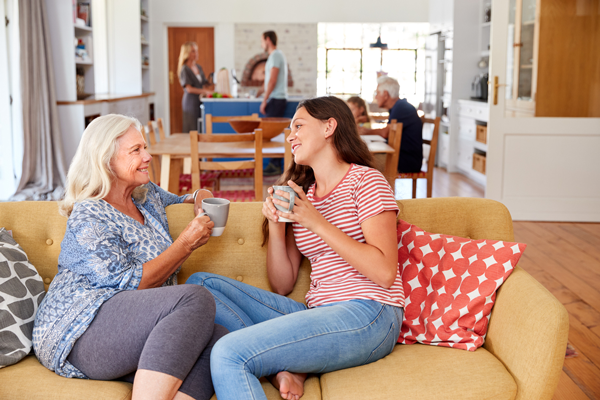 “Girls and boys need to understand that consent is communicated verbally and nonverbally and withdrawn at any point,” says Arquette.  “While most teens understand the basic concept of consent, that “no means no,” they struggle to apply the concept to interactions.  Instruct teens on how to obtain consent, by going slowly.  Ask questions like “do you want to go further?” or “does this feel good?” Wait for reciprocation or a response before going further.  If they say no, brush off your hand, or don’t respond at all, stop and ask before going further.”

Arquette also stresses this: “Make sure teens are aware of all the different ways coercion may be used to influence consent, including persuasion, pleading, guilt-tripping, providing substances or encouraging use, using verbal threats, or manipulation.”  Pay attention, she says, to these red flags, and excuse yourself if they occur. :Team up with a friend and use the buddy system, so that if you’re unable to exit the situation, there’s someone else who can intervene or get help. Emphasize that if coercion is applied, they did not consent.”

What is the best way parents can earn their teens trust and vice versa?

”Building trust with teenagers requires fighting through parental anxiety, exercising restraint, holding realistic expectations, and showing unconditional love as your teenager will invariably make some mistakes,” says Arquette. “Try to understand why your teen thinks, feels, and behaves the way that they do, and communicate your understanding even if you do not always agree.”

She adds: “Be a role model for trustworthiness. Be where you say you’ll be, and do what you’ll say you do. And just like your teen, you will make mistakes too.  The way you navigate those mistakes with resiliency and showcase your struggles serves as a powerful example to help teens realize that when they mess up, they can come to you.”

And finally, emphasize that in order to gain your trust, your teen must engage in trustworthy behaviors.  “Define the types of behaviors that earn your trust, and connect those to the benefits your child will earn such as being able to go out with friends, stay up later, or use the family car,” says Arquette.

Sexuality, says Arquette, evolves throughout a person’s life.  Your and their perspective and concerns about sex and consent will likely change on an ongoing basis, as will your relationship with each other. “ Teens will benefit more from an ongoing discussion than a one-time conversation, so communicate your willingness to readdress the topic and answer questions as they come up.”