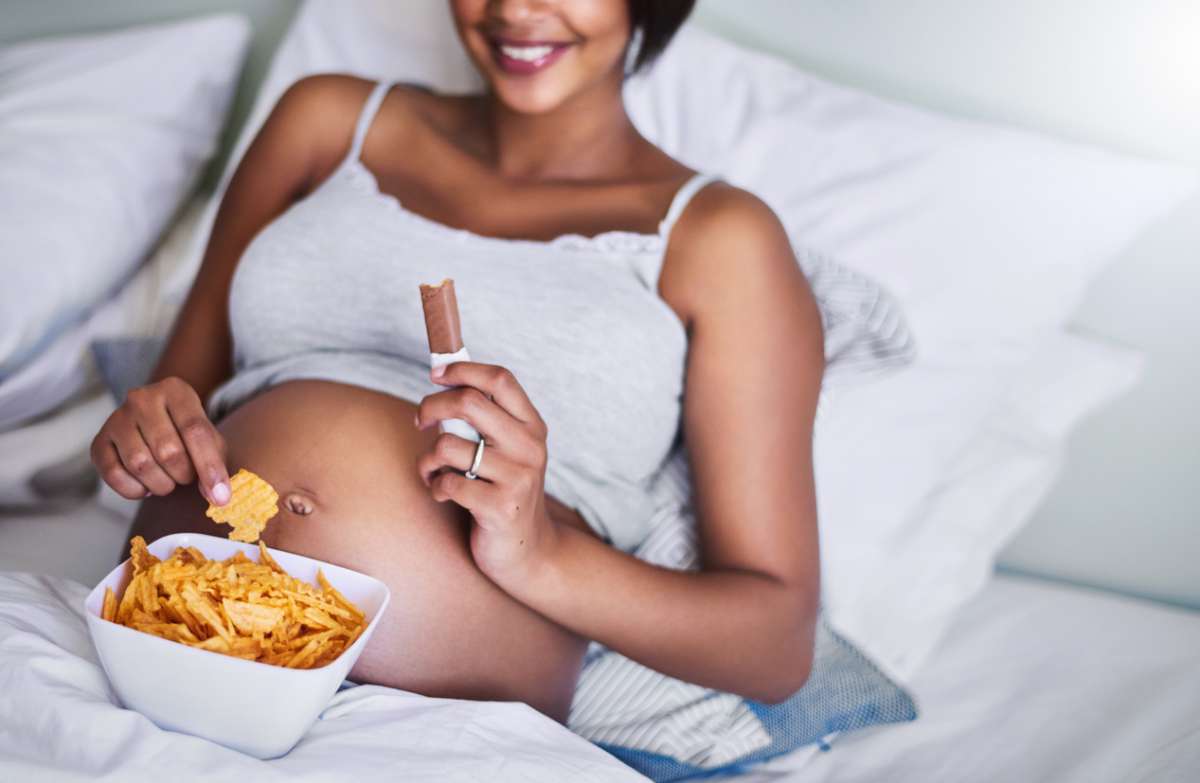 The diet at the time of conception may cause permanent changes in the DNA of children.
Jacqueline Weiss

While the effects of diet during pregnancy on the fetus have been debated and discussed, recent research indicates that the diet at the time of conception and the early period of the first trimester may cause permanent changes in the DNA of children.

A study published in Nature Communications is the first to show that an environmental factor can change a baby’s DNA long-term during the first few days of development. Conducted for two years across 34 villages of The Gambia in Western Africa, the results show a child’s genes could be differently interpreted based on the mother’s diet.

In the study, women’s diets in rural areas of The Gambia were analyzed, where residents underwent significant changes in their servings throughout the year as the area went through dry and rainy seasons.

Study author Robert Waterland, a nutritional epigeneticist at Baylor College of Medicine in Houston, shared with Scientific American: “The rainy season is often referred to as ‘the hungry season,’ and the dry season ‘the harvest season.’ During the rainy season, villagers have much more farming labor to do, and they gradually run out of food from the previous harvest.”

A healthy diet for pregnant women is vital from conception until six months after delivery when the baby starts to form its antibodies, and breastfeeding can be withdrawn slowly.

While in The Gambia, yearlong staples of the women’s diet consist majorly of cereals, including rice, millet, peanuts, and tubers like cassava; in the rainy season, they consume more leafy greens like spinach, which are high in folate (a nutrient found in most prenatal vitamins).

Methylation is a so-called epigenetic modification to DNA, which can silence the expression of a genre. Typically, methylation depends on key nutrients such as choline, folate, methionine, and B vitamin (B2 and B6). In this study, methylation was linked to the various nutrient levels in the mother’s blood.

“Our results represent the first demonstration in humans that a mother’s nutritional well-being at the time of conception can change how her child’s genes will be interpreted, with a lifelong impact,” senior study author Branwen Hennig of the London School of Hygiene & Tropical Medicine, said in a statement to Scientific American.

The period of pregnancy is one of the most critical periods in the life of both the mother and the child. Many factors that affect pregnancy have been in motion for decades. In terms of Nutrition, they become essential right from the time the mother intends to conceive.

A balanced diet is not negotiable during pregnancy. Healthy eating ensures that once the fetus begins to develop, every nutrient the baby needs can be provided by the mother. The mother’s food sources should also consistently increase; as the fetus grows, the mother needs extra calories to keep up with the pregnancy.

Prior to conception, the health of a woman is among the many factors that aid fertilization and the early processes of cell divisions that ultimately leads to implantation. Most women do not know they are pregnant until a few weeks into the pregnancy, by which time crucial early brain developments have taken place. At this stage, women with folic acid deficiency risk the possibility of neural tube defects in the developing fetus.

The Neural Tube is a primordial structure that develops into the brain and the spinal cord. It is a flat structure that rolls up to form a tube and continues to grow to form the CNS; folate is essential in this stage, and lack of folate could lead to a closed or open defect in the neural tube. Birth defects such as spinal Bifida or anencephaly result when the baby is born.

Because this stage occurs very early in the first trimester, the mother’s diet before conception is a major determining factor early on.

Many foods contain folate naturally, including dark, leafy green vegetables, legumes (dry beans, lentils, and peas), and fresh fruits (oranges, bananas, melons, and most berries). This is usually not enough, especially for those looking to conceive; therefore, FDA.gov approved the inclusion of folate in raw materials used to produce staple foods like bread and pasta.

According to Johns Hopkins Medicine, women of childbearing age should take a folic acid supplement containing 400 (micrograms) mcg. This is in addition to consuming foods naturally high in folate and those fortified with folic acid to help minimize your risk. Women in this group should also speak to their healthcare provider to assess their nutritional needs, as some women may need more than the conventional 400 mcg.

The first and third trimesters are usually the most delicate, and a pregnant mom must carefully watch her intake and activities. It is also the period where the mother begins to notice significant changes in her body.

There are possibilities of weight gain due to enlarged breasts, hormonal changes, and the weight of the fetus. Cravings are relatively frequent due to hormonal changes. Anemia — reduced red blood cell count, may occur due to blood flow to the fetus. Constipation occurs as the growing baby compresses the mother’s intestines. Preeclampsia — high blood pressure during pregnancy is also common among many women.

The first trimester is crucial because it is the period of organogenesis where the primordial precursors of major organs begin to differentiate. A deficient diet could lead to long-term effects on the fetus, and exposure to teratogens may cause birth defects.

Diet Tips for the Third Trimester

In the third trimester, irritants and unhealthy food, drugs, or chemical exposure could trigger spontaneous or premature delivery and low birth weight. Therefore, a women’s diet in this period must be well-curated to ensure optimal health for both the mother and the fetus.

Veggies such as carrots, sweet potatoes, pumpkin, tomatoes, and red sweet peppers are important for vitamin A and potassium. Potassium can also be derived from Mangoes, prunes, bananas, avocados, apricots, and oranges. They are also good sources of carbohydrates, and fruits and leafy vegetables also provide Vitamin C.

Calcium, potassium, and vitamins A and D are primarily found in dairy products, including fat-free or low-fat yogurt, skim or 1% milk, and soymilk. Whole grains and cereals, both ready-to-eat and cooked, can supply iron and folic acid. Vitamin D regulates phosphate and calcium, which are essential in bone and teeth development. About 10 mcg of Vitamin D supplement should be taken daily when pregnant.

Protein sources include beans and peas, nuts and seeds, lean meat, salmon, trout, herring, sardines, and pollock. They provide omega-3 fatty acids, healthy fats that are essential for fetal brain and retina development. Red meat provides protein, zinc, and iron, however, it must be thoroughly cooked to avoid germs.

Some food groups are to be avoided in pregnancy; they include Unpasteurized milk and foods made from them and raw foods such as uncooked meat or sushi. These foods harbor bacteria, some of which can be teratogenic, crossing the placenta to affect the developing fetus leading to structural and functional defects. In addition, infection is generally not a good thing during pregnancy; it could worsen the immunocompromised state of the mother.

Alcohol should be avoided. It is capable of causing a range of manifestations referred to as Fetal alcohol spectrum disorders (FASD).

How Can Moms Ensure Nutritional Balance?

Much like expecting mothers are generally advised on what food they should consume during pregnancy, similar advice seems to apply if you are trying to conceive. If that is the case, you can ensure you have a solid nutritional balance by discussing your diet with your gynecologist or a nutritionist to ensure that you and the baby are both getting the right foods for a healthy pregnancy. Similarly, taking into account increased physical activity, which means you may need to consume more nutrient-dense foods, is important to keep in mind.

Prentice shared in a statement: “Our ultimate goal is to define an optimal diet for mothers-to-be that would prevent defects in the methylation process. Preconceptional folic acid is already used to prevent defects in embryos. Now our research is pointing towards the need for a cocktail of nutrients, which could come from the diet or supplements.”

Healthy food and a balanced diet are not only essential for your baby’s growth, but they could also be the cause of genetic or teratogenic modulation in your baby. Speaking with your nutritionist to evaluate your sources of calcium, potassium, folate, and other essential vitamins is essential. You should also schedule early prenatal visits with your healthcare provider.

Are you wondering how your pre-pregnancy and pregnancy diet might impact your baby? Researchers recently answered Is There a Link Between Processed Foods and Autism? You can also learn more about your body During Pregnancy.