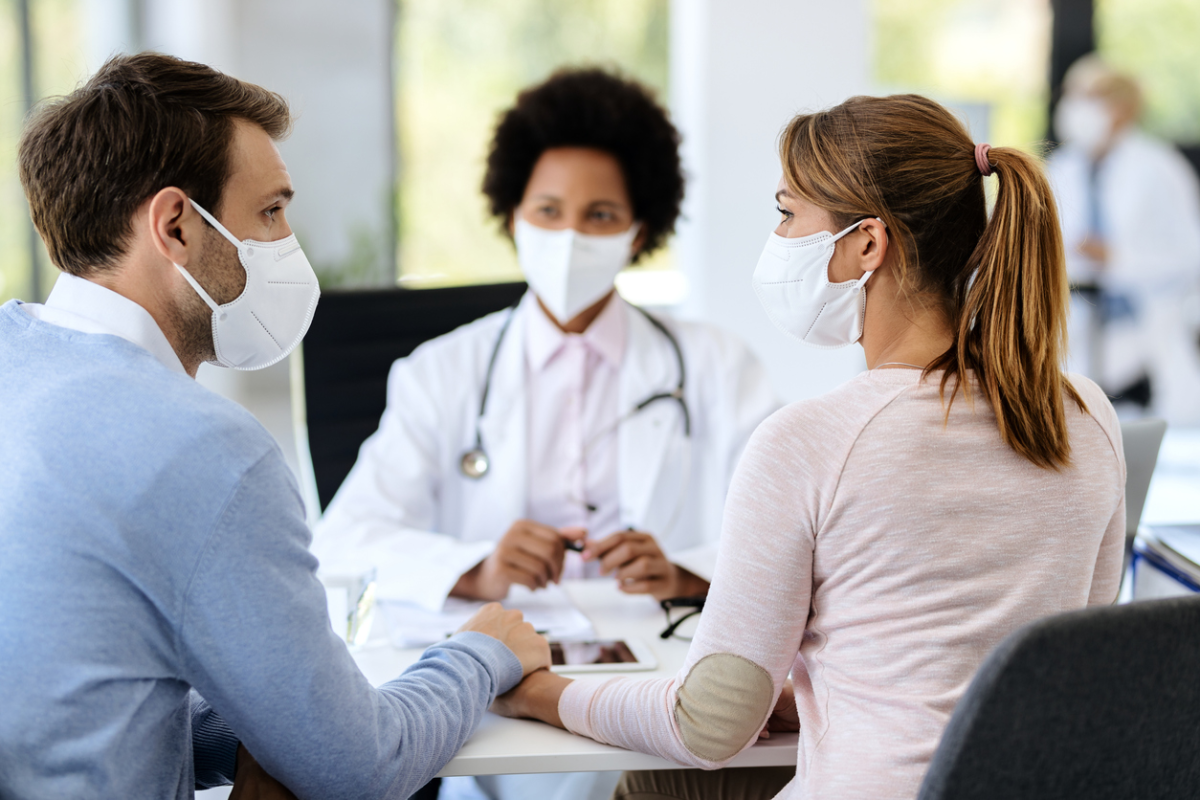 Find out everything you can expect from your pregnancy if you used assisted reproductive methods.
Heidi Butler
Table of contents

Having a child is an amazing gift - one that does not come easily or without challenges. The American Society for Reproductive Medicine (ASRM) notes that “infertility affects about 7.3 million women and their partners.” Infertility is defined as the inability to conceive after a year or more of having unprotected sex.

This leads many couples to turn to assisted reproductive techniques in order to increase their pregnancy outcomes. However, while this can allow for great success, it can also bring with it a slew of risk factors. We break down how a pregnancy achieved with the use of ART can differ from one reached naturally.

Assisted Reproductive Technology, otherwise known as ART, is the broad term that describes the various types of fertility treatments that are used to attain a healthy pregnancy. The most commonly known and most effective type of ART is in vitro fertilization (IVF). There is also zygote intrafallopian transfer and gamete intrafallopian transfer. Finally, intrauterine insemination (IUI) is a much less invasive procedure, but it is only recommended for certain infertility issues.

No matter which method you choose, women who find themselves successful in achieving pregnancy through ART methods will normally deliver about two weeks early, putting the gestation window at 38 weeks. Additionally, if the woman finds out she is pregnant with twins or triplets, this can further shorten the time frame.

IVF begins with ovulation induction. This involves stimulating the woman’s ovulation process through the use of oral medications and the regular injection of follicle-stimulating hormones like gonadotropin. These will help the oocytes (eggs) to mature properly and they can facilitate the development of more than one egg at a time. Women with irregular periods can greatly benefit from these ovarian stimulation treatments because it helps to better control the production and release of their eggs.

This is followed by the extraction of those eggs from the woman’s ovaries and retrieval of the partner’s sperm. Fertilization is then conducted in a controlled environment. This can be done by the simple mixing of the specimens or through intracytoplasmic sperm injection (ICSI). The latter involves directly injecting healthy sperm into a mature egg. This method of assisted conception is normally utilized when the subfertility issues stem with the man’s sperm count or quality.

Once fertilized, the eggs are given a few days to mature, reaching the blastocyst stage. This allows for the gynecologist to select the embryos with the highest likelihood of success. Finally, the embryo transfer is conducted. Once this is complete, the couple anxiously awaits a potential positive test result. A follow-up appointment will occur approximately two weeks after the transfer to find out if the procedure was successful.

Success rates are contingent on a variety of factors including maternal age, the quality of the gametes (sperm and egg cells), the timing of the implantation, and any chromosome abnormalities that may be present in the embryos. The specific fertility problems that you are experiencing as well as lifestyle factors like weight and smoking habits can also impact the viability of an IVF pregnancy. Pregnancy rates are normally highest with younger women (ages 24 to 34), in those who have had successful pregnancies in the past, and with couples who use higher quality donor eggs.

Interestingly enough, studies show that “transferring more and more embryos at one time does not increase the chance of live birth significantly.” Instead, it increases the likelihood of you having twin pregnancies or even triplets.

ZIFT is almost identical to IVF in terms of medications, egg retrieval, and the fertilization process. The difference lies in where the fertilized embryos are placed and how quickly the process takes to complete. In this case, your doctor will laparoscopically place the embryos into the fallopian tubes, instead of the uterus. Furthermore, this will occur within 24 hours of fertilization whereas IVF is done after a few days.

PubMed reports that this method can actually be more successful when ICSI is used. It also requires the transfer of less embryos, decreasing the risk of multiple births. Nonetheless, due to the fact that an elective surgical procedure is required to complete this ART, IVF is still considered the preferred method. Thus, ZIFT is normally only used when IVF fails.

This method of ART is very similar to ZIFT. The only difference is that after the sperm and eggs have been mixed, they are transferred directly into the fallopian tubes, prior to fertilization. This method is the least successful, but it is a viable option for couples who have religious or ethical issues (such as pre-implantation genetic diagnosis) with more traditional methods of ART.

While this is a modification of the normal way that pregnancy is achieved, it is the option that most closely mimics natural conception since fertilization occurs in the body and not in a petri dish. It is important to note that both GIFT and ZIFT cannot be used if the woman’s fallopian tubes have malformations or abnormalities.

As mentioned, IUI is a simple ART treatment that can be done at your obstetrician’s office. It is best suited for younger couples who are experiencing issues with low sperm count, ejaculation issues, or thick cervical mucus that impedes the effective travel of the sperm to the egg.

Your doctor will simply take your partner’s sperm and inject them directly into your uterus. This helps to lessen the distance that they have to travel, increasing your odds of pregnancy. Depending on your situation, your doctor may have you undergo an ovulation induction prior to insemination to increase your chances of success.

Just like with any other medical intervention, there are risks and rewards to every procedure. Obviously, a healthy pregnancy with no complications is the intent, but there are some issues that can arise following ART procedures.

Depending on your infertility issues and health status, your doctor may choose to implant as many as five embryos during each IVF treatment. This can be due to the woman’s age, the couple’s desire to get pregnant sooner rather than later, or the exorbitant cost of IVF (and therefore what the couple can afford). Unsuccessful previous attempts at IVF that have occurred in the past can also play a factor in this decision.

No matter what the reason may be, the implantation of more than one embryo can lead to a higher risk of twins or triplets. The American College of Obstetricians and Gynecologists (ACOG) reports that “in 2009, almost one half of ART infants (41.1%) were from multifetal pregnancies, compared with only 3.5% of infants among the general birth population.” This was directly correlated with the number of embryos that were implanted in the uterus.

Studies show that women can experience a higher risk of pregnancy complications when giving birth to multiple fetuses. These can include adverse obstetric outcomes like preterm birth, preeclampsia, low birth weight, and hypertension. However, the ACOG notes that a meta-analysis of singleton pregnancies achieved through IVF also brought a greater prevalence of these same issues compared to pregnancies that occurred naturally.

Additionally, the Centers for Disease Control and Prevention (CDC) states that whether or not assisted reproductive techniques are used, “twin babies are more likely to be stillborn, experience neonatal death, have birth defects of the brain, heart, face, limbs, muscles, or digestive system, and have autism than single babies.” Moreover, compared to singleton pregnancies, twins are “5 times as likely to be admitted to the NICU” and cesarean deliveries are normally required.

Research indicates that “ectopic pregnancy (EP) is the leading cause of maternal morbidity and mortality during the first trimester and the incidence increases dramatically with in vitro fertilization and embryo transfer.” EP is a condition where the fertilized egg implants outside of the uterus. Unfortunately, this type of pregnancy is not viable and if it is not caught early, it can be very dangerous for the mother.

Ovarian Hyperstimulation Syndrome (OHSS) is a condition that occurs when the woman has an exaggerated response to the injectable hormones used in infertility treatments. In mild cases, it causes the ovaries to swell and become painful, but symptoms normally subside within a week. However, some patients experience severe symptoms like blood clots, shortness of breath, nausea, and vomiting.

Placenta previa is a condition where the placenta attaches low in the uterus, covering part or all of the cervix. This brings the concern for severe bleeding during the pregnancy as well as in labor and delivery. Moreover, it can cause preterm labor and even impact the growth of your baby. Research shows that “there was a six-fold higher risk of placenta previa in singleton pregnancies conceived by assisted fertilization compared with naturally conceived pregnancies.”

Infertility is More Common Than You Think

The prevalence of infertility issues is increasing at a drastic rate in the USA. Nevertheless, this diagnosis does not mean that your dream of becoming a parent cannot become a reality. For those worried about the risks, gynecology experts have been working on ways to diminish the likelihood of women developing these problems while undergoing assisted reproductive technologies.

In fact, the Society for Assisted Reproductive Technology (SART) reports that more clinics are conducting single embryo transfers, IVF risks have been drastically decreasing since 2006, and the evolution of techniques have improved tremendously over the past 30 years. If you struggle with infertility, healthy ART pregnancies and giving birth to a thriving baby are both possible. Knowing the risks in the beginning of this process can allow you to be proactive about your care and better ensure optimal outcomes.