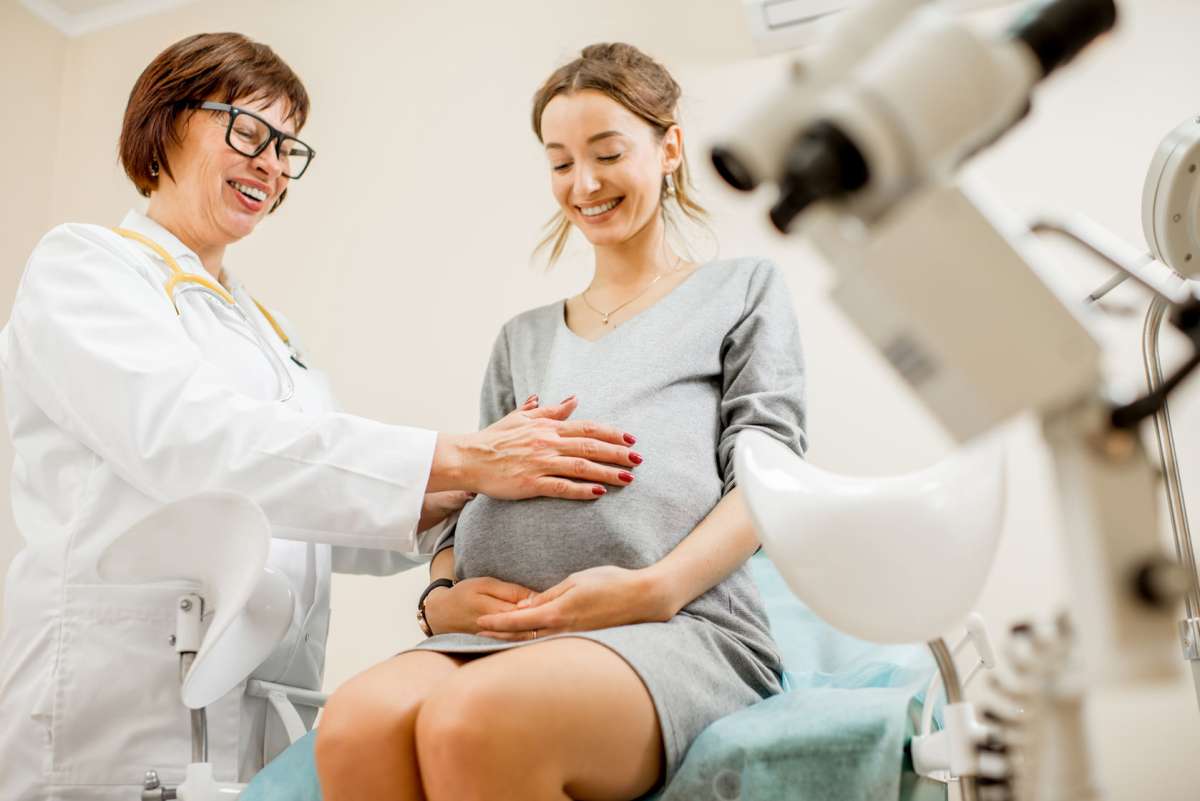 Routine Tests Performed During Pregnancy: We Break Them Down

There are a lot of tests performed during pregnancy. This article breaks down the tests your physician will perform during your pregnancy, including

You're having a baby! Congrats! Now that you're pregnant, you'll be seeing your OB-GYN a lot, and he'll be performing a whole bunch of tests.

It's important to understand what all these test are for, and what they tell you about your baby.

We consulted The Absolute Beginners Guide to Pregnancy to get some answers.

In your first visit, the physician will do a thorough gynecological exam. Your cervix will be checked, and a clinical pelvimetry exam performed, where the doctor uses his hands to get an estimate of the size of the pelvic bones to determine if your anatomy is adequate for delivering a baby vaginally.

Other areas to be checked will be the breasts, heart and lungs. The doctor probably won't recheck the cervix again until it is medically indicated, for example, if there is a concern for preterm labor or if a woman is actually in labor.

Here are some of the more common tests that will be performed on most women. Obviously, all the tests that are ordered are up to your physician, so if you don't get a specific test, don't panic. Your doctor may not think it is necessary for you to have that particular one.

One of the first tests that you'll receive is a CBC (complete blood count). This test checks your hematocrit and hemoglobin, as well as platelet count. Translation for laypeople like us: Hemoglobin and hematocrit measure your potential for anemia.

Why it's important (hematocrit and hemoglobin): Those women who are anemic need to be identified well ahead of delivery so that therapy can improve their low blood count. Physiologic anemia can be problematic to the patient.

Why it's important (platelet count):Because a woman will lose half a liter of blood on average at delivery. The platelet count measures the blood's ability to clot. With a low platelet count, a patient is at risk for bleeding to death.

A urine screen is primarily performed to check for urinary tract infections (no surprise there), more commonly known as UTIs. Occasionally, the urine screen may pick up other abnormalities of renal function, such as excess sugar or protein.

Pregnant women seem to be more prone to UTIs than they are normally. If the screening tests positive for an infection, often the doctor will order a culture to determine which organisms are responsible for the infection. That way the doctor can determine antibiotic sensitivity, finding out which antibiotic would be most effective against a specific organism.

Why it's important: Because UTIs can lead to kidney infections. If the infection is allowed to progress, this could lead to harmful effects on the pregnancy, as well as increase the risk for sepsis (a serious life-threatening infection involving the blood) in the mother.

Blood tests will check your blood type, your Rh status, and an antibody screen. Your blood type needs to be checked so that a potential mix-up of bloods can be averted if there is a need for a transfusion.

Rh-negative women need to be identified in advance so that they can be considered as candidates for RhoGAM, an immunoglobulin that is given at 28 weeks of pregnancy and within 72 hours of delivery in order for the mother to keep from becoming Rh sensitized. Occasionally, RhoGAM is also given when there is a potential risk for fetal blood to mix with the mother's blood, such as in a car accident or in amniocentesis.

Why it's important (RhoGAM): Giving this medication prevents the mother's body from mounting an antibody response against an Rh positive baby in future pregnancies. An antibody screen detects antibodies, both Rh and less common types, that may occur in the fetus or newborn.

Why it's important (antibody screen): Antibodies have the potential for causing blood disease in the fetus and newborn.

When a woman is pregnant, the only medicine she can take for syphilis is penicillin. If she weren't pregnant, she could be treated with other medications.

Why it's important:Overall, untreated syphilis can be transmitted to the fetus or embryo in at least 50 percent of all pregnancies, causing serious problems with the baby, not the least of which is death.

Due to the increased vaccination process of the past several years, rubella syndrome is now rare in the U.S.; however, approximately 10 percent of pregnant women may be susceptible to it (meaning they have no evidence of antibodies for it).

If a screen test shows that you are not immune to rubella (in other words that you can contract it), then the hospital will immunize you after your baby is born. You can't be immunized while you're pregnant because it's a live-borne virus, so the baby could be affected.

If you know you are susceptible to rubella, you should limit your exposure to high-risk sources, such as children who might contract it. Definitely stay far away from anyone you know who has an outbreak of the virus.

Why it's important:If a woman gets the infection while pregnant, she could transmit the virus to her baby. The virus could increase the baby's risk of congenital anomalies, preterm labor issues and severe medical complications.

Caution. Even if you had an MMR (measles, mumps, rubella) shot when you were a kid, it might not be effective anymore. Rubella is more commonly known as a type of measles.

Women who have hepatitis B or have been infected previously can transmit the disease to their infant during or after birth, so it's important to discuss in advance what the best way to deliver your baby should be.

Why it's important:Babies can become carriers and develop chronic hepatitis. Between 25 and 35 percent of those people infected eventually die from cirrhosis or liver cancer.

A pap smear will be done if you haven't had one already in the previous year. Doctors are looking for precancerous changes in the cervix. If necessary, they might perform a colposcopy and a cervix biopsy for further diagnosis.

Why it's important (gonorrhea):Gonorrhea can cause potential blindness in a newborn. It can also cause chorioamnionitis, which is an infection of the membrane surrounding the bag of water that surrounds the baby. After the bag of water is ruptured, there is a higher incidence of premature births and subsequent infant complications.

Why it's important (chlamydia): If a mother has chlamydia, half of all babies who pass through her birth canal will get the infection, which could cause conjunctivitis or chronic pneumonia.

It's been well established that there is a perinatal transmission risk of AIDS from mother to baby. In fact, the rate of passage to the baby is about 30 percent.

Women who test positive for AIDS on their initial screening will be given a more specialized test called a Western blot analysis. If that tests positive, then a diagnosis of HIV infection is made and there are medications that can be given to reduce the risk of transmission to the baby.

At this point, women are counseled as to how the infection can be spread and how transmission can be halted. In general, doctors frequently advise women who have AIDS not to get pregnant.

Sometimes, they will even advise them to terminate their pregnancy because the mother's life could be at stake due to her immune suppressed state (she is overly susceptible to infections), and the baby's life can be compromised as well.

There is a much higher risk for the mother to transmit the disease to the baby if her disease is severe or in an advanced stage of progression.

Interestingly, the HIV infection appears to have very little affect on the pregnancy, although the pregnancy itself can affect the degree of the HIV infection (making it worse) as it suppresses the immune system. There appears to be no advantage for having a C-section over a vaginal birth; however, many OBs are careful to avoid performing any procedures during labor that may increase the chances of fetal blood mixing with the mother's blood.

Why it's important: The baby may have the HIV infection, but not full-blown AIDS. AIDS is a deadly disease for the mother and baby.

Group B streptococcus is a bacterial strain present in approximately 20 to 25 percent of women. GBS poses no threat to the mother, but to a baby it can be lethal.

The GBS test is designed to screen for those mothers who may be carriers for this bacteria. Most OBs recommend doing a culture from the vaginal and rectal area at about 36 weeks of pregnancy.

If the test is positive, antibiotics are given at the time of labor to reduce any possible infection to the newborn. Antibiotics will also be given to women in preterm labor or if they have ruptured their bag of water for a prolonged period of time.

Why it's important:GBS infection is a common contributor to sepsis of the newborn, and it can carry a high mortality and morbidity rate for the baby, especially if the baby is born prematurely. However, sepsis of newborns occurs in less than 1 percent of all births, so it is considered rare.

Approximately 2 to 3 percent of women will develop gestational diabetes in their pregnancy (meaning that the pregnancy caused their diabetic condition). Generally, these are women who have no history or risk factor for diabetes. Because of this fact, a glucose screen is performed on most women in their third trimester between 26 and 28 weeks.

If you're having this test, you will drink a 50-gram oral glucose load (about a cup) and then have your blood sugar tested one hour later. There is no need to prepare for this test (such as fasting).

If the three-hour GTT is abnormal, then you will have a diagnosis of gestational diabetes, and it will be managed accordingly. Usually, the doctor will start with diet control, but you may need to be placed on medication or possibly insulin therapy.

Often, gestational diabetes will disappear after the baby is born; however, sometimes it uncovers the potential for developing diabetes later in life. So, if you're diagnosed with this condition during pregnancy, it's a good idea to keep tabs on it with your doctor in the future.

Why it's important: Toward the beginning of the third trimester, the mother's body undergoes a good deal of stress and her ability to balance her sugars is tested to a greater extent. The maintenance of sugar balance affects her metabolism and her blood pressure, but it's a two-pronged effect, affecting both the mother and the fetus.

This fetal growth increases the likelihood that the baby won't fit through the mother's birth canal, due to its larger size. In addition, shortly after birth, the baby who has been programmed to crank out extra insulin is still producing extra insulin after the cord is cut, but it no longer needs it. So the baby could become hypoglycemic as its blood sugar plummets. This condition could lead to metabolic problems in the baby, affecting its future growth and development.

Getting tested for these conditions is important for the health of both you and your baby. For more information on tests that focus on your baby, read Screening Tests During Pregnancy.