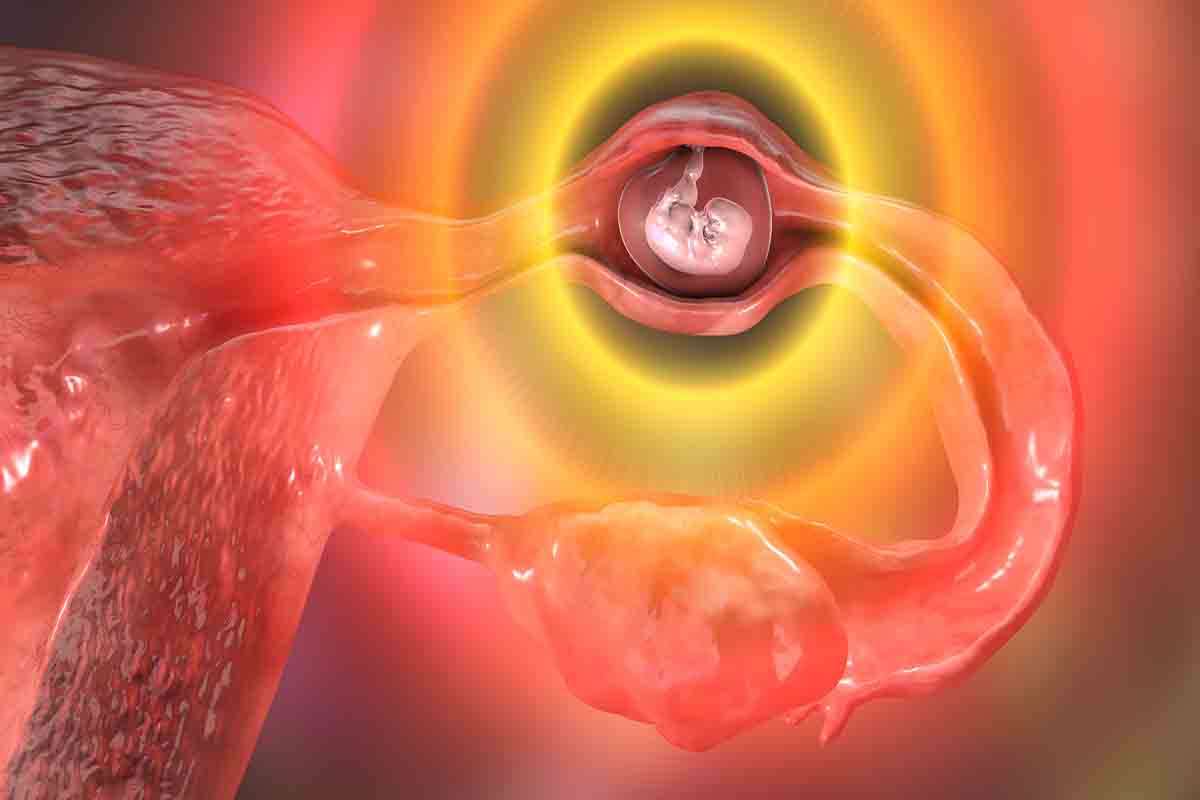 Understand the cause and risks of ectopic pregnancy and your options for recovery.
Heidi Butler
Table of contents

It is a terrifying moment when you find yourself in pain when you are pregnant. While rare, two percent of all pregnancies are ectopic, and when left untreated, they can be life-threatening. Thankfully, when addressed in a timely manner, you will not only recover, but you can also go on to have a healthy pregnancy in the future.

For those concerned that they may have a tubal ectopic pregnancy, we go over the signs and symptoms of this condition and what to expect if treatment is required.

What is an Ectopic Pregnancy?

According to The American College of Obstetricians and Gynecologists (ACOG), "An ectopic pregnancy occurs when a fertilized egg grows outside of the uterus. Almost all ectopic pregnancies—more than 90%—occur in a fallopian tube." Otherwise known as a tubal pregnancy, this occurrence is unfortunately unpreventable.

Symptoms normally occur between six to eight weeks following the first day of your last period. What this means is that you will still get a positive pregnancy test result and have a missed period just like everyone else. However, because the fertilized egg did not implant properly into your uterine wall, it is not actually a viable pregnancy.

The causes of extrauterine pregnancy can range from an infection, an inflammation of your fallopian tubes, structural abnormalities of the tube or the egg, to hormonal imbalances. Those with a history of sexually transmitted infections (specifically chlamydia) and pelvic inflammatory disease (PID) have a greater risk of having this type of pregnancy occur.

Research indicates that "in women, approximately 40% of the Chlamydia vaginitis [infections] affect the endometrium, which causes endometritis and tubal inflammation". Unfortunately, these conditions make it difficult for a fertilized egg to be effectively transported into the uterus. This leads to it attaching in other areas like the ovaries or Fallopian tubes.

Moreover, chlamydia is many times referred to as a "silent disease" because most people do not have any symptoms associated with it. This is why many women have no idea that they have contracted this STD, and as a result, they experience permanent damage from this bacterial infection. Regular testing is the best method for preventing irreversible damage from this type of infection.

Inflammation can also occur in those who are trying to practice safe sex. Women who use intrauterine devices (IUDs) as their form of birth control may have bacteria introduced into their reproductive system when the contraception device is inserted. Studies show that "the risk of ectopic pregnancy was 1.6 times higher for IUD users than for non-users". Moreover, in rare instances, extrauterine pregnancies can occur after a tubal ligation.

Additionally, those who undergo fertility treatments like in vitro fertilization (IVF) or have been diagnosed with endometriosis are also at a higher risk. Other factors that can increase your chances of having an ectopic pregnancy include age (women over 35), smoking, and having had a previous ectopic pregnancy. However, the ACOG goes on to note that "about one-half of all women who have an ectopic pregnancy do not have known risk factors."

What this means is that while some of these causes are preventable, most women who experience this loss are just a victim of bad luck. No matter what the issue may be, know that you are not alone and that most women go on to have successful future pregnancies following this devastating diagnosis.

Symptoms of An Ectopic Pregnancy

Since an ectopic pregnancy will appear similar to a viable pregnancy in the early weeks, it is important to pay attention to your symptoms and to speak with your health care professional when they arise. The biggest indicators that something is wrong are abdominal pain and vaginal bleeding.

However, unlike normal cramping that can occur in early pregnancy, this will be localized to one side of your lower abdomen. It can also manifest as lower back pain. It will start as mild discomfort but can develop into severe pain as time progresses. Moreover, the bleeding can start and stop sporadically. It will also be bright red and can become heavy like a regular period.

When shoulder pain and lightheadedness arise, it is likely that the condition has become more serious. When accompanied with low blood pressure, dizziness and fainting are a signal that a rupture has occurred. If you notice any of these symptoms, it is essential that you contact your physician immediately. If it is after hours, then head to the nearest emergency room to get evaluated.

Unfortunately, an ectopic pregnancy can go on for as many as 16 weeks and many of the signs can mimic normal pregnancy symptoms. While these aches and pains may seem minor at the moment, as the structure increases in size, they will become more pronounced. If you ignore these indicators and experience a rupture, doctors may be able to control the internal bleeding, but it is likely that they will not be able to repair these organs. For those hoping to conceive after this pregnancy loss, it will be much more difficult if this occurs.

Most importantly, in rare cases, if an extrauterine pregnancy is left untreated, it can have deadly consequences. This is why it is crucial that you address any concerns that you may have as soon as symptoms arise.

Recognizing Ectopic Pregnancy on an Ultrasound

In order to diagnose a tubal pregnancy, the doctor will conduct a transvaginal ultrasound. This entails inserting a wand-shaped device into the vagina to get a detailed look at the precise location of the structure housing the fetus. On a regular ultrasound, you should see a clear gestational sac within the uterus.

However, with an extrauterine pregnancy, this will not be the case. Instead, your doctor will identify an adnexal mass outside of the uterus, normally in a fallopian tube or in an ovary. This means that the pregnancy is ectopic and treatment will be required.

Other Signs Of An Ectopic Pregnancy

Another sign of an ectopic pregnancy is the level of your pregnancy hormones. During a normal pregnancy, the human chorionic gonadotropin or hCG levels will rise every few days. This is what gives you the positive test result. However, if you have an ectopic pregnancy, these levels will rise at a much slower rate and they will not reach the average thresholds. This is why blood tests are also used to detect this condition.

Depending on how far along you are in the pregnancy, treatment can vary from medications to emergency surgery. If symptoms are mild and a rupture has not occurred, a single injection of methotrexate is administered to prevent the cells from growing anymore. Then, over the next few weeks, the structure will be absorbed back into the body. Your doctor will monitor your hCG levels throughout this time until they disappear. Sometimes a second dose is necessary.

However, if symptoms progress too far, then surgery will be required. This procedure is normally done laparoscopically. That means a small incision will be made in your abdominal cavity and there will be minimal scarring. If you catch the tubal pregnancy in time, it is possible for doctors to salvage the fallopian tube, but sometimes it will need to be removed.

Conversely, if emergency surgery is required, the procedure can be more invasive. However, in either instance, once the surgery is complete, it will take up to six weeks to heal. No matter which treatment is used, expect to feel some pain and experience some bleeding after the procedure is complete.

Other symptoms can occur as well so always talk to your doctor about what to expect and what is cause for concern. Finally, following the injection or the surgery, you should abstain from sex until you are fully healed and your health care professional has given you the go-ahead. If your hCG levels are still present, it is best to wait.

It is important to note that no ectopic pregnancy will result in a healthy child. If you are worried that you may be experiencing this condition, remember that time is of the essence. This is considered a medical emergency. While no mother wants this diagnosis, it is imperative that you prioritize your health. Do not ignore troubling symptoms. Seek medical advice immediately.

Pregnancy loss is devastating. If you experience a tubal pregnancy, give yourself time to grieve and heal. Turn to your family and friends for support and know that there are resources available if you are struggling. Additionally, try to focus on your physical and mental health during this time.

Finally, know that you are not alone. This diagnosis does not mean that you cannot have a family in the future. In fact, research shows that 65.5% of women go on to have normal pregnancies within an average of five months following an ectopic pregnancy. Just make sure to follow up with your gynecologist about when it is safe to start trying to conceive again.