Here's helpful information on how to handle your children if they fight visitation with the noncustodial parent after divorce.
Table of contents

In some cases, children will refuse to stay with the noncustodial parent. Here are some reasons why this might happen:

If your children don't want to leave their primary home to be with their other parent, having a good heart-to-heart with your ex should be the first step. The problem may be easily resolved, such as paying more attention to the children, a change in discipline style or having more toys or other entertainment at the other home.

What's your scenario? If your children are resisting visitation, scrutinize the situation. Perhaps a simple change will turn things around for you, too.

Either or both parents may unknowingly be causing the children's refusal to go. Here are two checklists, one for the custodial parent and the other for the noncustodial parent, to gauge your "performance" as a divorced parent. Be honest. You're the only one looking at this.

The Anxiety of Transition for the Littlest Children

Refusal to leave the custodial parent is most common in very young children because they're too young to carry a mental image of the parent to whom they are most attached (usually their mother) and fear abandonment.

If you and your ex get along, and your children are very young, the cause of your children's refusal to leave their residential home is likely normal, age-related separation anxiety. A parent's recognition of that and willingness to work with the other parent to ease their children's anxiety will go a long way toward building trust and bonding.

Insensitivity, on the other hand, can result in continual resistance to leaving the primary residence and the eventual failure of the child-parent relationship.

When a Parent Is Maligned

If you think your ex has begun to wage a serious campaign against you with the kids (engaging in what's now called “Parental Alienation Syndrome” or PAS), you should suggest that your spouse and children see a mental health professional to aid their adjustment to visitation.

If your ex refuses to seek help, you might be justified in seeing your attorney to request that the court mandate a mental health intervention, and perhaps a change in physical custody or visitation, depending upon who's alienating whom. Complex situations such as this call for psychological—and perhaps, even legal—intervention for the entire family.

If your children lose their other parent, their self-esteem will take a nosedive, and they'll suffer feelings of abandonment—even if it now seems that they don't want to be with that parent.

If you have a good relationship with your children who are old enough to know better, they're generally not going to buy the hard line that you're awful if you're really not. As long as you're totally tuned in to your children, empathetic with their emotional needs and helping to build their self-esteem, you should be able address any attempt by your ex to alienate you from your kids. But, if you think your children are being “brainwashed,” discuss your suspicions calmly with them. You'll get a better feel for the true situation at their other home, and, hopefully, you'll be able to address any issues that arise.

Participating in open conflict—whether it's screaming at each other or making snide remarks—is the single most damaging thing you can do to your children. Although you have no control over your ex, you do have control over yourself. Don't get dragged into a fight. Stay cool.

Eventually, her father, who lost the custody battle, became less and less interested in fighting Rebecca's rejections of him. He and his girlfriend married and started a family of their own. As far as Rebecca was concerned, he found it easiest to just drift away. 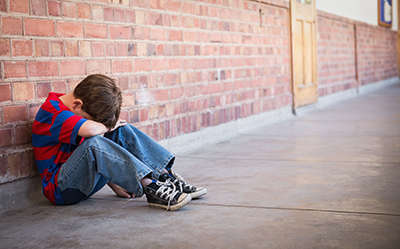 The Effects of Divorce on Boys

Divorce has particular effects on boys. Find out what they are.

What could Rebecca's father have done in this situation instead of giving up? For one thing, he might have let Rebecca know the door was always open for her. For instance, he might have continued to send regular postcards or letters, even if Rebecca didn't respond.

Maybe she would ask to see him again—in her own time. At the very least, she'd have concrete evidence to prove her dad still cared, despite her refusal to see him.

How do you handle this situation without drawing the child into the conflict more than he or she already is? According to psychologist Karen Breunig, co-author of Through the Eyes of a Child, “the best thing that I would advise is to appeal to the better graces of the offending parent. Explain how damaging this is for the child since the child identifies with both parents.” It might also be useful for the offending parent to seek therapy.