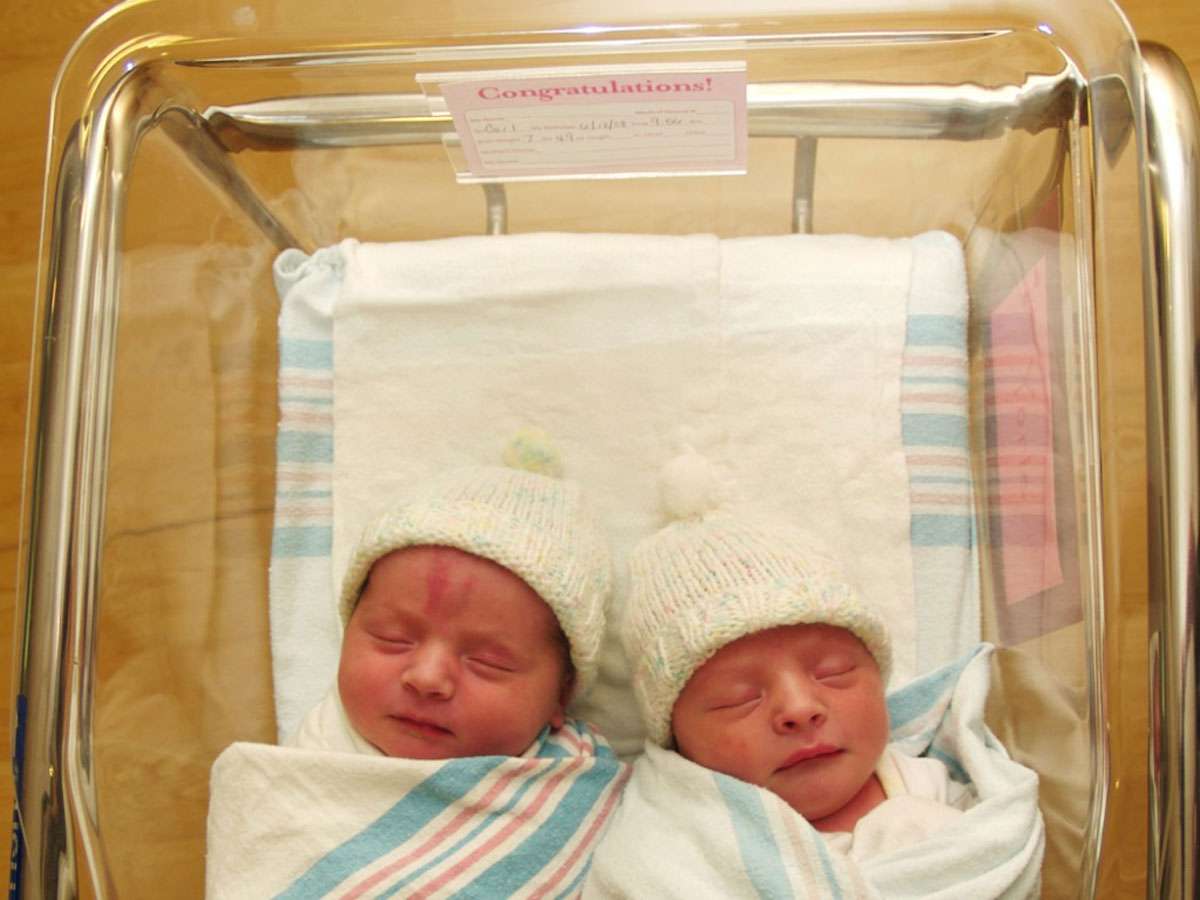 Do Twins Run in Families? A Genetic Explanation

Two OB-GYNs explain how common it is to birth twins and some interesting facts about twins in general.
Rachel Sokol

Have you ever wondered if twins really do run in families or not? Or ponder what your chances are of birthing twins? I have twin friends and twin cousins, and even though I do NOT have twin kids, I have always been fascinated by multiple births and birth orders. (Could be because as a ‘tween I loved reading “Sweet Valley High” books—who knows?) Two OB-GYN’s explain how common it is to birth twins—and what are some interesting facts about twins in general?

More: How Tall Will My Baby Be? A Genetic Explanation

Don't have time to read now, pin it for later:

Do twins really ‘run’ in families?

Yes...and no. “There is no evidence that identical twins run in families,” explains Dr. Mitchell S. Kramer,  Chairman, Department of Obstetrics and Gynecology, Huntington Hospital Northwell Health. “Non-identical, or fraternal, twins can run in families.” According to Dr. Kramer, fraternal twin genes—which transmit a higher chance of hyperovulation (releasing more than one egg per ovulation) are carried in the mother’s genes since only females ovulate. “These genes increase the chance of having fraternal twins.” Therefore, couples are more likely to have twins if there are twins in the woman’s family.

Do twins skip a generation?

Sorry, Dr. Kramer says this theory is just a myth. Let’s say your grandmother or grandfather is a twin but your biological parent (their biological child) is NOT a twin. This does not mean if you are pregnant you have a higher chance of conceiving twins naturally since they skipped a generation. “I believe the ‘twins skip a generation’ rumor started many decades ago before we had a better understanding of genetics,” explains Dr. Kramer.

Why is it that many women who undergo IVF end up with twins? Is that just a coincidence?

Nope, not quite a coincidence. “Most multiple pregnancies are conceived with fertility treatments,” says Dr. Kramer. “Then, most of these babies will be fraternal twins but the risk of identical twinning increases as well.”

And an FYI: IVF stands for ‘in-vitro fertilization and it involves fertilizing an egg with a sperm outside of a woman's body, allowing it to grow for a few days, and then implanting the embryo into the female’s uterus. “Sometimes, more than one embryo may be implanted, which is occasionally why you can have more twins,” summarizes Paniz Heidari, DO, a Northridge, California-based OB-GYN. Additionally, adds Heidari, hormones, and therapy administered to some women who are undergoing reproductive assistance can stimulate the ovaries to produce more than one egg that can then, subsequently, be fertilized. Note: With IVF, fertilization occurs in the lab, not in utero.  (IUI fertilization occurs in utero.)

What are the chances of conceiving twins naturally?

First, says Heidari, know there are different types of twins: dizygotic twins mean that two eggs are fertilized by two different sperm; the incidence of this in the  United States is 8 and 1000. “And this is known as fraternal twins,” says Heidari. “But identical twins are formed when a single fertilized ovum splits into 2 individuals were almost identically alike.  This is known as monozygotic twins.” Of course, you may conceive twins naturally, but over 50% of multiple gestations in the United States, explains Heidari,  are due to assisted reproductive technology.

Is it just me, or does just it seem like there are so many twins around lately?

Nope, it’s not just you! (Or me!) If you reside in the US, you aren’t seeing double—there are more twin births lately. Explains Dr. Kramer: “The US has seen an increase of twin births. Aside from those undergoing IVF, this is likely due to the increase in the age of women getting pregnant.” Increasing age, adds Kramer, causes physiologic changes that increase the rate of twinning."

Since the 1980s, twin births rose by a third worldwide -- from 9 to 12 per 1,000 deliveries. About 1.6 million twins are born each year and one in every 42 babies is a twin. The chances of having twins increase with age, according to 2021 in the journal Human Reproduction.

I’m pregnant with twins. What should I know?

Well...besides the fact that you'll be getting very little sleep (sorry…) Heidari says that “while twins can be very joyous, there can be risk factors for both the mom and the baby with higher-order multiples.” She explains that the rate of triplet and higher-order multifetal gestations increased more than 400% during the 1980s and 1990s, peaking at 193.5 per 100,000 births in 1998, followed by a modest decrease to 153.4 per 100,000 breaths x 2009. That sounds overwhelming, but Heidari breaks down all the math. “The increased incidence of multifetal gestation has been attributed to two main factors: One, a shift toward an older maternal age at conception when multifetal gestation is more likely to occur naturally and two,  an increased use of assisted reproductive technology which is more likely to result in multifetal gestation,” says Heidari.

Wondering if you're having twins? This article from John Hopkins Medicine has the answers to some very practical questions for parents who are expecting twins.