Jacqueline Weiss
Could you be secretly regal? There are many surnames that have been associated with royal families throughout history, and one of them could be yours!
Table of contents

While the British royal family doesn’t technically have a last name, there are several surnames throughout history that have been tied to royal families. If you have one of these last names hiding in your family tree, you might have royal blood.

More: The Meaning Behind The Royal Baby’s Name

Don't have time to read it now? Pin for later: 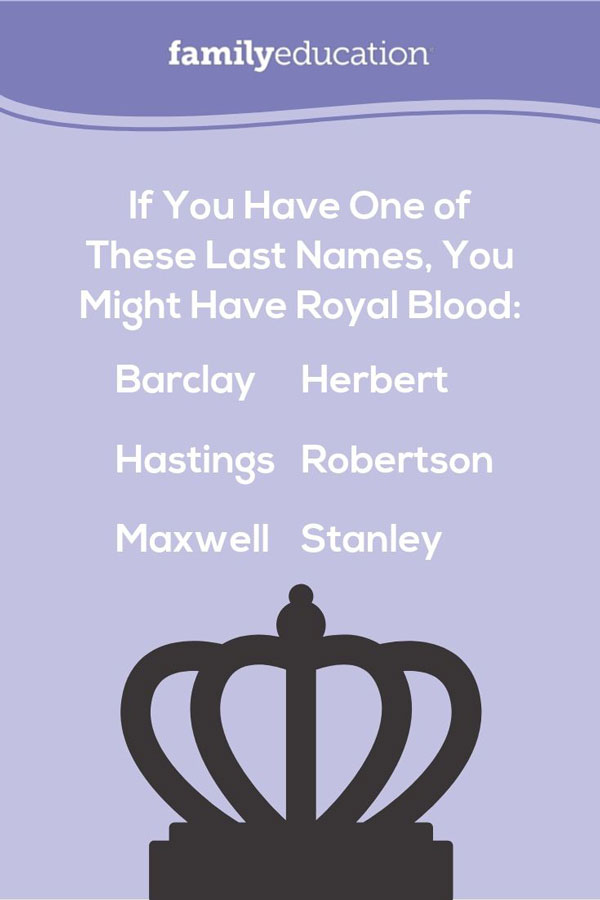 Barclay, which translates from Old English to birch meadow, was brought to Scotland from the parish of Berkeley in Gloucestershire county, located in southwest England in the 12th century; Walter de Berchelai or Berkelai was Chamberlain of Scotland in 1165.

This habitational name from Hastings, a place in Sussex, on the south coast of England, near where the English army was defeated by the Normans in 1066. It is named from Old English Hǣstingas ‘people of Hǣsta’. The surname was taken to Scotland under William the Lion in the latter part of the 12th century. It also assimilated some instances of the native Scottish surname Harestane.

Because of its association with the Earl of Huntingdon, the title was associated with the ruling house of Scotland and was also linked with Robin Hood in English folklore.

Meaning the protector of the home, the house of Howard began with the leading family of the English Roman Catholic nobility, and was founded by Sir William Howard or Haward of Norfolk (d. 1308). The family acquired the dukedom of Norfolk by marriage. The first duke of Norfolk of the Howard line was created earl marshal of England by Richard III in 1483, and this office has been held by his succeeding male heirs to the present day.

First recorded in 1144 in the form of Mackeswell (Mack’s spring or stream), this is one of the last names that could link to English aristocracy. Thanks to its association with the Baron of Ros, which has long been considered the oldest barony, and had precedence over other English titles, this habitational name hails from a place near Melrose in Roxburghshire in the Southern Uplands of Scotland.

Much like Harrison, which could be translated loosely to ‘son of Harry,’ Robertson can loosely translate to ‘son of Robert.’ Derived from the first name Robert, this surname is very common in Scotland, as it is also the name of three late kings of Scotland. With no less than 25 different coats of arms, this is one of the most distinguished surnames around.

While the meaning of Stanley is ‘from the rocky meadow’ in Old English, this habitational name hails from a variety of places including  Derbyshire, County Durham, Gloucestershire, Staffordshire, Wiltshire, and West Yorkshire. Stanley is one of the oldest and most noble English surnames, with the Stanley family holding the earldom of Derby, dating back to 1139.

This name is also the Americanized form of various similar-sounding names in European languages, including Stanislawski in Polish and Anastasiou in Greek.

In English, this means ‘exalted ruler’ and in German, ‘shining army,’ so it’s no surprise that Herbert has aristocratic ties. From the German first name, this surname was taken to Ireland after the Anglo-Norman invasion in the 16th century, though it originated long before that. Composed of the Germanic elements heri, hari ‘army’ + berht ‘bright or famous,’ this name is one of the most regal.

Do you recognize any of these surnames from creating your family tree or researching your ancestry? You just may have royal roots you didn’t know about!