Sa'iyda Shabazz
It’s important to note that while they may look similar, temper tantrums and sensory meltdowns are fundamentally different.Dr. Fran Walfish, Beverly Hills family and relationship psychotherapist, breaks down the key differences.

As parents, we can usually recognize when our kid is throwing a temper tantrum. Something, usually hearing the word “no,” will trigger them. And suddenly they turn into a red-faced, wild-eyed banshee. And there is something else that could have them acting similarly, a sensory meltdown. Meltdowns usually come from a less direct source. But how do you tell the difference? There are a few key indicators.

“It is very difficult for parents and many professionals to differentiate between a sensory meltdown and a temper tantrum,” says Dr. Fran Walfish, Beverly Hills family and relationship psychotherapist, author, The Self-Aware Parent, regular expert child psychologist on The Doctors, CBS TV, and co-star on Sex Box, WE TV.

More: An Age-by-Age Guide to Setting Discipline Consequences for Kids

It’s important to note that while they may look similar, temper tantrums and sensory meltdowns are fundamentally different. A temper tantrum tends to be related to a want or need. If your kid feels they need an extra five minutes to play, but it’s time for a bath, they’re likely to throw a tantrum to try and get their way. A sensory meltdown is often a reaction to a situation. If you’re in a crowded store and your kid just falls apart seemingly out of nowhere, it’s likely a sensory meltdown.

There are three main ways to tell the difference between a temper tantrum and a sensory meltdown, according to Dr. Walfish.

Don't have time to read now? Save for later: 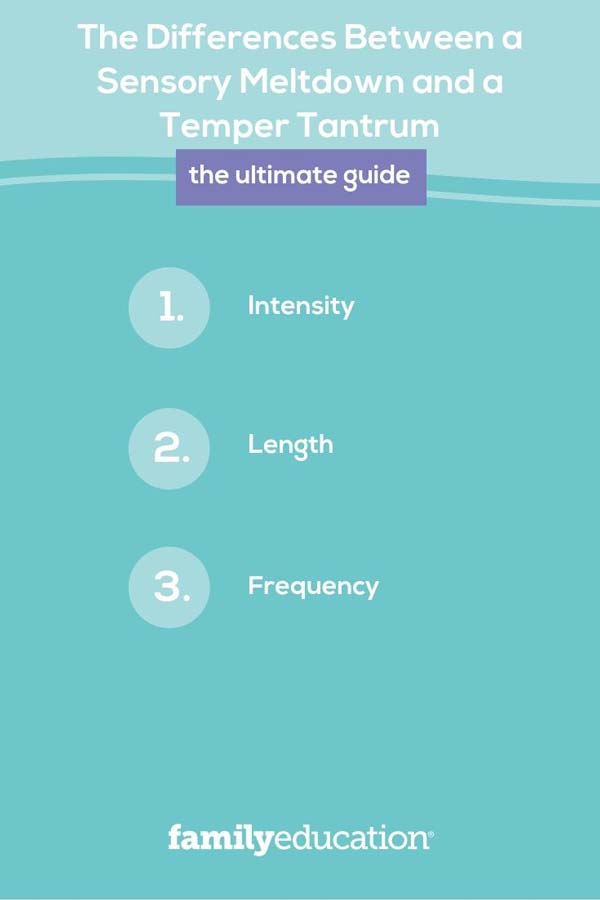 How to Tell the Difference Between a Sensory Meltdown vs. Temper Tantrum

No doubt that tantrums can be intense, but kids usually have a level of awareness during a tantrum. A tantrum may include screaming, stomping, or hitting (but hopefully not!) to try and get whatever they want. Similarly, meltdowns may have the same, but they will start at 100 and continue to escalate.

Length of meltdown before child calms down

A kid throwing a temper tantrum may stop relatively quickly if they realize it isn’t getting them what they want. If you ignore them and it peters out, then you’re likely dealing with a tantrum. Meltdowns will likely make it harder to calm the kiddo down. You may need to take them away from the thing causing overstimulation (ie, taking them out of a store) to begin to calm them.

Frequency — whether the tantrums persist for an extended period of time

Tantrums, especially with young kids, are common. They’re using them as a way to test boundaries. Chances are if they don’t get their way four times, at least two of those times will result in a tantrum. Meltdowns aren’t quite as frequent.

Whether it’s a tantrum or a meltdown, having a plan to handle it is key for parents. Acknowledging their feelings is the most important, no matter what. Following up will vary, depending on the situation. With tantrums, you always want to be firm in your denial. This way, they will eventually learn that throwing a tantrum isn’t an effective way of getting what they want.

Meltdowns often require gentler care. Because kids have no control over a meltdown, you have to meet them where they are. If that’s simply having them take deep breaths until they calm down, or holding them to provide them with a safe space, you have to feel it out in the moment.

1.    Be genuinely empathetic to your toddler's struggle.

2.    Narration. Learn to talk reflectively with empathy in the moment of a conflict. You might say,  "Johnny (use his first name since pronouns are not mastered until age four) wanted more video and Mommy said it's bath time. Johnny got mad. It's hard to stop when you want more."

3.    Physically walk your screaming child to his next destination ie: to the bath to help him settle and calm down there. Children will escalate their yelling and protest thinking you might change your no to a yes. If you’re away from the place of desired object your child will calm down faster.

4.    If your child is out of control or has been aggressive (hitting, biting, scratching, or pinching), hold your child in your lap facing away from you to help calm your child. The holding provides a safe container so you can act as a receptacle for your child's rage. Your child learns that she can be super angry and your do not attack, criticize, blame, or collapse as the target for their rage. Tell your child when she stops pulling on you, you will let go. The moment her muscles relax, release her and praise her learning to settle herself. You will not have to hold her too many times before you see a decrease in the frequency and intensity of her oppositional tantrums.

5.     Do not lecture your child. Kids hate to be told what to do. Rather, after a tantrum talk gently with your child about what he wanted and was feeling. Together come up with alternative ways he can get what he wants without a meltdown. Always accept your child where he is. We are all on a learning curve. No one is perfect. We all want the same thing—to be acknowledged, validated, and accepted—flaws and all!

Looking to stop tantrums once and for all? Here are 6 Strategies to Help Prevent Tantrums and Meltdowns.