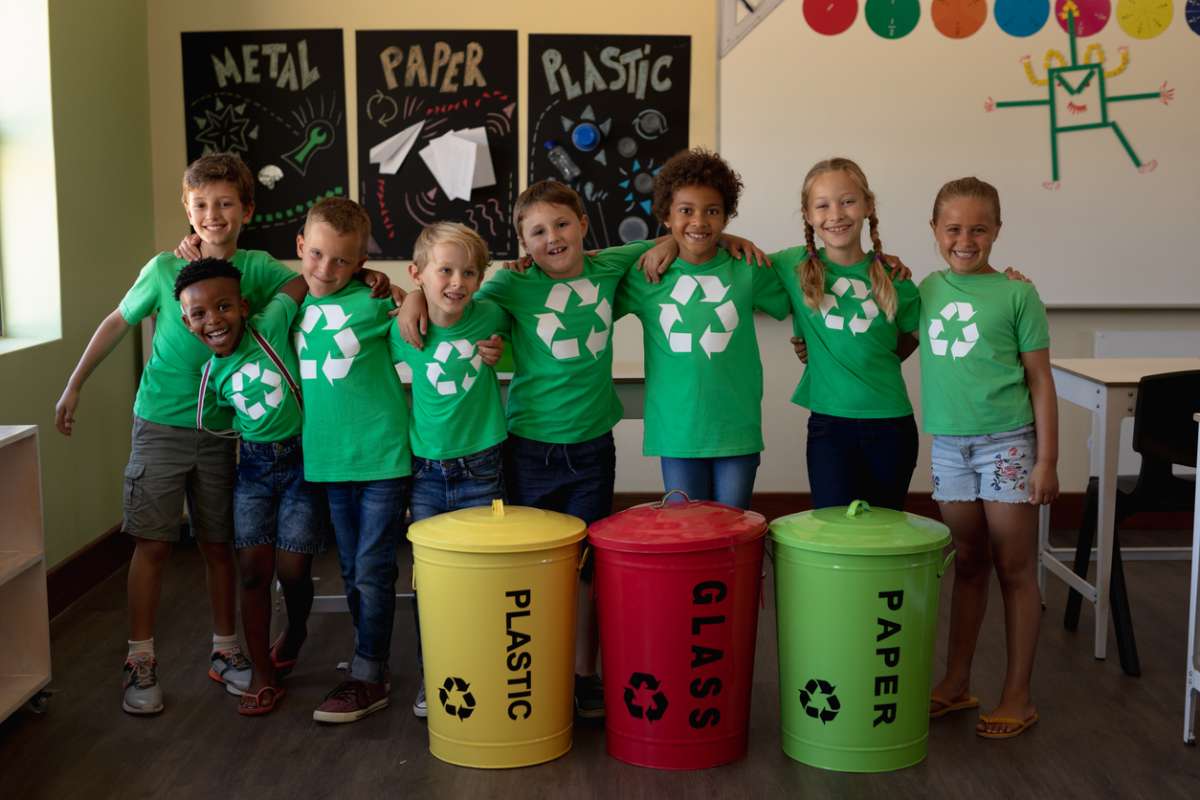 It’s never too early to start teaching your kids about climate change – and climate change art is a great place to start.
Jess Faraday
Table of contents

It’s never too early to start teaching your kids about climate change. After all, the toddlers of today are the climate activists of tomorrow. More importantly, they’ll be the ones dealing with the results of our current activities and policies.

But climate change is an abstract concept for anyone to grasp. What’s the best way to help your little environmentalist to get their head around it?

Art can deliver powerful messages simply. And, as it turns out, small children can be quite insightful when it comes to the meanings behind works of art. In this way, art and climate change activism can go hand in hand.

There are numerous works of art by contemporary artists that reflect on the effects of the climate crisis on humanity and the natural environment. So pack your snacks and hit your favorite museum. Or better yet, get ready for an online tour.

Before we move on to some of the signal works of climate change art, let’s talk a bit about good ways to approach the subject with our kids.

The idea of the climate crisis catastrophe can be terrifying for anyone. The last thing anyone wants to do is give their children fuel for nightmares or anxiety. So choose your art carefully, keeping your child’s age and personality in mind.

The art that we’ve chosen for this article illustrates different aspects of climate change. However, we’ve endeavored to choose art that does so in an accessible, family-friendly way. Many of the pieces we’ve chosen also focus on solutions and ways that people can help.

If you’re wondering whether something is appropriate for your child’s age, ask yourself the following questions:

First, would they understand what is being presented? Could you easily make it understandable to them?

Second, is there anything in the piece that your child might find upsetting?

Always Look for the Helpers

Mr. Rogers famously said to look for the helpers.

It’s easy to become frightened or despondent in the face of a crisis. But a lot of people find comfort in knowing that people are out there working to solve the problem, and even more people find hope and agency in being part of the solution themselves.

Here are some of the most impactful pieces of contemporary art that can help your little ones to grasp the ideas of climate change, ecology, sustainability, and more.

In 2015, Danish-Icelandic artist Olafur Eliasson brought twelve enormous blocks of Arctic ice from Greenland to the United Nations COP-21 climate change conference in Paris. He arranged the blocks of ice in the shape of a clock to demonstrate our race against time in the climate crisis. This large-scale installation was called Ice Watch Paris.

Eliasson installed more Arctic ice at the Tate Modern and around London in 2018. In addition, he spent twenty years photographing a series of shrinking Icelandic glaciers, which you can see at the exhibit’s official website.

You can also listen to an interview with Eliasson and see his most recent work in the video below:

The Crochet Coral Reef is a beautiful, ever-evolving installation that demonstrates the effects of global warming and pollution on our precious coral reefs.

Hundreds of hours and millions of stitches done by hand also make a statement about labor, particularly female labor. It also reflects on how handicrafts like knitting and crochet, which many today pursue as hobbies, used to be essential skills.

This ever-growing work of art consists of two pieces: a traveling exhibit and local reefs around the world, created by locally based crafters.

Read more about the Crochet Coral Reef from the artist’s statement, take a look at some of the pieces here, or, if you’re lucky enough to have a local reef, go and visit it! You can also watch Margaret Wertheim’s TED talk below:

In Eve Mosher’s ongoing High Water Line project, the artist walks around cities using a sports field chalk like a marker to show where the water line could end up if human activity causes the predicted rise in sea level.

Mosher first undertook this project in 2007 in Manhattan and Brooklyn, New York. Since then, the High Water Line project has taken on other cities, including Philadelphia, Bristol, Stockholm, and others.

You can see this and Mosher’s other projects on her website. You can also learn more about High Water Line in the video below:

A global temperature rise of two degrees Celsius doesn’t sound like a lot. But globally, it is. ‘Movement’, a permanent sculpture installation by Tomás Saraceno, seeks to illustrate what those two degrees actually mean.

It also imagines a world where moving from place to place doesn’t involve fossil fuels. Rather than moving in a designated way or direction, the sculpture moves in harmony with the wind and ambient temperature.

Watch ‘Movement’ in the video below, along with an explanation by the artist:

In 2015, University of Georgia marine scientist Joan Sheldon knitted a scarf that used different colors of yarn to illustrate the global average temperature from 1600 to the present. She used blue to represent cooler temperatures, red for warmer ones, and purple for neutral temperatures.

She presented the scarf at a conference and was amazed by the reaction. Everyone wanted to touch it — even the climate scientists!

Since then, Sheldon’s simple project has become a movement. You can learn more about it at the Tempestry Project’s website, and even order your own climate scarf kit, complete with NOAA data. It makes the perfect climate change activity.

Miami artist and professor Xavier Cortada made waves, so to speak, with his project Underwater Homeowners Association. One doesn’t normally associate melting glaciers with Florida, but Florida is one of the areas set to suffer the most from rising sea levels.

The Underwater Homeowner’s Association encouraged homeowners to install lawn signs showing how much sea rise it would take for their homes to be underwater.

Cortada’s work is participatory and action-oriented. It’s also something that individuals can and do build on in their own communities.

See more of Cortada’s work at his website, and listen to an interview in the video below:

Jill Pelto’s art combines scientific data (maps, graphs, and so forth) with vivid watercolors to make statements about climate change, rising sea levels, and renewable energy. Pelto has a Master of Science degree and has conducted research on glaciers and the ice sheet in Antarctica.

Her beautiful watercolors depict people and animals along with visual interpretations of climate data. You can see her work on her website.

Climate change art draws attention to environmental issues and problems, but it can also point toward solutions. Artworks for Change contains portfolios of climate change art from a variety of artists.

Check out Verne Dawson’s drawings and paintings, which call for us to reconnect with the natural world.

Laura Ball’s watercolors are a celebration of humanity’s place in, and connection to, the world around us.

The work of photographer and biologist Antonio Briceno shows a different way of relating to the environment and nature in his portraits of indigenous people.

Architect Mitchell Joachim creates striking visions of future cities and suburbs where humanity lives sustainably and in harmony with the environment.

Do you have questions about climate change art? We have answers!

How Are Paintings Evidence of Climate Change?

Before photography, painters were commissioned to travel to different parts of the world to paint what they saw for the people back home. But even paintings that were created for other purposes — think landscapes — can show us the world as it once was.

You can learn more about the history of travel through the Northwest Passage in the video below:

Absolutely. Nothing can speak more clearly and powerfully than art. This makes it an excellent teaching tool for people of all ages.

What Is the Future of Climate Change Art?

Climate change art is as dynamic and fast-moving as climate change itself. The only limit is the imagination of the artists themselves!

Why Are Some People Uncomfortable with Climate Change Art?

There’s a reason we call some facts “uncomfortable truths.” The climate crisis is a crisis. It’s affecting us right now, and, if scientific models are correct, the problems caused by our changing climate are only going to become worse.

That scares us, and it should.

But a lot of things are scary. As parents, part of our job is to help our children work through things that they find frightening. It’s all right to admit that we don’t have all of the answers and that we’re frightened, too.

Rather than turning away from ideas that make us uncomfortable, we can use that discomfort to spur us to take action when and where we can.

Earth Day is Every Day

Every day is a new opportunity to educate ourselves and our children about our magnificent planet, and how our actions, large and small, can impact it. Every day is a new chance to become part of the solution.

Thank you for your feedback.
About the author
Jess Faraday