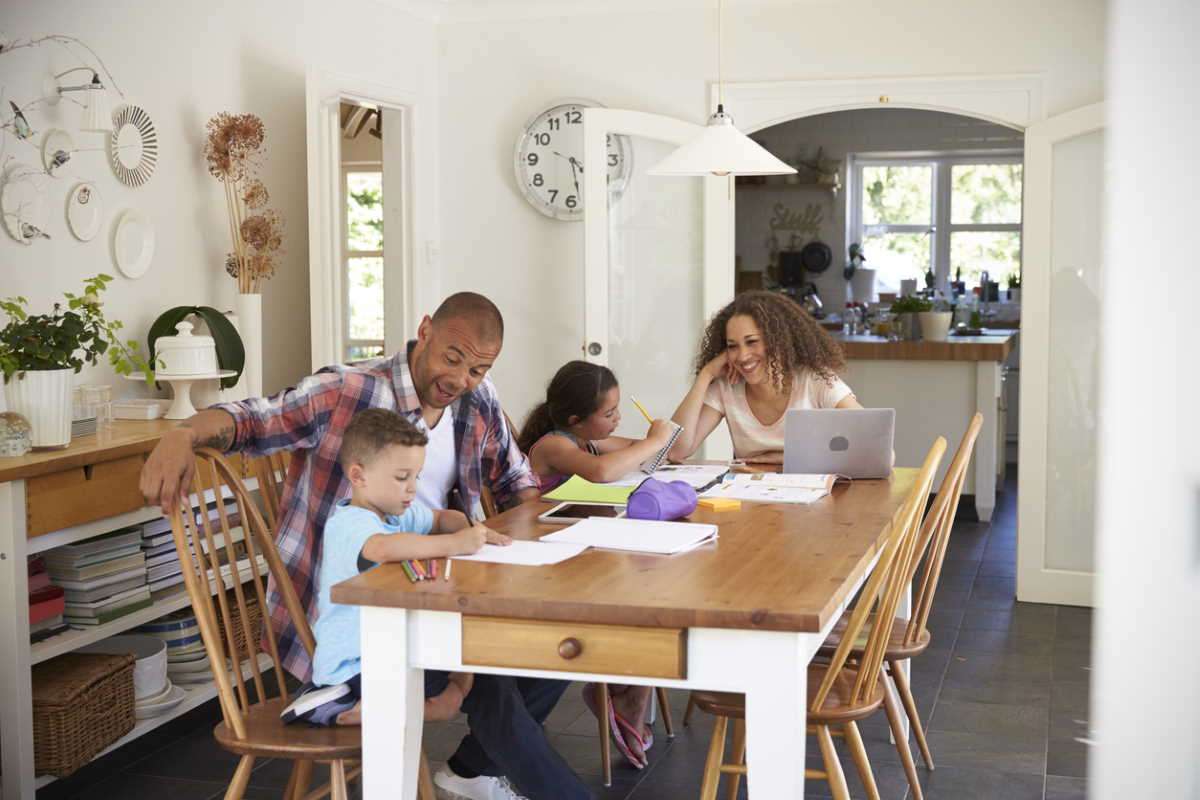 A Study on School Subjects and Parental Involvement

A new survey by Word Tips reveals which subjects parents value when it comes to their children's education, how involved parents are with homework, and how tech is changing the landscape of education.
by: Kayla Brennan

We all want our children to perform well in school, but with COVID-19 closing schools across the country, many parents have become the teachers. Still, in a typical scenario, what role should parents play in their children’s education? Which subjects do parents think their child should learn?

In a new study, Word Tips surveyed more than 1,000 Americans about which subjects are most relevant and which specific topics they feel are essential for their children to know. The study even went a step further and asked the 703 parents within this group about their strategies for supporting their kids’ academic success and their hopes for their children’s educational futures. Here are some of the results of this study.

Some subjects taught in school are prevalent in our everyday lives - others, not so much. But which courses did respondents feel are most important? According to the study, one in three people think English is the most important subject for children to learn, closely followed by math (25.2%) and business (10.3%).

Although some schools have cut art programs to save money, nearly one in ten respondents feel it’s an important class. Alternatively, foreign language (0.6%), physics (0.7%), and physical education (0.8%) were ranked the least important subjects among those surveyed.

Parents were almost twice as likely as teachers to think business classes should be taught in school. But teachers were more inclined to think the arts were vital school subjects. 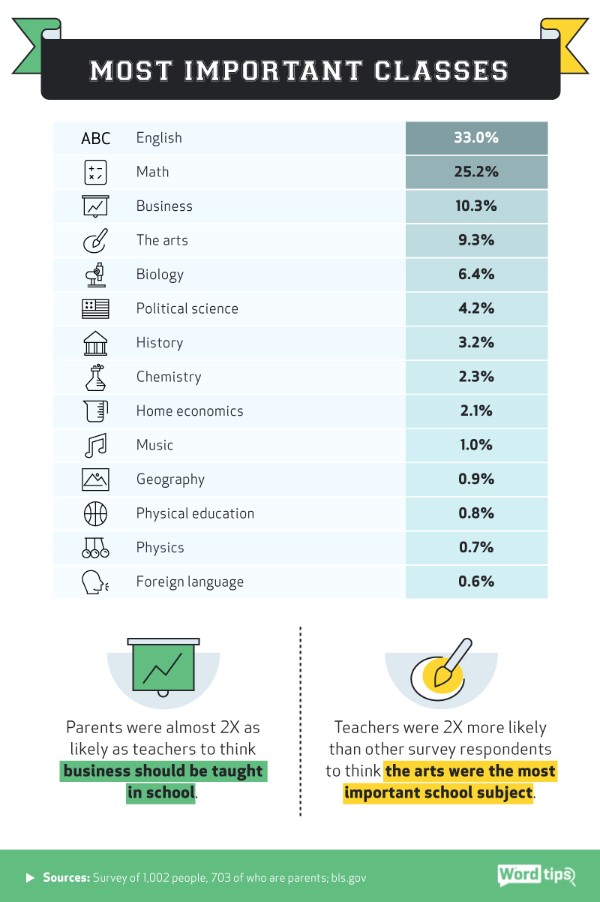 Sometimes teaching controversial topics has to be done. We cannot learn from mistakes if we do not know what they are. Nearly nine in ten people felt schools should add personal finance classes to the curriculum. Approximately three in four respondents want privacy rights taught in school. While schools generally cover sex education, it ranked third in the information parents felt students should know (70.9%).

The study also asked if people thought themes such as climate change, drugs, politics, and vaccinations should be standard to the curriculum, and more than half of respondents said yes. As for classes they feel should be removed, nearly half (44.7%) of those surveyed said religion classes were not needed. Respondents also felt that topics such as animal rights (19.9%), evolution (18.6%), and terrorism (28.3%) are not necessary. 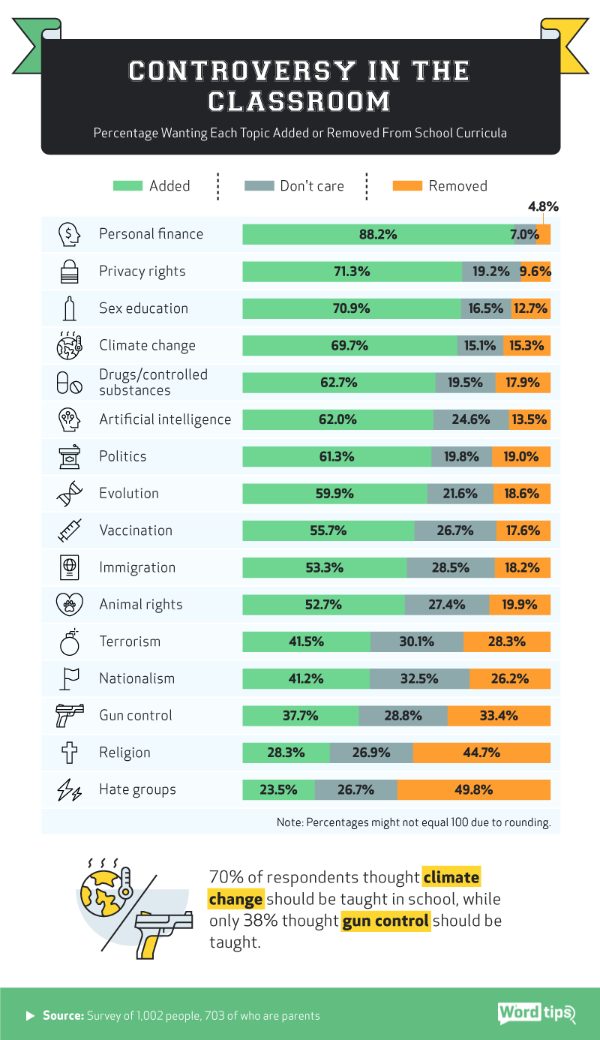 With teaching methods continually evolving, parents might not be able to help as efficiently with homework as they would like to. Math (71.8%) was the subject students needed help with the most, followed by English (61.6%) and history (37.1%).

Fewer than one in five parents helped with science classes such as biology (20.5%), chemistry (16.1%), and physics (8%). Physical education (7.5%) and home economics (7.7%) were the classes in which students were least likely to solicit help.

The study revealed that more than half (51.5%) of the parents surveyed help their children with homework at least two times per week, compared to just 4.6% who never give assistance with schoolwork. More than three in five parents admitted to never doing their child’s homework, but 12.7% revealed they did their kid’s homework at least twice a week.

Parents who help their children daily with homework tended to argue less than those who did not. Approximately 5% of parents assist daily and fight over completing homework, but about one in four parents who only helped twice a week or fewer argue about completing assignments.

While nearly one in two parents sometimes had difficulty answering homework questions related to specific school subjects, one in three parents said school technology makes it challenging to help their children with homework. Approximately 20% of parents paid for tutoring within the last month, spending an average of $152 monthly. 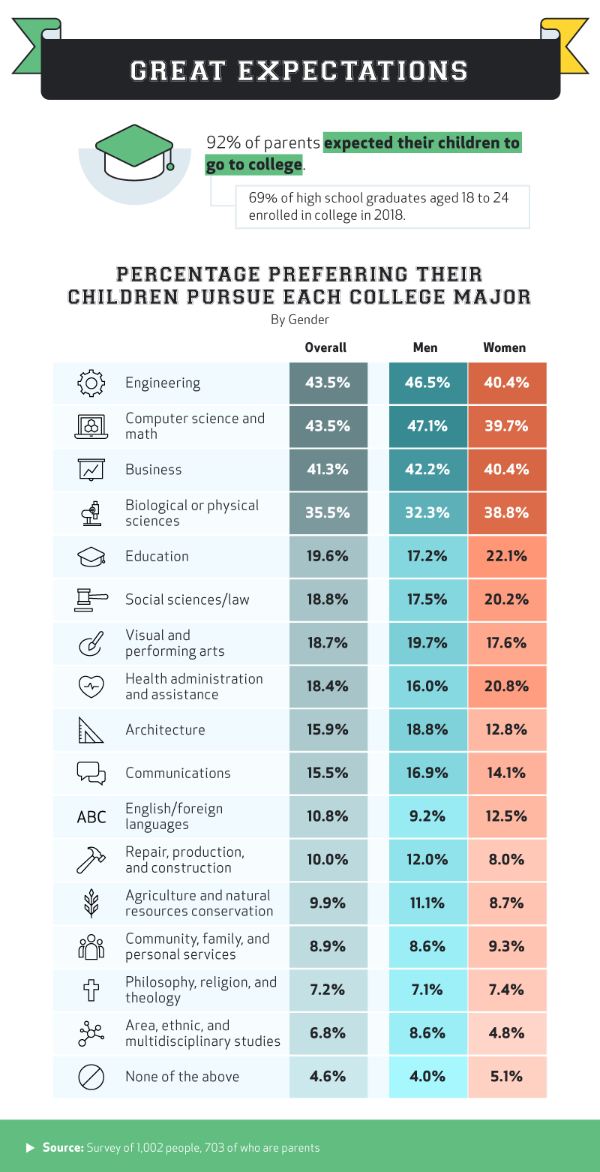 While the findings of this survey are helpful and interesting for both parents and educators, it’s important to do and advocate for what works best for you and your family when it comes to your child’s education.

Looking for ways to keep the kids busy and learning during social distancing? Sign up for the Prepared Parent, a daily newsletter filled with everything to help mom and dad in their roles as teacher-parents.