What Color Hair Will My Baby Have? A Genetic Explanation

Elisa Cinelli
Can you predict what color your baby’s hair will be? You can definitely make an educated guess. This genetic explanation will teach you how hair color is determined and can be predicted.

What will your baby look like? Hair color and eye color are the most common things expecting parents wonder about. While there is no sure bet, you can make some good guesses with the right information.

More: Will My Baby Have Freckles?

To understand how hair color works, you will need to understand some basic genetics. During my time studying genetics at the University of California, Santa Cruz and teaching genetics in the San Francisco Unified School District, I have learned a great deal about genetic compositions and make-up can have an impact. Your genetic code consists of tens of thousands of directions that tell your body how to grow, called genes. Genes are stored inside chromosomes and determine everything from your blood type to your biological sex to your hair color.

For every gene, you have two alleles. One came from your mother and one from your father. Both alleles are stored in your chromosomes, but if they are different, only one shows up in your appearance.

The gene code that you carry is called your genotype. The traits that you actually present are your phenotype. Parts of the genotype that do not show up in your appearance can still be passed along to your children.

Let’s apply this logic to hair color. We will use brown and blonde hair in our example and later discuss other common hair colors.

Now let’s take a look at how we can use genetics to guess your baby’s hair color. If you remember Punnet Squares from your biology classes in school, that is where we are going with this.

Brunettes Can Give Birth To Blondes

If one parent is blonde and the other brunette, they might have a blonde child. This can only happen if the brunette parent carries the blonde allele. If he carries only brown alleles, he can only pass on brown alleles, and they’ll dominate causing his child to have brown hair.

Looking back at the grandparents (the brunette’s parents), if one is blonde, he surely carries the trait. If both are brunette, however, it is still possible that one or both carry the blonde allele and could have passed it on.

If both parents are brunette, they can only have a blonde child if they both carry the recessive blonde trait. But even if they do, the chance of giving birth to a blonde is just one in four. 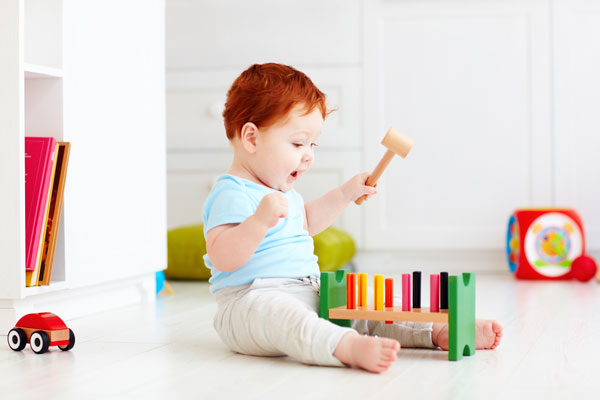 For a more detailed explanation on red hair, check out: What Are The Chances My Baby Will Have Red Hair?

What about Black Hair?

Black hair is the most common hair color worldwide. Black hair is made from a subtype of the same pigment that makes brown and blonde. It is a dominant trait and less likely to blend with lighter pigments than brown hair. In other words, it’s more likely for a baby born to a brown-blonde pair to end up with light brown or dark blonde hair. But if one parent has black hair, it is more common to see a jet black-haired baby.

In truth, the genetics of hair color is just a little more complicated than your basic biology class might claim. Hair gets its color from pigment, and the amount of pigment in the hair affects its exact shade. So we are not really looking at completely separate hair color genes, but rather differing amounts of the same kind of pigment: melanin.

Not only that but the amount of melanin present changes throughout life. A single person may have different color hair at different ages.

Two types of pigment give hair its color: eumelanin and pheomelanin.

Pheomelanin causes hair to look red or orange. All humans have some pheomelanin in their hair, but true redheads have little to no eumelanin. Mixes of eumelanin and pheomelanin lead to auburn or strawberry blonde hair.

Human hair color comes in a variety of shades depending on the particular mix and concentration of pigments. The Fischer-Saller scale, used in physical anthropology and medicine, identifies a variety of shades on the spectrum between light and dark, red and brown.

A separate range specifies red and red-blonde (I-VI). The scale also identifies black, gray from age, white from age, and white from albinism.

Albinism is a condition in which an individual carries no pigmentation, or very little. Without any melanin, there is no color, so someone with albinism will have white or very light blonde hair. Some types of albinism affect only certain areas of the body, but most affect the hair, skin, and eyes.

Albinism is rare and passed genetically. It is a recessive trait, so both parents would need to carry the allele for it to present. Hair is not a problem so much as skin, which can burn easily without any pigmentation to protect it. 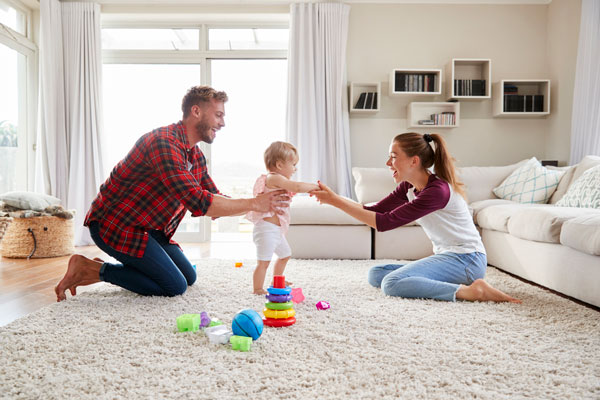 Hair color is not set for life. A baby born with dark hair may change to having light brown on blonde hair during the first six months. Even then, babies and toddlers with blonde or red hair often develop brown hair as they age. It may darken slowly during early childhood, or it may change more abruptly during adolescence due to hormonal changes. From mid-infanthood on through childhood, the most common changes in hair color are caused by increased concentrations of eumelanin.

Later in life, melanin stops being produced and hair turns grey and white. The age at which graying starts is determined by a combination of genetics and environmental factors.

It Gets Even More Complicated

As mentioned, the concentrations of two pigments determine the hair’s exact shade. But there is so much more to it, and science has not even fully caught up. Zooming in on granules of pigment in human hair, biologists have discovered that they can be fine, coarse, or obscure, and they may appear streaked or clumped. Their density varied on different areas of the same person’s hair, with no apparent order or pattern. And beyond pigment concentration, the exact shade presented depended on many factors, including transparency and reflectivity.

So, can you predict what color your baby’s hair will be? You can definitely make an educated guess. Some couples will be able to rule out certain colors (for the most part), while others can be sure there’s a chance for more than one result. Nevertheless, hair color can change over time. Whether you give birth to a strawberry blonde or brown-black haired baby, you cannot be sure he will stay that way!