You are 13 Weeks and 5 Days Pregnant 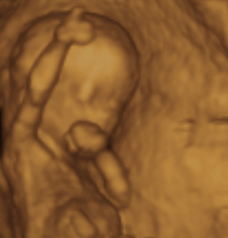 At this stage the head, although still large, has a much more rounded shape than before and, as the jaw and neck lengthen, the chin moves away from the neck. An ultrasound now will show the thumb as distinct from the fingers.
It's only a minor pregnancy symptom, but nasal congestion can happen most days-and make you a snorer at night!

Is your partner nudging you in the night because you're keeping him awake? It's common for pregnant women to snore. This is largely due to increased swelling of the nasal passages, but it can also be caused by increased weight and the fact that you may roll over onto your back during the night.

Your stuffy nose is due to the increased volume of blood in your body while you're pregnant. This can cause congestion and make your ears feel blocked, too. Nosebleeds are also very common in pregnancy; some women find that every time they blow their nose they have a small amount of bleeding. This is because the blood vessels in the nose are very fragile, and with the increased volume of blood flowing through them, they tend to bleed more easily. However, the bleeding should be very light.

To treat a nosebleed, tip your head forward and pinch the middle of your nose (in the soft part) hard. It should stop quickly. If it doesn't, try an icepack on the nose to help the blood vessels constrict. In the rare situation of heavy bleeding, go to the hospital. Seek medical advice if you are getting heavy bleeding regularly.

During the first trimester, you probably anxiously awaited developments in the pregnancy and supported your partner when the going got tough. Now that her early pregnancy symptoms, such as nausea and sickness and fatigue, are likely to have passed, and the risk of miscarriage is reduced, you may begin to feel differently about the pregnancy and your future.

As your partner starts to show increasing strength and vigor, and as you begin to notice her changing body shape and small belly, you may find that the reality of the pregnancy hits you and your sense of trepidation is replaced by optimism as you both look forward. 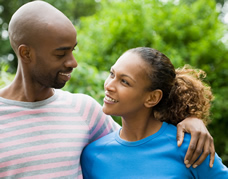 Is it safe to eat peanuts or foods containing them during pregnancy?

Some experts feel that if a child is at a particular risk of developing a peanut allergy, the problem may have started to develop before birth. Due to the mother's diet, a sensitivity to peanuts may have begun when the baby was exposed to them in the uterus.

However, recent studies have suggested that avoiding peanuts during pregnancy may be increasing the incidence of allergies, pinpointing countries where peanuts are a staple food and allergies relatively rare. Although studies have been inconclusive, your baby may be at risk of developing a peanut allergy if you, or your partner, or your baby's siblings suffer from asthma, eczema, hay fever, or other allergies. If any of these apply to you, ask your doctor whether you should eat peanuts during your pregnancy or while you are breast-feeding.

There is no need for you to avoid eating peanuts if your baby is not at risk of peanut allergy.