Day 7 of your Menstrual Cycle 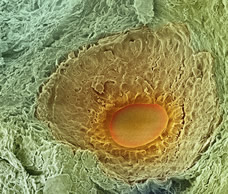 Here an egg can be seen, in orange, developing in the ovary. The cells of the follicle, in which it is contained, can be seen surrounding the egg. At birth, baby girls have millions of follicles present in their ovaries.

When you're trying to get pregnant, you need to take your age into account because your fertility will change as you get older.

In about a week's time you are likely to ovulate. At the start of puberty, you had no more than about 400 eggs in your ovaries, and will have made no new eggs. Your lifetime of eggs were there when you were born. Given these facts, it's hardly a surprise that your fertility falls as you age.

Women 20-24 are generally at their most fertile and although, for most women, periods continue until their early fifties, the rate of fertility gradually lowers in the 30s, 40s, and 50s and the rate of chromosomal abnormalities and miscarriage increases. Nonetheless, every year thousands of babies are born to women in their late thirties and forties. Women can conceive beyond that age, which is why doctors advise menopausal women to use contraception for two years after their last period.

If, however, you're hoping to start a family, it's safe to assume that fertility begins to fall off sharply after age 35. Your age also affects the quality of your eggs. In women in their early 20s, around 17 percent of eggs have a chromosomal abnormality, but the figure rises to over 75 percent in women in their 40s. Chromosomal problems increase the chances of having a child with a disorder such as Down syndrome.

If you're concerned about your fertility, it is possible to have a blood test that can give an indication of your remaining ovary function so that you know how much reproductive time you have left. While some tests are based on levels of FSH and estrogen, newer tests use other markers found in the blood, such as anti-Mullerian hormone (AMH) and inhibin B.

But making a baby depends on more than releasing an egg; it must travel down the fallopian tube, be fertilized, implant, and the pregnancy be maintained. There's also the father's contribution to consider. 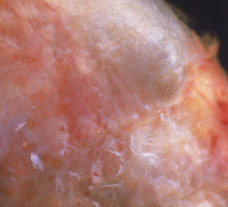 The follicle lies below the surface of the ovarian wall and protrudes just prior to ovulation. The follicle is most likely to rupture and release an egg mid-cycle, around days 13 and 14 of a 28-day cycle.

A man can continue to make sperm more or less throughout his life, so you might not expect male fertility to fall significantly. There are plenty of older fathers around that seemingly prove this.

Recent research from France, however, found that men over 35 took a lot longer to get their partner pregnant. For those who conceived, there was a slightly higher risk of miscarrying. This is because sperm from older men is more likely to contain damaged DNA. So although older couples do conceive, it's a fact that men, like women, pass their peak fertility.

This is why nature is bountiful when it comes to sperm, producing many millions with each ejaculation. On average each ejaculation produces 2-8 ml of semen, with over 40 million sperm in each milliliter.