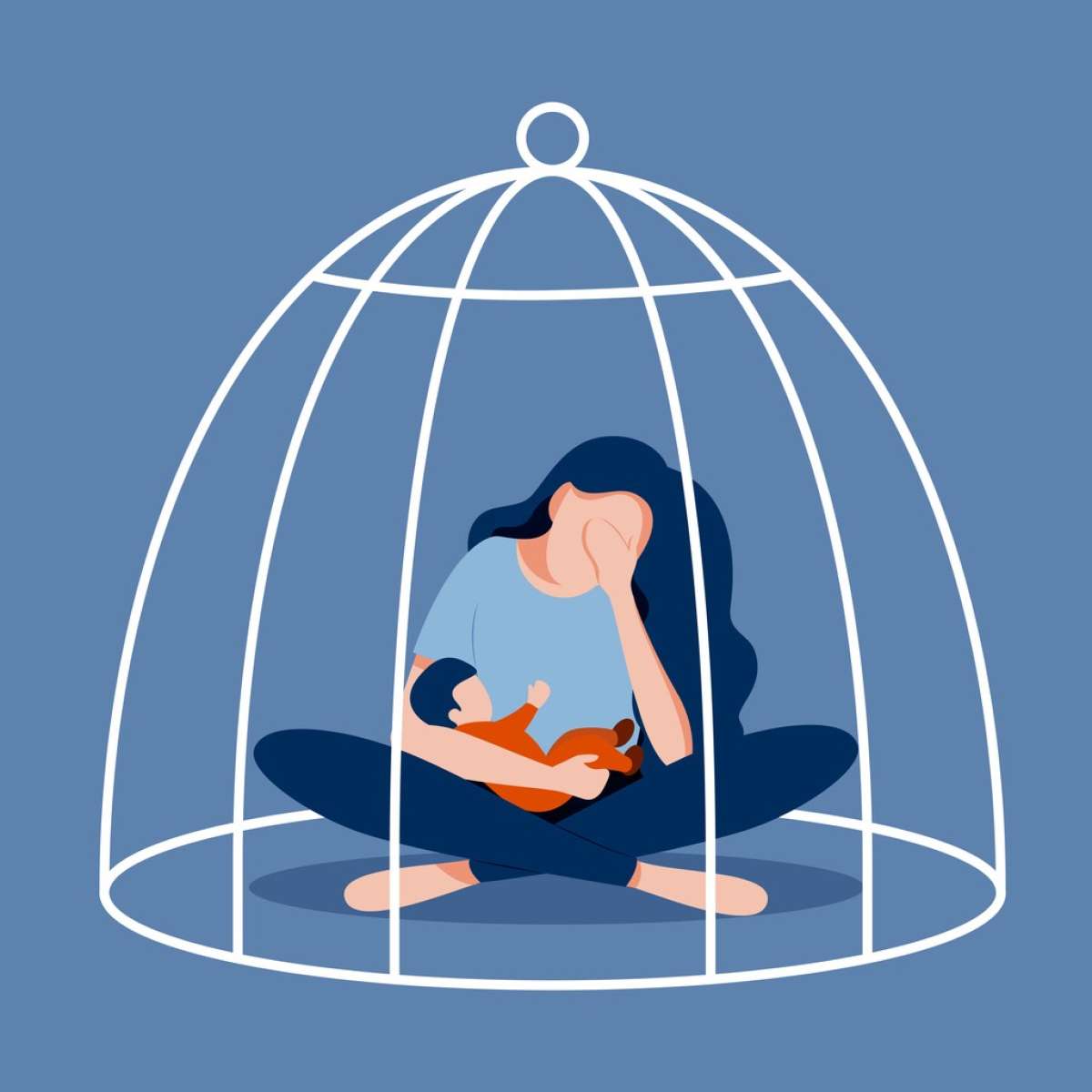 Postpartum depression is a type of depression a new parent experiences after the birth of their child. It can strike anytime within the first year after giving birth, but it is most likely to occur by week three post-delivery.

There has long been a stigma related to depression, particularly postpartum depression. How could you not be happy when you have a new, beautiful baby? It can all too often result in feelings that you must be a lousy mother or ungrateful for feeling depressed.

One of the most challenging aspects of postpartum depression is that there seems to be no rhyme or reason as to who experiences it. It can happen to first-time moms, parents having their third baby, and women of every race, religion, and socioeconomic status.

If you’re like me, your battle with postpartum depression is (or was) confusing, challenging, heartbreaking, and, yes, even enlightening.

I have a history of depression. I was diagnosed at 23, long before my first baby was born. However, when I welcomed him into the world, I was mentally in a very good place. I had a job I enjoyed, I loved the city I was living in, and I was one year into a two-year master of science program. Additionally, I was no longer taking antidepressants.

But I remember being fearful that I would experience postpartum depression. I knew, given my history, that I was at a higher risk. Reading this, you might think I created a self-fulfilling prophecy, but here’s the twist: I didn’t develop postpartum depression after my son was born. On the contrary, I was over the moon.

Yes, I had rough days, stressful days, and sleepless nights, but nothing outside the norm of being a first-time mom.

My postpartum depression hit me like a ton of bricks after my second baby, and I’m still struggling eight years later.

My eldest was born perfectly healthy, and I had an easy pregnancy and labor. Around the time he turned one, we noticed he wasn’t hitting his speech milestones, so we had his ears checked out. It turned out he had fluid in his ears and was hearing everything as if he were underwater. He rarely had ear infections, so we never knew. As a result of the problems with his ears, he developed a speech delay. We then began noticing other quirks as he approached 18 months old and had him evaluated through early childhood services. He was delayed in his walking but didn’t qualify for physical therapy. However, the specialist explained that he could benefit from occupational therapy for sensory processing in addition to speech therapy.

He was a happy toddler, but like many kids with speech delays and sensory issues, tended to play rough and hit or bite when he felt angry or couldn’t express himself. I began to notice that other parents and teachers would comment on his behavior and didn’t understand why he couldn’t be “calm and behave.” It was especially a struggle with parents who didn’t know him, like at the local playground.

As he approached three and his new baby brother was about to be born, some of his behaviors intensified. He was, as they say, becoming a handful, and I was tired. My second pregnancy, while still easy, was harder on my body. I was older and I had a two-year-old. Nonetheless, I was excited to have another baby. However, the reality of having a second baby was more challenging than I had ever imagined.

When my second son was born, we lived in Chicago, far away from family and close friends. I had a small support system but no one who could truly help me when the going got tough or regular. I didn't have that friend or sister a mere five minutes down the road. Plus, I am a very private person and was stubborn and didn’t like to admit I couldn’t ‘do it all.’ Dad was a full-time med student and had a hectic schedule.

I quickly started to feel overwhelmed and helpless and was beyond tired. My new baby refused to take a bottle no matter what we tried, so dad couldn’t even help with the feedings. I had no trouble bonding with him, but I didn’t feel the same joy and excitement I did as a first-time mom.

When my depression came back, I didn’t recognize it at first, and it took me several years to admit I was depressed again. I didn’t want to face that reality and wanted people to believe I had the picture-perfect social media life I displayed. No one knew I was suffering. I kept plugging forward because my kids needed me, and I had no other option.

My depression became such a big part of my everyday life that I just assumed I would feel sad and stuck for the rest of my life. Still, no one knew. We moved back to the east coast two years after my second son was born, and by then, my eldest son, now five, was facing a host of problems related to his sensory processing and newly diagnosed anxiety. As parents, we chose to hold him back a year from kindergarten because of these concerns. But, no one else seemed to understand when I did try to talk about them because, at preschool and around others, he presented himself as relatively calm and happy; a typical five-year-old.

He continued occupational therapy and therapy with a psychologist to help but things were rough. Tantrums, delayed potty training, running away in public, leaving the house, physical aggressions. I cried a lot. But I held it together in public and still wasn’t ready to admit I was depressed.

I hit rock bottom. Newly (amicably) divorced, living alone with my kids, and being new to the area meant I had few friends. One night, I broke. I sat down on the floor of my bedroom and cried and cried. I didn’t enjoy anything anymore, not reading, music, theater, teaching, or spending time with my kids. It was all too much.

So I sought help. I first reached out to two people I had become close to via the theater that I could trust and knew cared about me. It was a very bumpy road. My first psychiatrist was a train wreck and an unkind person. I tried online therapy and that didn’t work. Finally, I found an office five minutes from my place of work and started there. I loved my therapist, but after six months, she left. I tried someone else at the office but we didn’t connect. They eventually had an opening with a third person. To this day, four years later, I still see her, which is one of the best things I have ever done.

I had a lot to unpack from four years of fighting depression. I didn’t want to admit I was there, but my therapist slowly helped me realize that part of what was going on was postpartum depression that never had a chance to heal. I was stuck in survival mode for so long that I couldn’t give anything to myself. As a result, I was also taking away from my kids. I felt like I couldn’t always give them what they needed and then would cry and be mad at myself for being a ‘bad mom.’

The last few years have been a revelation, and the light has slowly started to creep back in. I made time for myself and my kids, and I began to take joy in things again. I have set boundaries for myself, something I was never able to do before. I have also learned to ask for help when needed from my now partner, friends, babysitters, or family. I can now see that being depressed doesn’t make me a bad mom; however, it contributed to some poor choices.

I don’t think my depression will go away this time as it did in my 20s, and while it's tough to accept that, I am learning how to be okay with my depression.

Some days, weeks even, are still bad. But I have tools in my toolbox I didn’t before. I can recognize patterns. I know what things may help me feel better and which things to avoid. I can say “no” when I just don’t have it in me but can follow through later when I do.

I also have people I can talk to now, and that, I think, is essential. Don’t suffer alone as I did; find your tribe, whether through a hobby, support group, online chat group, religious institution, the PTA, or wherever you feel safest. Find at least one person you can talk to. Parenting is hard; postpartum depression makes it feel impossible at times.

Depression can affect a person for so many known and unknown reasons. It’s not just feeling sad for a day or two or having an off day; it's often an ongoing battle, but it is one you can win. If you are or believe you are dealing with postpartum depression, seek help. Sometimes simply speaking the words aloud to someone you trust is enough to get the ball rolling and lift the weight from your shoulders.

This Winnie the Pooh quote is often used but remains one of my favorites:

"You are braver than you believe, stronger than you seem, and smarter than you think."- Christopher Robin

Resources to help with postpartum depression