Jacqueline Weiss
While the effects of diet during pregnancy on the fetus have been debated and discussed, the diet at the time of conception may cause permanent changes in the DNA of the children.
Table of contents

A study, published in Nature Communications, is the first to show that an environmental factor can change a baby’s DNA long term during the first few days of development. Conducted for two years across 34 villages of The Gambia in Western Africa, the results show a child’s genes could be differently interpreted based on the mother’s diet.

More: How Prenatal Diet and Genetics Impact Baby's Health as an Adult

Don't have time to read now? Save it for later: 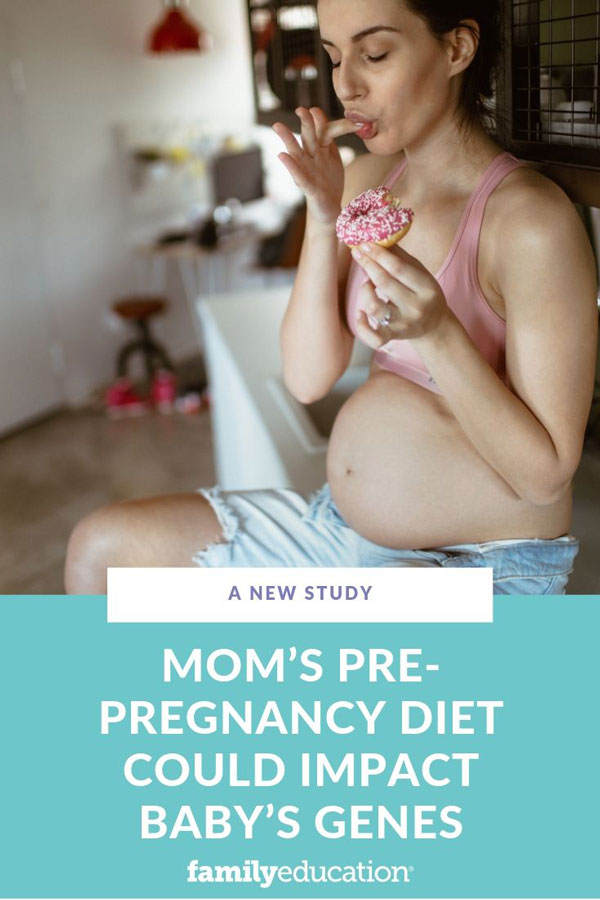 In the study, the diets of women in rural areas of The Gambia were analyzed, where residents undergo major changes in their diet throughout the year as the area goes through dry and rainy seasons.

Study author Robert Waterland, a nutritional epigeneticist at Baylor College of Medicine in Houston shared with Scientific American: "The rainy season is often referred to as 'the hungry season,' and the dry season 'the harvest season.’ During the rainy season, villagers have a lot more farming labor to do, and they gradually run out of food collected from the previous harvest."

While in The Gambia, yearlong staples of the women’s diet includes rice, millet, peanuts, and cassava, in the rainy season they consume more leafy greens like spinach, which are high in folate (a nutrient found in most prenatal vitamins).

A methylation is a so-called epigenetic modification to DNA, which can silence the expression of a genre. Typically, methylation depends on key nutrients such as choline, folate, methionine, vitamin B2, and vitamin B6, and in this study the methylation was linked to the various nutrient levels in the mother’s blood.

"Our results represent the first demonstration in humans that a mother's nutritional well-being at the time of conception can change how her child's genes will be interpreted, with a lifelong impact," senior study author Branwen Hennig, of the London School of Hygiene & Tropical Medicine, said in a statement to Scientific American.

What Are The Study’s Shortcomings?

For the purposes of this study, the researchers only looked at the conceived children when they were two-eight months old, and didn’t follow how the genetic changes could overall affect their development later in life. Since only six genes were studied, it can be even more difficult to tell if diet actually caused the higher rates of methylation in the DNA.

While other studies have shown that similar genetic changes may determine a child’s risk for some diseases, the answers to many of these questions are largely unknown right now. Nutritionist Andrew Prentice, who contributed to the study shared with NPR:

"Can diet affect other genes? What's the biological impact of those [DNA] modifications? At the moment we don't know the answer to those questions. But subsequent research we have — and haven't [yet] published — says it does matter."

Some questions may be up in the air right now, but that does not diminish that this study was the first to show results of this kind, Henning explains: "Our results represent the first demonstration in humans that a mother's nutritional well-being at the time of conception can change how her child's genes will be interpreted, with a lifelong impact.”

How Can Mom’s Ensure Nutritional Balance?

Much like expecting mothers are generally given advice on what kinds of food they should be consuming during pregnancy, similar advice seems to apply if you are trying to conceive. If that is the case, ensuring you have a solid nutritional balance should be discussed with your OB/GYN or a nutritionist to ensure that you and the baby are both getting all of the right foods in your diet for a healthy pregnancy. Similarly, taking into account increased physical activity, which means you may need to consume more nutrient-dense foods, is important to keep in mind.

Prentice shared in a statement: "Our ultimate goal is to define an optimal diet for mothers-to-be that would prevent defects in the methylation process. Preconceptional folic acid is already used to prevent defects in embryos. Now our research is pointing towards the need for a cocktail of nutrients, which could come from the diet or from supplements."

Wondering how your pregnancy diet might impact your baby? Researchers recently answered Is There a Link Between Processed Foods and Autism?