Breech labors and births are usually more difficult, so if your baby is still in a breech position in late pregnancy, you may be offered a procedure to turn your baby.

The procedure to turn your baby, external cephalic version (ECV), is usually offered at around 37 weeks if a baby is still in a breech position. The doctor presses on the lower part of your belly to elevate your baby's bottom out of the pelvis. Pressure is used to rotate your baby until he is head down. The procedure may feel uncomfortable, and you may be given medication to relax the uterus. A scan is often done before and after the procedure.

The success rate for ECVs is often over 50 percent. Complications, such as bleeding behind the placenta and premature rupture of the membranes, are rare. If an ECV is unsuccessful and you want to try for a vaginal birth, you will be advised to deliver in a hospital so help can be provided quickly if needed. In some cases, the position of a breech baby is likely to make vaginal delivery difficult and a cesarean will be advised.

Occasionally it isn't discovered that your baby is in breech until you're in labor. This happens because it can be hard to distinguish between a baby's head and bottom by feeling your belly alone.

If a breech is diagnosed in labor, you can still have an ECV but at this stage it has a lower success rate. An ECV may not be possible in labor if the water has broken, if you're in advanced labor, or if there's no one to do the procedure.

Delivery of your baby

If you try for a vaginal birth, you should be in a hospital with an ob/gyn present, since you may need an assisted delivery or an emergency cesarean. Fetal monitoring should be done throughout labor, since babies in distress will need to be delivered by cesarean. Sometimes a breech baby has problems getting oxygen and blood through the umbilical cord, if it's squeezed into the wrong position.

You'll be advised to have your baby's heartbeat monitored throughout labor, and you may have an IV in case you need a cesarean. You may be asked to lie on your back with your feet in stirrups so that the doctor can access the baby. An alternative position is to stand or be on all fours. Your bladder may be emptied with a catheter and an episiotomy cut may be done to prevent a more serious tear (see Episiotomies). The doctor may apply gentle pressure to the baby's arms or legs during birth, but you're unlikely to notice this. Except for these differences, the birth is likely to feel the same as the birth of a head-first baby. During the birth, the head will be eased out of the birth canal either by hand or with forceps. to control the speed of the birth, which should be neither too fast nor too slow.

A cesarean is likely if complications arise, for example the baby shows signs of distress; the cord slips below the baby's bottom; the cervix dilates too slowly; or the baby isn't descending.

Positions of a breech baby 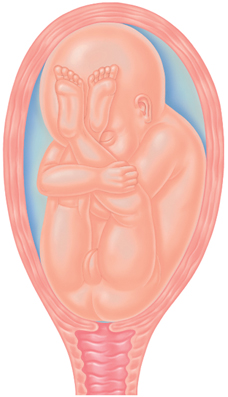