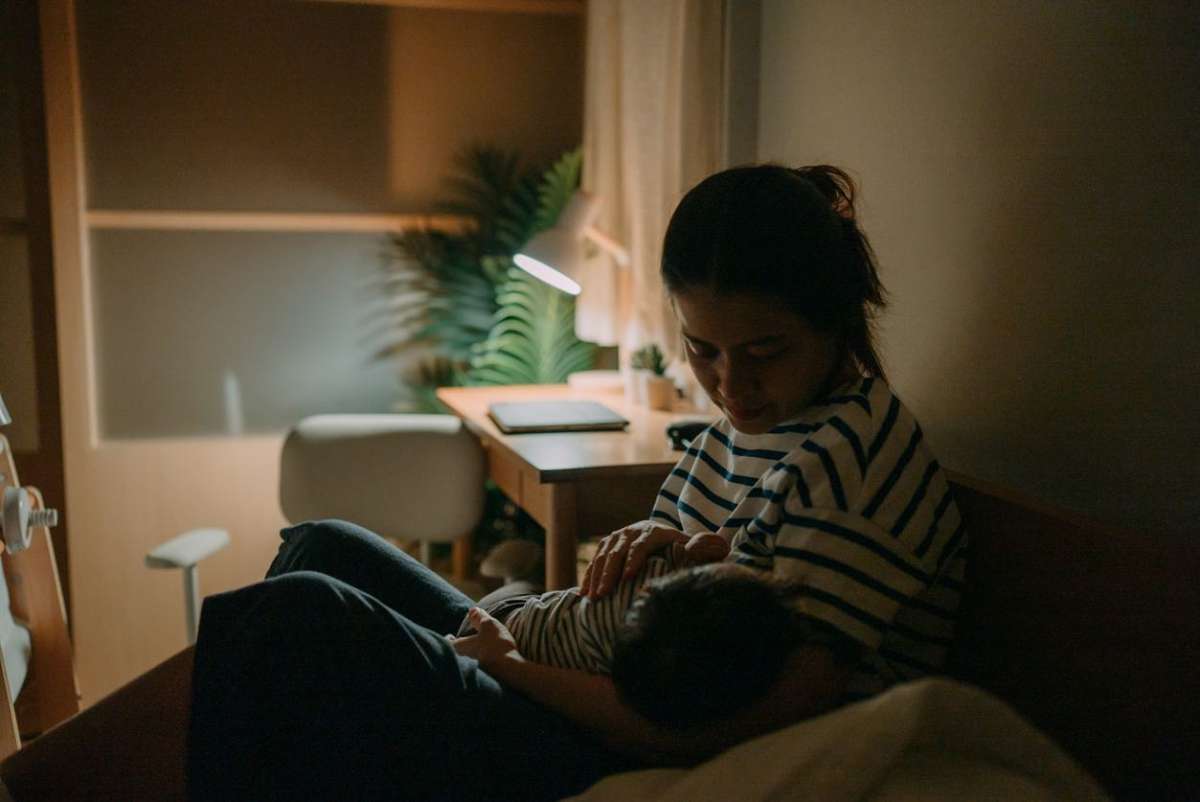 Nighttime Feedings and Sleep Tips for Your Breastfed Baby

Learn helpful hints about late-night breastfeeding, plus advice on sleep and sleep safety for breastfed babies.

Nighttime Feedings and Sleep Tips for Your Breastfed Baby

Night Nursings
Because breast milk is so rapidly digested, breastfed infants awaken to nurse often, including at night. Although this means that your sleep will be disrupted, night nursings in the early weeks and months are essential to provide your baby with adequate nutrition and to maintain a generous milk supply. At least there is no formula to mix and no equipment to get ready! Initially, your baby will probably sleep in a bassinet at your bedside, where you can simply scoop him up and bring him in bed with you to nurse. You can feed either lying down or propped up with pillows. No harm will be done if you doze off while nursing. Many parents choose to sleep with their babies, and even their older children-a practice known as the "family bed." Such a choice is highly personal, with some parents finding the idea unacceptable, while others insist it is the ideal way to parent a newborn at night. Bedsharing has been shown to increase the number and length of nighttime breastfeedings and has been speculated to reduce the risk of sudden infant death syndrome (SIDS). Although bringing babies in bed with parents commonly is frowned upon in our society, such sleeping arrangements are highly prevalent in developing countries all over the world. Parents who have a family bed usually attest that night nursings are minimally disruptive.

Infant Sleep Precautions
Do not allow your baby to sleep on a water bed, however: babies have suffocated while sleeping on water beds, either by becoming trapped between the mattress and the sideboard or by creating a sinkhole depression with their heads that caused them to rebreathe their carbon dioxide. I also am compelled to mention here the relationship between infant sleep position and SIDS, the unexplained sudden death of babies under a year of age. SIDS is the most common cause of death in infants between one month and one year of age in the Western world. Most cases occur in babies between two and four months of age. Until recent years, most babies in the United States were put to sleep on their tummies. But mounting evidence now confirms a relationship between the prone (tummy down) sleeping position and SIDS. Based on this evidence, in 1992 the American Academy of Pediatrics began to strongly recommend that babies be put to sleep on their backs or on their sides, but NOT in the prone position. You should know that the side position is less effective in preventing SIDS than sleeping on the back. Public awareness campaigns have been conducted to inform parents that they should not put their baby to sleep in the tummy-down, prone position. This simple change in infant care has resulted in substantial reductions in the number of SIDS deaths in America, as well as in many other countries. I should also add that putting a baby to sleep on soft pillows, comforters, or fluffy bedding is a risky practice. A baby's exhaled carbon dioxide can become trapped in soft bedclothes, causing a baby to suffocate when rebreathing her own carbon dioxide. To protect your baby, put her down to sleep on her back on a firm mattress, without any pillows or soft bedding.

Sleeping Through the Night
By six weeks of age or ten pounds of weight, some infants will sleep up to six hours at night, while others still awaken after three to five hours. If your baby awakens and appears genuinely hungry, it makes sense to nurse him instead of trying to get him to sleep through the night. During night nursings, keep things subdued and "strictly business." Use dim lighting, don't play with your baby, and don't even change his diaper unless he has had a bowel movement or has a diaper rash. As long as your baby is awakening at night, you should make it a priority to nap when your baby naps during the day in order to maintain your physical well-being.

One of the most common explanations for faltering weight gain in a once-thriving breastfed baby in the early months of life is that the infant began sleeping eight or more hours at night. Sleeping through the night is a welcome relief to sleep-deprived parents, but it can undermine breastfeeding when it happens too soon. When a young baby (under about four months) sleeps all night, not only does she miss one or more important feedings, but the mother's breasts go a long interval without being emptied. All too often, the result is diminished milk supply and inadequate infant weight gain. Remember that persistently full, engorged breasts send a powerful message to the body to decrease milk production. The first time a breastfed baby sleeps through the night, the mother usually awakens with hard, uncomfortable breasts. A few days later, she may remark that her breasts are no longer uncomfortably full in the morning. The explanation is that her milk supply has decreased because her breasts are being emptied less frequently. If your baby starts sleeping through the night while you are fully breastfeeding, I suggest you use hand expression or a breast pump to empty your breasts just before you retire. Expressing milk before your bedtime will shorten the interval that your breasts go unemptied. This will help maintain your level of milk production and help assure that your baby gets enough to eat during her waking hours. You can freeze the milk you express and save it for later use. If you choose not to express milk before you retire, make sure both your breasts get well drained first thing in the morning. Due to the abundant milk available after a long night interval, your baby may leave significant milk after the first morning feeding, especially on the second side. Hand expressing or pumping the extra milk remaining after he nurses will assure continued generous production the rest of the day.