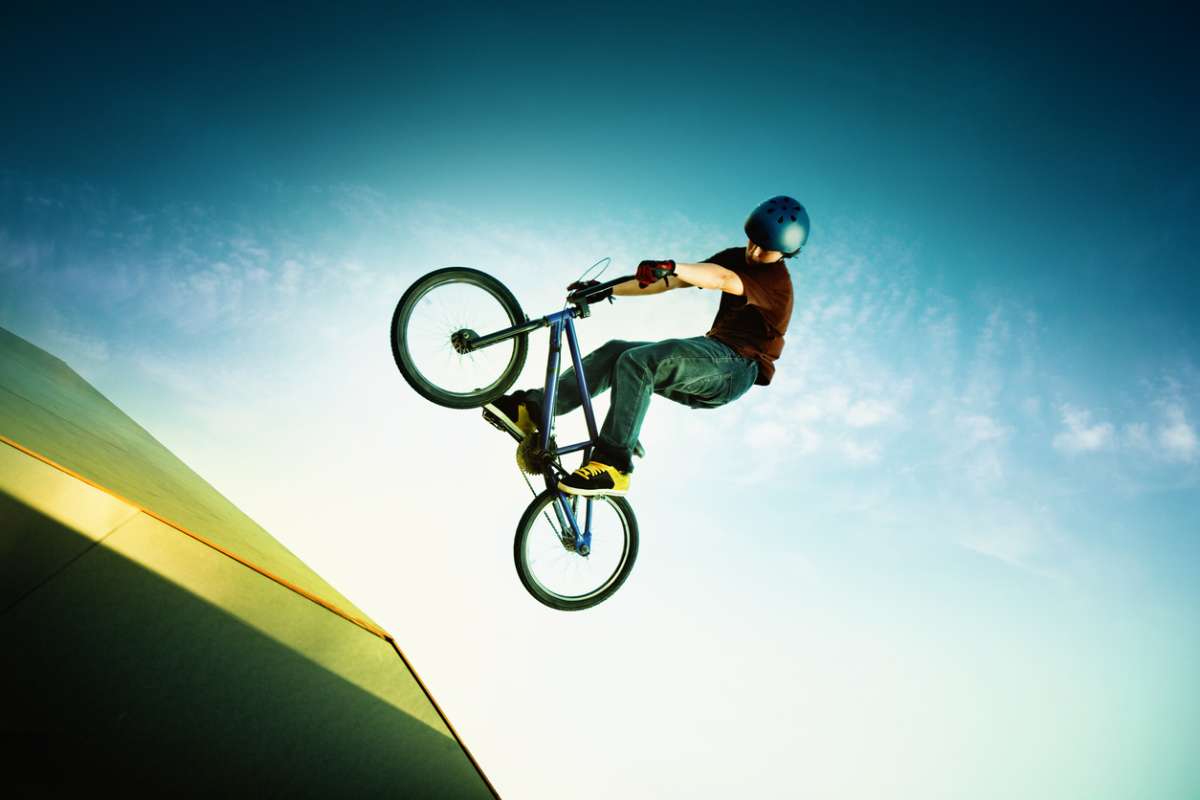 Kids and Extreme Sports: Should They Be Allowed?

Should kids do extreme sports? BMX riders, snowboarders and X Game stars weigh in on the benefits and risks of kids doing extreme sports.
Erica Loop
Table of contents

Is your kid obsessed with becoming the next X Games star, Olympic medalist, or YouTube stuntman? Young kids often have no fear when it comes to taking risks, but are extreme sports like dirt bike riding and bungee jumping dangerous for kids?

Though traditional sports like football, basketball, and hockey aren't exactly going out of style, the world of extreme sports is growing in popularity. Kids and adults alike are participating in increasing numbers in these risky—if not sometimes downright dangerous—sports. But why?

From skateboarding and snowboarding to BMX biking and rock climbing, pop culture and social media have collided to amp up physical activity and make super-sized stunts seem like the norm. Long gone are the days when peer pressure from classmates, neighbors or older sibs drove younger children to drop into a half-pipe or launch their bike off a crazy incline.

Today’s kiddos are also influenced by…well, influencers. YouTube stars, TikTok creators, and even Olympic athletes have turned extreme sports from something that only the wildest child would attempt to everyday activities.

If your littles are begging to do extreme sports and you’re totally new to these types of activities, read on for more info on the risks, benefits, times to encourage your kiddo, and when to flat out say a big ‘ol, “NO.”

Some kids are happier riding their skateboards than dealing with the structure of soccer practice. Others like cruising around on their BMX bikes until their legs just quit, surfing themselves silly, or spending the entire weekend learning new tricks on their inline skates.

Of course, young kids are also attracted to extreme sports because they're cool. And who doesn't like being on the cutting edge? Snowboarding, the bad-boy little brother of skiing, was legitimized by sports traditionalists when it became an official Olympic event at the 1998 Nagano Games.

Fast-forward to the 2020 Tokyo Olympics (which were actually held in 2021 thanks to the pandemic) and skateboarding, sport climbing, and surfing became legit gold, silver, and bronze events!

Have the days of dribbling a ball down a court or passing a puck gone the way of the dinosaurs? According to stats from Project Play, in 2021 the most popular youth sports for children ages six through 12 were bicycling, basketball, and baseball. Even though more than 5.2 million children biked in 2021, this was a significant change from way back in 2008.

The Project Play statistics show that only 18 percent of children reported bicycling in 2021, while a whopping 27.7 percent got active on two wheels in 2008.

Basketball team play dropped from 16.6 percent to 14.5 percent participation and baseball from 16.5 percent to 12.6 percent between 2008 and 2021. The number of children playing other popular team sports, such as soccer, tackle football, and flag football, also dropped during the same time frame.

Basketball is Less Popular But Bicycling is Big with Teens

The same downward trends didn’t happen for teen participation in all traditional sports. Bicycling participation grew from 16.8 percent to 21 percent between 2008 and 2021 and baseball play rose from 8.2 percent to 9.5 percent.

What could account for the overall downward trend in team and individual youth sports play? There isn’t one reason. But some of the possible explanations include an increasingly competitive climate, the high cost of intensive travel sports (such as hockey), or interest in other activities —such as extreme sports.

We spoke to Paul Vail, 29, a BMX freestyle bike rider for more than 14 years to learn more about the kinds of extreme sports kids are trying.

Vail says that when it comes to extreme sports, "Today's kids who've been riding skateboards or BMX bikes since they were 12-year-olds will become the parents who say, 'Yes, skateboarding, bike riding -- perfectly acceptable sports for my kid to do. And don't tell me they have to play football or be on the basketball team to be accepted, because that's no longer true.'"

Vail balks at the term "extreme sports." "People have been skydiving, skiing, riding bikes, doing tricks, and taking jumps forever. I think the extreme sports label is a gimmick. I like the term 'alternative sports'."

Extreme or not, it's important to encourage kids to express themselves physically, whether their athletic tastes are trendy or traditional. Both solo and team-oriented sports can build self-confidence, relieve stress, and promote physical fitness -- all of which are vital to growing kids and adults alike.

Kids in Ski Jumping or Snowboarding

BMX, skateboarding, and bungee jumping aren’t the only extreme sports kids flock to. Even though ski jumping might seem like a new adventurous activity, it made its Olympic debut way back in 1924.

Of course, this doesn’t mean kiddos were climbing up mountains, whooshing down slopes, and flying into the air on two skis a century ago. While this soaring sport isn’t exactly new, its youth appeal has spiked in recent years. According to Women’s Ski Jumping USA, five to eight years old is the age average for ski jumpers to start the sport!

Like ski jumping, snowboarding is a winter-time extreme sport that has skyrocketed in popularity. Again, snowboarding became Olympic-official in 1998. Almost a decade later, in 2006, then-19-year-old Shaun White made his first bid for the gold. But White certainly wasn’t the last teen to take this extreme sport up a level and put it center stage.

Seventeen-year-old Chloe Kim became the youngest women’s Olympic halfpipe competitor to nab the gold in 2018 at the PyeongChang games. With role models like White and Kim to follow, a whole new generation is getting into the halfpipe!

Not only do today’s kiddos follow these, and other top athletes, but during the Olympics, they can watch the extreme antics of snowboarders on YouTube, TikTok, and just about every other social media site.

How dangerous are extreme sports? As a parent, your child’s safety is priority number one. And that’s why you’re not so sure about your kiddo’s extreme activities. Even though extreme sports do often come with, as the name implies, extreme risks, these aren’t the only athletics that can result in serious injuries.

According to Stanford Medicine Children’s Health, each year over 3.5 million children (14 and under) are injured during sports play. This includes more than 775,000 kiddos who require ER treatment. The majority of the injuries requiring hospital-level care are the result of collisions, falls, overexertion (during informal recreational activities) or object-related impacts.

When it comes to the most injuries per sport, football takes the top spot—with nearly 215,000 five- to 14-year-olds treated in hospitals in one year. This number is higher than what you find with some extreme sports. But in general, more children play this type of traditional team sport than engage in extreme activity.

A 2015 study published in the Orthopaedic Journal of Sports Medicine looked at the prevalence of head and neck injuries in extreme sports. The researchers found that between 2000 and 2011 there were more than four million total injuries from these types of activities (this includes adult injuries).

Fear is probably the number-one reason many of us avoid taking risks. For athletes in extreme sports, conquering fear is part of the adventure of sport. When a skateboarder is practicing tricks on a 15-foot ramp (commonly called a half-pipe), or a mountain biker is flying down a rock-strewn single-track trail, and he makes a mistake and falls -- well, it's going to hurt a little. Okay, maybe a lot.

But the athletes we spoke to didn't complain about injuries. In fact, most have enjoyed relatively injury-free experiences in their sports. Brian Krause, a competitive skydiver for the U.S. Army's Golden Knights, has taken thousands of jumps out of airplanes without so much as a sprained ankle.

But Matt Donovan, a pro downhill mountain bike racer from Massachusetts, said that when he first got serious about racing, his season was "very injury-laden. I had two concussions, a separated shoulder, a broken hand, multiple cuts, and lacerations. And I cracked a rib."

There are two kinds of sports injuries:

Is It Wrong to Let Children Do Extreme Sports?

Should safety concerns stop your child from trying an extreme sport? There’s no one-size-fits-all answer to this question. If your adventure-loving kiddo is all about skateboarding, snowboarding, parkour, BMX biking, or any other high-octane activity, you will need to think about:

Your Child's Age and Developmental Level

Is your child developmentally ready to handle the challenge? What is their skill level when it comes to basic coordination and athletic tasks like running, jumping, and balancing? Can you trust them to act responsibly, follow an instructor's directions, and wear safety equipment correctly?

Does your child want to become the next Tik Tok star? If your tween has dreams of easily twisting a BMX bike around in mid-air like their fave influencer or thinks videos of teens crashing their skateboards into just about anything and everything is hilarious, they may struggle to stay safe while engaging in an extreme sport.

The Instructor or Coach

Who will teach your child about the sport? A YouTube video or IG video are not a substitute for the real deal. Only a qualified instructor or professional should instruct your child.

Do you know what safety equipment your child will need? Will they wear it? You may need to learn more about the equipment standards before you allow your child to participate in extreme activities.

What types of equipment do children need? The specific items depend on the sport. These could include a helmet, shoulder pads, shin pads, elbow pads, or wrist guards.

When is an extreme sport too extreme? If you don’t feel comfortable with your child engaging in the activity or don’t feel that they can follow safety directions, it’s okay to just say no. Some sports are not age-appropriate for younger kids, and you should wait until they’re a bit older to try them out.

It’s also okay to talk to ask questions, talk to a pro, or take your time gathering facts, stats, and any other info about the adventurous activity! Learn more about extreme sports by taking our quiz here.