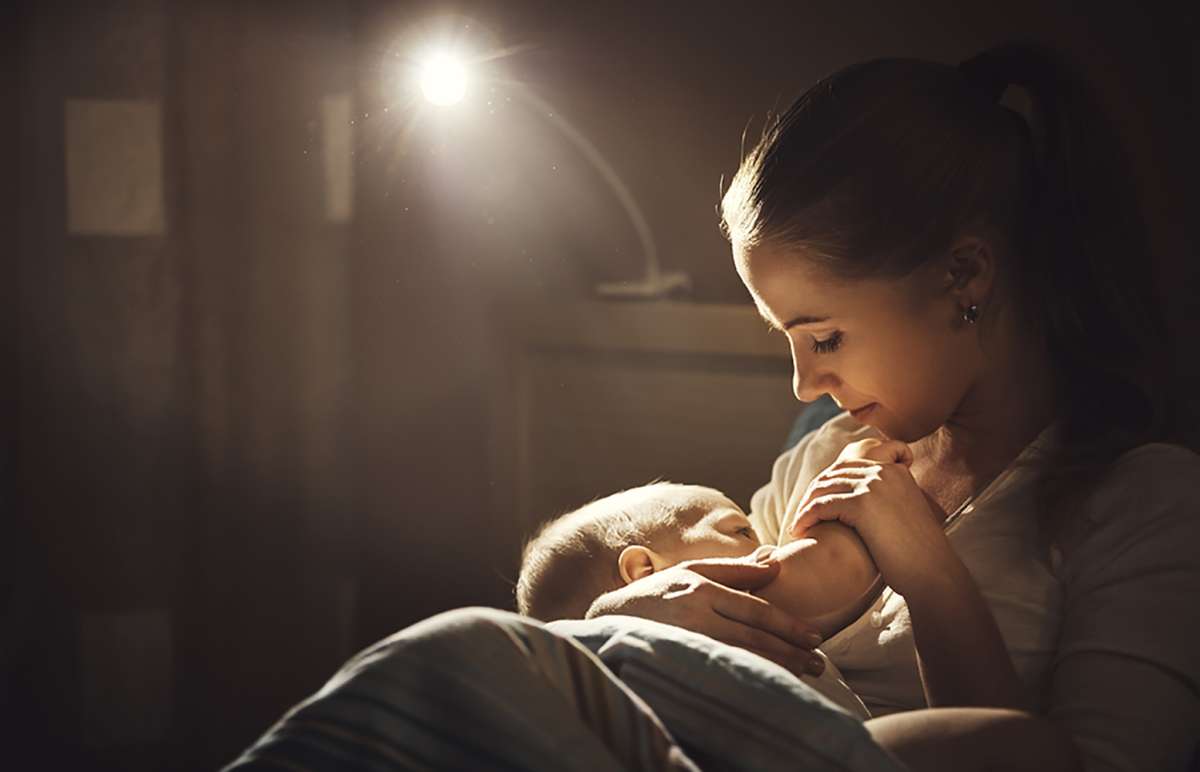 Learn about changes in breastfeeding habits and patterns, and breastfeeding challenges you may face early on and as your baby gets older than 6 months or 1 year, such as teething, biting, not sleeping through the night, favoring one breast, and bowel movement issues.

Changing Breastfeeding Patterns
As you settle into nursing beyond the newborn period, you can expect your baby's routines to become more predictable. Gradually, he will have longer intervals between feedings and nurse fewer times each twenty-four hours. He may nurse with remarkable efficiency at some feedings or linger at the breast for comfort and security. Although babies' nursing patterns vary widely, at least seven nursings a day and one feeding at night will be likely for several months. Your best strategy for long-term breastfeeding success is to remain in your baby's presence as much as possible and continue to nurse him on demand.

Infant Bowel Movements
Sometime between one and two months, it is common for breastfed babies to begin passing bowel movements less frequently. For many mothers, this is a welcome change from the early weeks, when breastfed infants may stool after every nursing. Your baby may go several days, even a week or more, without a bowel movement. This is not considered constipation because the infrequent stools are not firm or hard to pass. Instead, they usually are loose and passed without difficulty. Sometimes they are quite large-a "mudslide," according to one mother.

Nursing Habits
As breastfed infants get older, they typically nurse more efficiently, as they perfect their technique and your milk ejection reflex becomes well conditioned. By three months, some babies can empty their mother's breast in five to seven minutes. Busy mothers may appreciate the opportunity to shorten nursing sessions, but I must caution you not to make your infant feel "rushed" through feedings. This can lead to a nursing strike. Despite your baby's improved efficiency at extracting milk, he still needs ample time at the breast to leisurely nurse for comfort. When he has emptied the first side well, move him to the second breast to continue the feeding. Allow him to remain at the second side as long as desired.

As the months pass, your baby will become more fascinated by his surroundings. He may be easily distracted during nursings by new sights or sounds or the antics of a sibling nearby. He may either pull off your breast to check things out, or worse yet, turn his head without unlatching-taking your nipple with him! To help your baby stay focused during feedings, many mothers make an effort to nurse in subdued surroundings, like a quiet, semidarkened room.

Biting
Your baby may begin cutting teeth around four to six months. It is a widespread misperception that babies cannot continue to nurse once they have teeth, and the presence of infant teeth has caused many women to wean unnecessarily. The truth is that babies can nurse into toddlerhood with a full set of teeth without causing their mothers discomfort. Sometimes the upper teeth will leave a painless indentation on the mother's areola at the end of the nursing.

An infant may try to bite or chew his mother's nipple when he first cuts teeth. Biting doesn't occur during active nursing because the infant's tongue lies over his lower teeth. Instead, biting tends to occur at the end of the feeding after the bulk of the milk has been taken and the infant is restless or playful. The shock and pain of being bitten usually provokes a big reaction in the mother that startles and upsets her infant. Most infants quickly learn the unacceptability of biting if the mother sharply says "no" and removes her breast. When your baby is first getting teeth, it is wise to remove your breast after rhythmic sucking has stopped and move your baby to the second breast before he has a chance to bite. It won't take him long to learn not to bite. If an infant's bite breaks the skin, this should be reported to your doctor who may decide to treat you with antibiotics. Human bites are easily infected and mastitis can occur.

Care of the Teeth
Before a baby's teeth first erupt, parents need to learn how to keep them healthy and how to prevent baby bottle tooth decay (BBTD), which is a major cause of dental cavities in infants. As the name suggests, the problem occurs most often in bottle-fed babies, especially those who take a bottle of formula or other sugar-containing liquid to bed with them. When the teeth are bathed in a sugary liquid for prolonged periods, bacteria in the child's mouth change the sugar to acid. The acid attacks the enamel of the child's teeth (especially the upper front teeth), causing decay. Without early treatment, BBTD can progress rapidly and lead to pain, infection, and destruction of baby teeth. Early loss of baby teeth causes the permanent teeth to be crooked.

Parents are often surprised to learn that BBTD can occur in breastfed infants as well as bottle-fed babies. Almost any liquid other than water that is in prolonged contact with the baby's teeth and gums can cause the problem. The risk is greatest for those breastfed infants who co-sleep with their mothers and keep the breast in their mouth throughout the night, bathing their teeth in milk. Some babies' teeth are more prone to decay than others. The first sign of BBTD is white spots on the upper front teeth, which can be difficult to see without proper equipment. The American Academy of Pediatric Dentistry recommends that babies should see a dentist when their first baby tooth erupts, usually between six and nine months. A pediatric dentist can carefully examine your child's teeth for early signs of decay.

In addition to early and regular dental care, you can help prevent the problem by keeping your baby's mouth clean. Gently wipe your baby's gums and any teeth with a damp infant washcloth or a gauze pad after feedings and before bedtime. Once your baby has seven to eight teeth, begin brushing them daily with water and a soft-bristled infant toothbrush. Don't use a fluoride toothpaste until your baby is about three years old.