You are 7 Weeks Exactly Pregnant

This early vaginal ultrasound scan shows the first signs of pregnancy: the black central area is the fluid-filled cavity in which your baby (not visible) is developing. Within this is a small circular area, which is the yolk sac.
As your baby's body continues to develop, it won't be long before some very general movements will be visible on a scan.

While you're dealing with early pregnancy symptoms, your tiny embryo is tightly curled in your uterus. There is a short portion at the lower end of the spine that in other species goes on to develop into a tail. This portion now starts to disappear as more recognizably human features appear.

The ends of your baby's limb buds flatten, like paddles, and begin to form short digits that will become your baby's tiny fingers and toes. At first these are fused together-then, like the remainder of the skeleton, the digits grow around a soft framework of cartilage that will gradually harden into bone. As the upper limb buds lengthen, your baby's elbows begin to form.

Your baby's eyes continue to develop but won't be fully formed until around week 20; his nostrils now appear as two shallow nasal pits.

Help! I'm pregnant again and my little boy is only 12 months old. How will I cope?

Pregnancy can be exhausting, particularly in the first trimester, when your body is adjusting to the new demands placed upon it. Having a toddler to contend with at this time makes it even harder.

Find quiet activities to enjoy with your toddler and leave the rough and tumble play to someone else. Take time to nurture yourself, sleeping when your toddler naps, or just settling down on the sofa while he watches a DVD. Don't feel guilty about putting your feet up: it's important to take a step back at this stage and remember that your most important job right now is "growing" your baby. 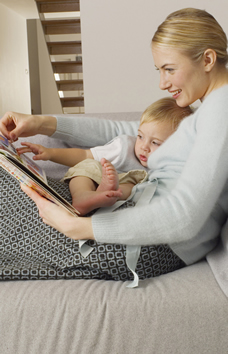 Keeping your pregnancy quiet in these early weeks is difficult. Whether you want to tell people you're expecting is a matter of personal choice, but there's a good reason to keep it quiet for the time being (see Keeping quiet).

You may, however, need to talk to someone (other than your partner), so confide in a friend. Choose someone who will indulge your need to discuss everything-from pregnancy symptoms to birth fears and baby names. The ideal candidate will find your food cravings and 4 am trips to the bathroom riveting... and provide bowls of ice cream and pickles, and advice around the clock.