You are 4 Weeks and 2 Days Pregnant 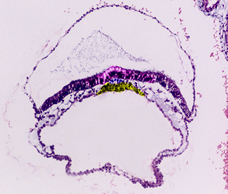 The embryo until this stage of development has consisted of two layers of cells. Now, a third layer starts to become visible as a "bulge" between the two-this bulge can be seen in the center of this image.
In this third week since conception, the cells that will become the embryo move to form the basis of the central nervous system.

While you're busy coming to terms with being pregnant, there are incredible changes taking place inside you. The group of cells, that will become your baby is currently shaped as a flat disk and undergoing significant development. A narrow groove begins to form down the middle of the cells. The leading edge of the groove is slightly wider forming a circular "node." The outer edges of the node and groove are slightly raised. The cells move from the rolled edges of these structures downward into the groove to lie between the original two layers of cells. This creates three layers of cells, those on each outer disk surface and those sandwiched between them. The node and groove do not extend along the entire length of the disk. 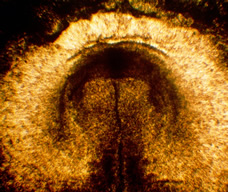 Shown here is the neural tube of an embryo in the early stages of pregnancy. The brain and spinal cord will develop from the neural tube. If the tube does not fully close, it can lead to birth defects, most commonly spina bifida.

I've been having difficulty getting pregnant and have now been diagnosed with polycystic ovary syndrome. What is this?

This condition causes the ovaries to be bigger than normal and they produce a large number of small follicles that never grow to full maturity. Therefore an egg is not released to be fertilized and periods are very irregular

The condition is a common cause of fertility problems and treatments are aimed at stimulating ovulation and also reducing some of the symptoms, such as increased body hair. Polycystic ovary syndrome appears to run in families.

It's the positive result you've been waiting for-hopefully!-but how do you share it with your partner? You could present him with an envelope containing your positive pregnancy test, or explain that you have a "special gift" for him but it won't be ready until about, oh, nine months. It shouldn't take him long to figure it out! Ideally, choose a time when you are both alone and feeling relaxed so that it can be a special moment. You may want to do another test with your partner just to make sure and also so that he feels involved.

Even if you're excited, and even if you can't get in touch with your partner for a day, don't be tempted to tell your mom and close friends first Your partner may be upset, understandably, if others know he's going to be a dad before he does.