You are 2 Weeks and 5 Days Pregnant 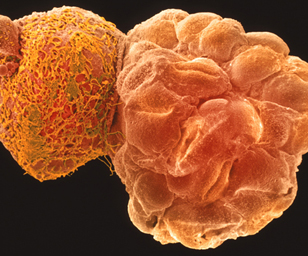 This is an embryo at the blastocyst stage, five days after fertilization. It is seen hatching from the shell that originally surrounded the unfertilized egg. At this stage, the blastocyst has moved into the uterus and is preparing to implant.

While playing the waiting game, you may want to consider how you'd feel if there are two fertilized embryos waiting to implant!

Have you conceived, and might it be twins? Twins can be nonidentical or identical and each type of twins is conceived differently.

Nonidentical (dizygotic) twins are the result of two separate eggs being fertilized by separate sperm. They may also occur as a result of IVF if two embryos are placed in the uterus.

Identical (monozygotic) twins occur when a single egg is fertilized by a single sperm and divides into two embryos. This split can occur at any stage up to nine days after fertilization and its timing is critical to the way the placenta(s) and amniotic sac(s) are formed. If the zygote (see You are 2 Weeks and 3 Days) splits within the first three days, two separate placentas and amniotic sacs develop. If the split occurs at blastocyst stage, four to nine days after fertilization, the fetuses will share a placenta but have separate sacs; when the split occurs after day nine, the fetuses will share a placenta and a sac.

Having nonidentical (fraternal) twins, which come from two separate fertilized eggs, depends a lot on family history. It's often said that twins skip a generation, which isn't quite true. In fact, your chances of having twins are simply higher if you have a close relative with twins, but twins never become inevitable, however many members of your family have them.

Family history is most relevant with nonidentical twins, and when the twins are on the mother's side. This makes sense because this kind of twin relies on a woman releasing two eggs in any one cycle, which may be hereditary. However, for reasons that aren't clear, a family history of twins on the father's side can be important too. It may be that the male of the species can carry a gene which makes his daughter release more than one egg at a time when she ovulates.

Twin conceptions may be more common than they appear. Without knowing it, some women miscarry one twin in early pregnancy. It is sometimes possible to have symptoms of a miscarriage, yet, confusingly, the pregnancy then appears to continue until term, culminating in the birth of a completely normal singleton baby.

Nobody is quite sure how often this happens, or why. While one in every 31 births in the US today is a twin birth, research using scans in very early pregnancy suggests that at conception the figure is much higher. Some experts believe that 15 percent of all births may start off as twins. Their loss could simply be nature's way of dealing with imperfections.

Some estimate that the chances of having twins after fertility-enhancing treatment is as high as 1 in 38.

The lining of the uterus, when fertilization occurs, becomes secretory to nourish an embryo. The lining prepares itself in the same way, no matter how many embryos implant.