You are 26 Weeks and 4 Days Pregnant 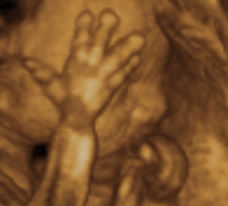 On this 3D image each finger is held outstretched in front of the face. Holding the fingers in this way for any length of time is tiring so most of the time the hands are held with the wrists slightly flexed and the fingers bent, ready to grasp any object that floats into reach.
Your baby's reproductive organs are now in place; a boy's testes have descended and a girl's ovaries have all their follicles.

If your baby is a boy, it's at about this time that the testes complete their descent into the scrotum. This is often associated with a small amount of fluid around each testis called a "hydrocele." This fluid will disappear naturally either before or after birth.

The cremaster muscle, part of the spermatic cord, is able to raise the testes back into the groin. This helps to regulate the temperature within the testes after birth, relaxing when cooling is needed. If your baby is slightly cool when examined, the cremaster muscle retracts the testes giving the impression of an undescended testis in your newborn baby.

Temperature control is not required in the uterus and the testes slowly move down into the scrotum. It is by no means unusual for one testis (or both) not to have descended at birth. Your doctor will check for this as part of the routine baby development checkup and confirm that both testes can be brought down into the scrotum.

Unlike the ovary, which already contains all of the egg-producing follicles that it will ever make, the testes do not start to make sperm until puberty.

Differences in the speed of growth and weight gain become more apparent now, and boys tend to be slightly heavier than girls at birth.

Weight gain in the third trimester

In your third trimester gaining weight steadily is important. If you were a healthy weight before your pregnancy, you should gain 3-5 pounds in the first trimester and 1-2 pounds a week the rest of your pregnancy, for a total of 25-37 lb. Keep in mind that the largest contributing factor to your overall weight gain will be your baby, followed by extra fat, which you will need to sustain your pregnancy and when breast-feeding. Your doctor will monitor your weight gain to ensure it's healthy.

Is it normal to argue all the time when we should be happily looking forward to our baby's arrival?

Expecting a baby puts pressure on even the strongest of relationships. Concerns about having a healthy baby and adjusting to parenthood were at the heart of most of our arguments. And when we started to talk about it, we found we had conflicting opinions about big child-rearing issues. I was sensitive, irritable, and moody, and often snapped when I didn't mean to.

We sat down and talked calmly and agreed not to "sweat the small stuff," avoiding areas of contention, and compromising when it didn't really matter. In the throes of a disagreement, I'd stop and think: I love this man, we're having a baby together, is this really important in the long run? We also made time to do positive things together that we had enjoyed before I was pregnant, and tried to find opportunities to laugh, to reduce stress, and to put things into perspective. By the time the baby arrived, we were both much more relaxed.