You are 20 Weeks and 2 Days Pregnant 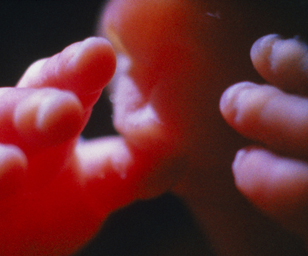 This close-up of the fingertips shows that the nail beds have formed and the nails are starting to grow. The nails have not yet hardened: this prevents your baby from scratching himself accidentally while he has no control over hand movements.

Twin babies have been sharing a home in the uterus for a while now, but how are they relating to each other?

At 21 weeks, a baby's eyes are still closed, but he'll still be aware of light and dark. Because of this, twins can probably make out their sibling changing position and they're increasingly becoming aware of each other. It's thought that because memory starts developing around now, twin babies may begin to bond at this stage.

As ultrasound scanning has proven, there's plenty of contact between twin babies in the uterus, especially as the amount of space decreases. They have been seen to touch often, kick, and try to grab. Each twin reacts to the other's movements.

They may not act in the same way, with one twin favoring different movements than the other one. For instance, one baby may prefer sucking his thumb, while the other likes clutching his cord. Nor do they necessarily have the same body clock, so they may be active at different times. This proves that, even in the uterus, twin babies are already individuals.

Can my baby feel anything when we have sex?

He may be aware of some movements when you have sex and of a change in your heart rate, but he won't be harmed by either. You may find that your baby responds to these sensations by moving a lot while you're having sex, or just afterward. Some women find this inhibiting, but remember that it doesn't mean the baby is uncomfortable and, of course, he doesn't understand what you're doing! If you have an orgasm, your uterus will feel tight and you may have Braxton-Hicks contractions but, again, this is not harmful to your baby.

Be reassured that your baby is well protected by the pool of amniotic fluid. Also, the cervix is closed by a plug of mucus during pregnancy so no semen can enter the uterus; this helps to guard against infection.

As the pregnancy progresses, contact between your twin babies will increase. Because you'll have more ultrasound scans in a twin pregnancy, you'll have plenty of opportunities to see them interacting with each other.