Day 9 of your Menstrual Cycle 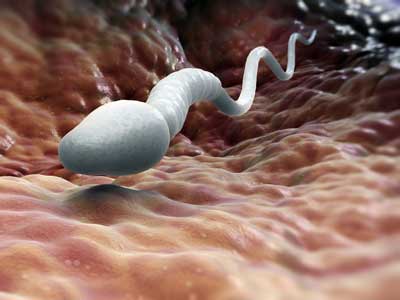 In your partner's body, sperm is constantly being produced. Here the sperm cells can be seen: they consist of a head, which contains the genetic material, and fertilizes the egg, and a tail, which propels the sperm along.

While you wait to ovulate, fascinating changes are occurring in your ovaries as your follicles mature to release an egg.

In the time leading up to ovulation, which will happen later this week, the most advanced follicle moves to the surface of the ovary, ready to release its precious cargo. While you were having your period, around 15-20 follicles were developing in your ovaries.

Both of your ovaries contribute to follicle growth, but usually only one ovary brings a follicle to ovulation. Which ovary it is seems to depend on chance since ovaries are not on a strict rotation. As the follicles grow, they enlarge greatly, filling with fluid secreted inside the follicle. Some women release more than one egg some months (see as a matter of fact) and if both are fertilized, it will mean nonidentical twins are conceived.

By the time of ovulation, the follicle will be about 1 in (2 cm) in diameter, while the egg is just about visible without a microscope.

To mature, follicles need FSH (follicle-stimulating hormone) produced by the brain's pituitary gland (see Changes during the menstrual cycle), but their early growth doesn't appear to rely on it. It may, however, depend on other hormones and chemicals.

If you have any ongoing medical problems, go to see your doctor before you start trying to conceive. Medical conditions such as diabetes, asthma, high blood pressure, heart trouble, a previous bout of deep vein thrombosis (DVT) (see ... Doctor), thyroid conditions, sickle-cell disease, and epilepsy can all impact a pregnancy.

The effect will depend on the individual condition and a specialist's advice and care will be needed. If you're in any doubt about how your own medical history may affect a pregnancy, check with your doctor before you start trying to conceive. 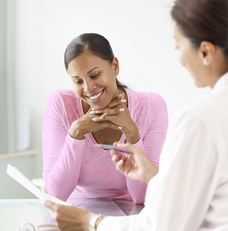 Dads: your diet counts too

It's never too late to start eating well if you want to become a dad. But because sperm take some weeks to mature, ideally start eating a healthy diet at least three months before conception. There are supplements, but most vitamins and minerals work better in the form of real food.