Day 8 of Your Menstrual Cycle 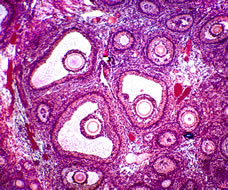 Here, three developing ovarian follicles can be seen in white. The inner circle of each is the egg. Of the follicles shown, it is likely that only one will fully mature at ovulation and release an egg.

By the end of this week you're likely to have ovulated. It's a good idea to know the signs that indicate you're at your most fertile.

This is week two of your cycle. You will probably ovulate by the end of this week and will therefore be fertile. However, the fertile window can be from 5 days before ovulation to 12-24 hours after as sperm can survive for 5 days inside you. If your periods are regular, ovulation can be easier to track, but you may want to use other methods, such as looking out for natural signs or using an ovulation kit. Remember, however, the best way to conceive is to have sex regularly.

While they are useful, testing kits are expensive and can be counterproductive because they make sex more clinical and less enjoyable. They work by testing the urine to detect a surge in LH, the hormone that triggers egg release.

Always follow the instructions given. Testing between 10 am and 8 pm should be fine, but try to aim for roughly the same time every day. After a positive test, you should ovulate 12-36 hours later. Results are about 99 percent accurate but occasionally the result is a false positive. Results can occasionally give a false negative, especially if you've drunk a lot of water. If your test was negative, do another one the next day. Once you have a positive result, you can stop testing for that month.

Changes during the menstrual cycle

Body temperature can be seen at the top of the chart, rising sharply right after ovulation. The bottom section shows cervical secretions. These begin in the days leading up to ovulation, starting off moist and sticky, then becoming wetter and stretchy at your most fertile time.

This week, look out for: