You are 9 Weeks and 6 Days Pregnant 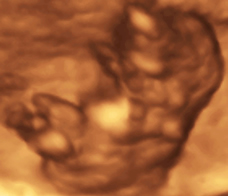 The umbilical cord widens where it enters the baby's abdomen. This bulge is necessary to accommodate the bowel that is forming underneath at this stage of development. The bones of the head are not yet fully formed.

Your baby's organ systems are now present, in a basic form, so at this point she changes from being an embryo to a fetus.

The early embryonic period is complete at the end of this week, and it is the start of the fetal period. The development of the embryo was characterized by the three cell lines each developing into their own types of tissues and organs, as it grew from a flat disk of cells into a human shape. Many of the changes took place concurrently, but it was the heart, circulation, and nervous systems that developed initially with the gut, limbs, and face development following.

During next week (your 11th week), your baby's kidneys and genital system will undergo their most rapid development. All your baby's organs need to mature fully, and many of them, such as the brain, lungs, and kidneys, will continue to mature throughout pregnancy and after birth.

During this ninth week, your baby's facial features are becoming more recognizable. The ears will take on their final shape, although they are still positioned low. 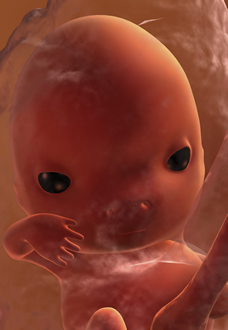 The eyes, which started on the side of the face start to move more centrally, the nose is visible, and the head achieves a more rounded contour.

A vegetarian diet can be safe and healthy in pregnancy. Lacto-ovo vegetarians, those who consume dairy products, usually have no trouble getting enough nutrients, though they should be careful to eat a varied diet rich in whole grains, beans, legumes, fruit, and vegetables, in order to obtain the proper mix of amino acids, vitamins, and minerals.

Vegetarians also need to obtain enough, as well as complete, protein since vegetarian sources tend to be lower than animal proteins. An intake of 2 oz (60 g) of protein is needed daily in pregnancy, which for vegetarians usually means that a protein source be included in all three meals, as well as a protein-containing snack.

A new noninvasive test to detect chromosomal disorders could soon be available.

This could require simply a sample of blood from the pregnant woman, unlike current tests that require a needle to be inserted into the uterus.