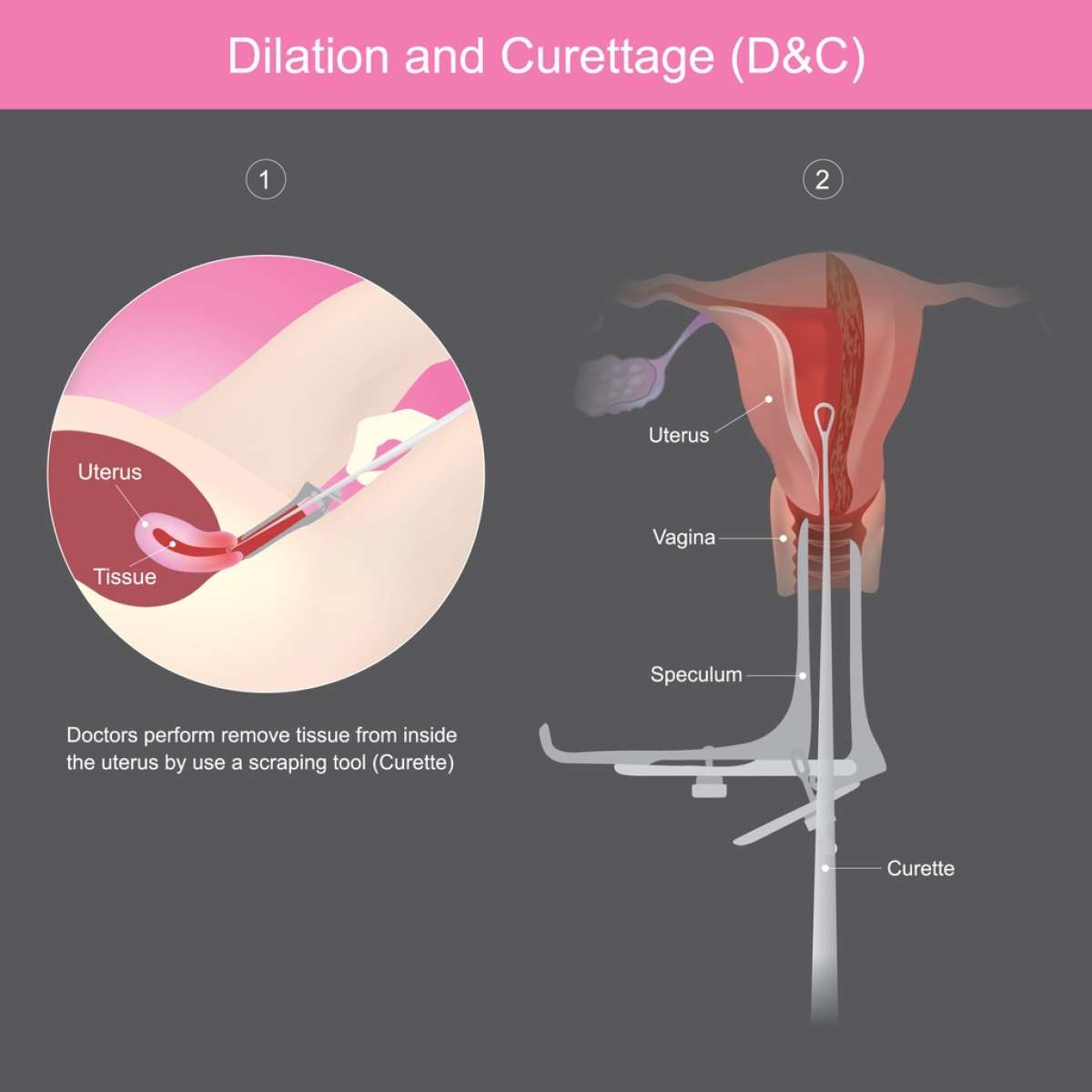 Is Dilation and Curettage (D&C) After Miscarriage the Same as Abortion?

We detail the differences between an abortion, and a dilation and a curettage after a miscarriage.
Heidi Butler
Table of contents

With the overturning of Roe v. Wade, many women now fear the possibility of prosecution for unintentional pregnancy loss. This situation is hard enough to bear without the worry of having to deal with the legal ramifications of something that cannot be controlled.

However, the bigger concern should be whether or not those impacted by miscarriage will be able to get the proper obstetric care they need following a spontaneous abortion. Below, we detail the differences between an abortion, and a dilation and a cutterage after a miscarriage as well as why this procedure may be harder to access in some regions.

What is Dilation and Curettage?

Dilation and Curettage (D&C) is an outpatient surgical procedure that is conducted when a woman is experiencing irregular heavy bleeding or when excess tissue needs to be removed from the uterus. Doctors commonly use this technique to remove uterine fibroids, cancerous tissue, polyps, and even small pieces of the placenta that can remain in the uterus following childbirth. However, it is also the procedure used to remove pregnancy tissue following a first trimester miscarriage and it is a common method of early abortion.

According to the American Pregnancy Association, ”a D&C may be recommended for women who miscarry later than 10-12 weeks, have had any complications, or have medical conditions in which emergency care could be needed.” In contrast, those who miscarry prior to this time frame can normally pass the tissue naturally with few to no issues.

Just like during a regular pelvic exam, the D&C miscarriage procedure involves you laying on an exam table with your feet in the stirrups. The doctor will then use a speculum to insert a series of rods to help slowly dilate your cervix. Finally, they will use either a suction device or a curette, a small scoop or spoon shaped surgical instrument, to remove the tissue.

The entire procedure normally only takes 10 to 15 minutes, but you may have to stay put for a few hours for recovery. This will depend on the reason for your D&C and the level of sedation that you choose to receive. Some women decide to be placed under general anesthesia for the procedure while others opt to just have local anesthesia to numb the area. This decision will also determine if the D&C occurs at a doctor’s office or at the hospital.

Side Effects to Expect

Following your D&C, light bleeding and mild cramping should be expected. Over-the-counter pain medications are normally prescribed for any discomfort. Recovery takes a few days, but spotting can last up to a few weeks. Your doctor will also likely instruct you to abstain from sexual intercourse and douching and to not use tampons for the days and or weeks following the procedure to avoid infection.

Moreover, because the endometrium (the lining of the uterus) is removed with this procedure, you should expect your menstrual cycle and ovulation windows to change. This can increase the risk of pregnancy. Thus, when you are allowed to resume sexual activity, make sure to use more than one form of birth control during this time frame.

If you notice the development of any worrisome symptoms like abnormal bleeding, fever, or severe pain, contact your healthcare provider about a follow-up appointment.

Potential Risks of a D&C

While this is a common procedure, it does carry some risks. These include damage to the cervix, perforation of the uterine wall, and infection. Additionally, while rare, some women can develop a condition called Asherman syndrome. This is caused by the formation of scar tissue or adhesions inside of the uterus. It can lead to infertility, which will require further surgery to fix.

It is important to note that uterine perforations are a more common occurrence in women who are undergoing the procedure for a miscarriage or an abortion as well as for women who have gone through menopause. Thankfully, this injury usually heals on its own.

There are three main types of miscarriages — complete, incomplete, and missed. The first is the most common. It is the spontaneous loss of a pregnancy that is followed by uterine bleeding, cramping, and the passage of the pregnancy tissue.

The second is an incomplete miscarriage, which involves some bleeding and cramping, but a portion of the fetal and placental tissue remains in the uterus. Finally, a missed miscarriage is where the fetus dies in the womb, but the woman has no symptoms and is therefore unaware of the loss until a checkup with her OBGYN.

A complete miscarriage is a condition that resolves on its own over a period of two weeks. However, in the case of both incomplete and missed miscarriages, if left untreated, the mother can experience prolonged excessive bleeding and severe infection, which can become life threatening in some cases. Thus, if the woman’s body does not expel the embryonic tissue and placenta on its own, medical or surgical interventions will be necessary.

If done with medication, your healthcare professional will prescribe misoprostol to help your uterus contract and to empty its remaining contents. Conversely, if the doctor determines that your diagnosis is more severe, they will likely forego using medication and recommend a D&C. This procedure is used in approximately half of all miscarriages.

The Difference— Miscarriage Vs Abortion

The Mayo Clinic defines a miscarriage as “the spontaneous loss of a pregnancy before the 20th week.” The organization goes on to note that “the term ‘miscarriage’ might suggest that something went wrong in the carrying of the pregnancy. But this is rarely true. Most miscarriages occur because the fetus isn't developing as expected.”

Conversely, an abortion is the deliberate termination of a pregnancy. What this means is that unlike a medical or surgical abortion, when a mother suffers a miscarriage she did not make a conscious decision to end the pregnancy. Therefore, the main distinction lies in whether or not there was a choice.

However, in some medical circles, these terms are often used interchangeably, with a miscarriage being termed a ‘spontaneous abortion‘. This verbiage is used because both instances result in the loss of a pregnancy. Additionally, the treatment for an abortion and both incomplete and missed miscarriages is virtually identical. This can lead to instances of misinterpretation for why procedures like D&Cs are used.

The Impact of Roe V. Wade on D&C Procedures

With the Supreme Court’s overturning of this historic court case, many states have outlawed abortion, with the exception of when the mother’s life is at risk and when the pregnancy could cause a severe impairment of major bodily function.

Nonetheless, due to the fact that the treatment for an abortion and a miscarriage are essentially the same, many doctors may now hesitate to complete a D&C or to provide the required medication when an incomplete or missed miscarriage occurs. This is purely out of fear that they will be accused for covering up an abortion procedure in a region where it is now illegal.

In a report put out by National Public Radio (NPR) in May of 2022, John Seago, the legislative director for Texas Right to Life, stated that the “existing Texas law stated that the act is not an abortion if it involves the treatment of an ectopic pregnancy — which most commonly occurs when the pregnancy grows in the fallopian tube — or to ’remove a dead, unborn child whose death was caused by spontaneous abortion’.”

This should mean that the care of the mother would take precedent. However, while D&Cs for miscarriages are still legal, this treatment could lead to legal ramifications for doctors in states like Texas that have put stringent bans on abortion. This means that women who experience an incomplete or missed miscarriage may have to travel in order to find someone willing to provide this type of treatment.

While President Biden has made it clear that protections will be in place to ensure that women can do this, this scenario is a huge concern for women’s health and the well-being of those who experience this type of devastating loss. Thus, it is more important than ever for women to pay attention to their symptoms and to talk to their OBGYN about their concerns and the services that are available to them, prior to a problem arising.

The American College of Obstetricians and Gynecologists (ACOG) states that the “Spontaneous and Induced Abortion Resource Center can answer many specific questions about abortion and miscarriage management.“ It is likely that policies and laws will change regularly with this developing issue so staying informed is imperative for newly pregnant women and those wanting to start or expand their families.