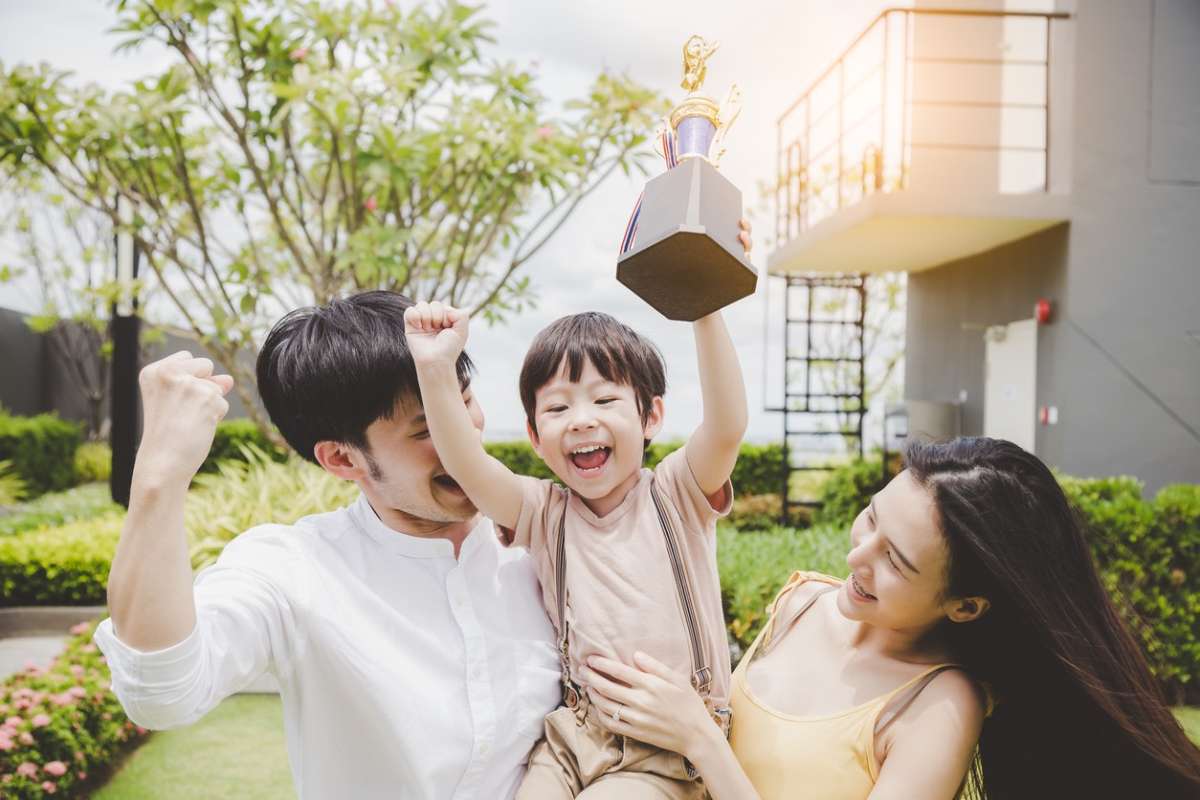 How I Praise My Child’s Achievements Without Bragging

Parents praising kids can be difficult. You want to give positive praise that doesn't make kids crave validation or compete with each other.
Katharine Chan, MSc, BSc, PMP

“Oh, my daughter is in the gifted program at school and she’s doing advanced math.”

I respond, “Wow, good for her” as I shudder in discomfort.

In Asian culture, success brings honor and failure brings shame to a family. From straight-As to winning piano competitions, I was an overachiever as a child.

My dad would often show off my achievements to other parents and praise me for my successful outcomes.

But it didn’t make me feel like he was proud of who I was as an individual, rather he was merely proud of what I had done for the family.

Now as a mom, here’s how I praise my kids, recognize their efforts, and build my children’s self-esteem without bragging.

Related: What Kind of Praise Works Best for Kids?

Let Your Kids Be Proud of Themselves

When my kids were tiny babies, I loved talking about them to other people in front of them all the time. They couldn’t really speak to me or really understand what I was saying so I kind of treated them like cute little blobs of flesh.

As long as I used a gentle tone and a warm facial expression, everything seemed like roses and sunshine to them.

I would talk incessantly to my coworkers about how adorable their little hands and feet were. I would brag to my friends about the smell of their heads being the best scent in the world, better than freshly baked chocolate chip cookies.

But then they grew and learned to speak and of course, developed much better listening and comprehension skills. And eventually, they knew exactly what I was saying about them.

Once they’re out of the baby stage, kids can express themselves thoroughly, I want them to speak their minds freely, and talk about what’s going on in their lives.

Now when someone asks me about how my kids did in some competition or at school, I redirect the conversation to them.

“How about you ask them yourself?”

I let my kids shine, giving them ownership of their efforts and empowering them to share their stories. It provides an opportunity for them to practice talking about their achievements which can be an incredibly useful skill for landing jobs and acing interviews in the future.

Ultimately, it’s not an accomplishment for me to share because it wasn’t me who accomplished it in the first place. And if they decide to give me credit for supporting them along the way, that’s just icing on the cake.

A 2018 research study looked at how different types of praise affected a group of fifth graders. The three techniques were: praising abilities, praising efforts, and no praise at all.

Results showed that children who were praised for ability had a significantly lower performance than those who received praise for effort and those who didn’t receive praise at all.

For instance, calling a child smart doesn’t help them in the long run because it conditions them to believe their achievements are due to genetic factors or natural talent.

However, recognizing a child’s efforts gives them a sense of control and helps build their resilience to keep trying and get better.

Instead of just talking about the outcome, I focus on the process of how they got there and the effort they’re putting toward a goal.

“You should be proud of yourself for working so hard. It wasn’t an easy feat.”

“It’s amazing you kept trying even when you wanted to give up.”

“I admire your determination and how focused you were during your practices.”

Emphasize that success doesn’t happen overnight. It’s about appreciating the process and giving them encouragement along the way that paves the way to success.

Don't Compare Kids to Others

It can be difficult to refrain from comparing kids, especially when they’re around the same age or if they’re siblings.

“You are doing so much better than when your sister was your age.”

“Aren’t you glad you’re not like that other kid in your swimming class? He can’t even kick properly.”

“You’re outperforming everyone in your class.”

However, I try to focus on my child’s individual strengths and avoid comparing them to how their peers are doing.

Bringing other kids into my praise causes my children to believe their self-worth is based on how they measure against others since my validation is conditional on where they stand. Their motivation to pursue goals becomes externally based.

In addition, it makes it seem like I’m only talking positively about them because I want to show off to others, boasting that I’m a better parent due to their success.

Being specific and targeting my child’s individual strengths and positive attributes and avoiding comparisons make my praise seem genuine and credible.