The Game of Chess

Learn to play Chess as a family.

Set up and chess pieces

The Game of Chess

The game of Chess today is played by two people and is renowned the world over for complicated maneuvering and strategic planning. You can learn the basics of Chess and have a good time playing it, or you can learn Chess notation and find out how the great players of the world think.

The goal of Chess is to maneuver your pieces in an effort to remove your opponent's pieces and ultimately capture his or her King. That might sound easy enough, but don't forget your opponent has the same goal in mind, so while you're strategizing your win, you also have to strategize your defense. There are some hard and fast rules in Chess, but there is also an art to achieving the ultimate goal of “checkmate” (winning the game). The art is in the movement of your pieces and the way you strategize the win.

History of the Game

The history of Chess is a much-debated topic amongst historians, but the consensus is that it has its origins in Persia or India. The oldest ancestor of Chess is a 4,000-year-old game called Chaturanga—a game played with dice and playing pieces consisting of elephants, horses, chariots, and foot soldiers. The most recent ancestor of Chess, as we know it today, is a 2,000-year-old game called “Shatranj,” which was played by Persians and Arabs. The current game of Chess was designed by a champion player of his day (the 1840s) named Howard Staunton.

There are many arguments floating around today—with some very good evidence to back them up—that Chess did not originate in Persia or India, but rather in China. Still other researchers claim that Chess was invented by women of ancient times and that the game is actually one of fertility and procreation rather than battle and war.

We Are the Champions

It's in the Cards

A Grandmaster is an expert player who has consistently scored high in international competition.

The most famous living Chess player today is Garry Kasparov. He is currently the highest-rated Chess player in the world—otherwise known as the Grandmaster. Kasparov continues to play Chess with one of his latest opponents—the IBM computer chip known as “Deep Blue,” reportedly the fastest microcomputer chip in the world to date. Kasparov also spends his time educating people about the game. In addition to starting a Web site dedicated to Chess education, he opened a Chess academy in Israel in 1997—a nonprofit association dedicated to worldwide Chess education.

The hope of Garry Kasparov and many Chess education proponents is to integrate Chess as a regular subject in schools. Many schools that teach Chess use Kasparov's techniques, and his Web site and electronic game development have proven to be great assets to the teaching curricula. The theory behind Chess education is that it stimulates the growth of concentration, multidimensional thinking, discipline, focus, and responsibility.

American-born Bobby Fischer is another world-famous Chess champion. He became Grandmaster in 1972—the first American ever to win the world championship. He is considered by many to be the greatest Chess player of all time due to his astronomical IQ. Fischer became a recluse for 20 years because the International Chess Federation for championship competition did not accept his desire to change the way Chess was played. He reappeared to play a match against previous rival Boris Spassky in 1992. He won 10 games to Spassky's five.

In a standard Chess set, you usually have white and black playing pieces. Some fancier sets have dark and light colored pieces in all different shapes and sizes, but it's usually easy enough to identify who is who and which side is “black” or “white.”

In the royal courts of Europe, human chessboards were not uncommon. The pieces were human beings dressed in costume to represent various Chess pieces. The game was played on a huge chessboard in a courtyard or lawn. The human pieces took their places on the board. Monarchs and courtiers called the moves and the “pieces” moved where they were told to go.

Here is a list of the different pieces and the moves they can make on the board:

The King: This piece is the most important piece and, ironically, one of the least powerful. The King can only move one square in any direction and usually doesn't journey too far into the board as a means of self-protection. But don't be fooled! The King is the key player in the game because when the King is captured, the game is over. The primary objective of Chess is to capture your opponent's King while keeping your own well-guarded.

The Queen: Ah … the Queen, your most valuable player. She is the most powerful piece on the board with her ability to move forward, backward, and diagonally for as many squares as you want her to go—as long as her path is not blocked. Watch out though … if you lose this piece to your opponent, your offense and defense will be severely hindered.

The Rook: This is another very powerful piece due to its range of mobility. The Rook, often shaped like a castle, can move forward and backward along any row as long as no other piece is blocking its path. The Rook cannot, however, move diagonally.

The Bishop: This piece, like the Rook, is very powerful due to its range of motion. Unlike the Rook, the Bishop can move on a diagonal and can move as many spaces as needed, provided there is no other piece in its path.

The Knight: The value of the Knight usually applies to the early stages of the game. It is a powerful piece that moves in an L-shape on the board. The reason it is so powerful in the beginning of the game is because it can jump other pieces on a crowded board.

Pawns: These are the least powerful pieces due to their lack of mobility on the board. A Pawn can only move one square at a time (if its path is not blocked), except on the first play when it can move two squares forward. Pawns can only capture opposing pieces when moving on a diagonal, and even then this piece can only move one square at a time. If the Pawn manages to survive its way to the eighth row (because these pieces don't last on the board very long), it can promote itself to any other piece except the King. When a Pawn is promoted, it is then replaced by that piece, so it is possible to have more than one Queen, two Bishops, two Knights, or two Rooks on the board at the same time.

The first thing you need to do to play Chess is set up the board—that's half the battle as each piece has a specific place on the board. Make sure that in placing the board, the white corner squares are in the lower right-hand corner on both your and your opponent's sides.

The pieces should be placed on the board in the following way: 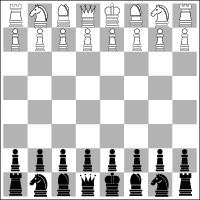 The starting positions on a chessboard.

From Antiques to Computer Games

Chess sets can be purchased at any retail toy and game store. They also come in travel sizes for long trips, and there are countless computerized versions on the market today. Some of the computer games are extremely challenging and fun. Even today's Grandmaster, Garry Kasparov, has his name on one of the computerized versions of the game. You can also play interactive Chess matches with anonymous opponents on the Internet or watch matches between other online players. It's a hugely popular game—and its popularity seems to grow on a daily basis.

The price of Chess sets vary from as little as fifty cents for miniature plastic sets to priceless sets found only in museums. There are sets made of precious stones played by kings and queens, and then there are the hokey sets that depict cartoon characters like the Simpsons.

Next: Basic moves and rules