Calculate the estimated age of your ancestor during the Revolutionary War. Don't consider 16 and 17 too young, especially when they misrepresented their age. Promises by the government to give land (in addition to pay) induced even older men to try to enlist.

Fires destroyed most of the records of the American Army and Navy in the custody of the War Department in 1800 and 1814. In a project begun in 1894, abstracts were made from documents purchased by the War Department from a variety of sources. Individual packets were created for each soldier, and the abstracted records inserted. Muster rolls, pay rolls, rank rolls, returns, hospital records, prison records, and others were examined. Information was extracted to bring together all the records relating to an individual soldier.

Indexes to Compiled Military Service Records are available not only for the Revolutionary War, but also for the War of 1812, various Indian wars and disturbances, the Mexican War, the Civil War, up through the Spanish-American War, the Philippine Insurrection, and the Boxer Rebellion. Though the indexes have been microfilmed, most of the actual files have not and are only available for in-person viewing at the National Archives or by ordering photocopies.

A typical Compiled Military Service Record, as it is known, gives the rank, military unit, date of entry into service, and whether discharged or separated by desertion, death, or other reasons. It may show age, place of birth, and residence at the time of enlistment. There is no guarantee that all of this information will be in an individual's packet, but normally they contain at least some of these bits. These compiled records are arranged by the war or the period of service, and thereunder by state (or some other designation), then by military unit, and last, alphabetically by the name of the soldier. Those for the Revolutionary War not only have a microfilmed index, but the complete original files also have been microfilmed. Using them requires only that you find a repository with both sets of microfilm or borrow the films.

Go to a National Archives branch or to a library that has the National Archives microfilm. Look in the Catalog previously mentioned for the listings of the “Compiled Military Service Records of the Revolutionary War.” The Catalog lists micropublication M860 with 58 rolls by number, and indicates the range of surnames on each roll. 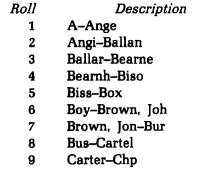 Example of roll listings on
micropublication M860 by surname.

As shown in the following figure, it is easy to ascertain which roll has the index for the surname you seek. Upon accessing the correct roll, find the soldier's name, and copy all the information shown for him. With that you will be able to find his file. Return again to the Catalog; it will point you to a second micropublication, M881, the Compiled Service Records of Soldiers Who Served in the American Army During the Revolutionary War. Your file is on one of the latter 1,096 rolls.

Roll listings of micropublication M881,
which contains the actual files.

Let's practice. Searching for John Carter, go to Roll 9 of M860, as seen in the above figure. Find his name in the index on that roll. Copy all the information: regiment, company, everything. Now return to the same microfilm Catalog; note that these records are available on M881, which contain the files. As seen in the following figure, the rolls in M881 are arranged by state, thereunder by regiment, and so on, and last by surname. Find the listed roll that matches the data shown by the index for the soldier. If John Carter served in Delaware in the 2nd Regiment of New Castle County, Militia (determined from the index), his record would be on Roll 380 of M881. Now you can find the Compiled Military Service Record file. It may consist of only one card or a number of cards.

A few of the rolls in micropublication M881 for the state of Delaware are shown here to illustrate how the rolls are listed. Match the information you found on your ancestor's indexed entry to determine the roll you need.