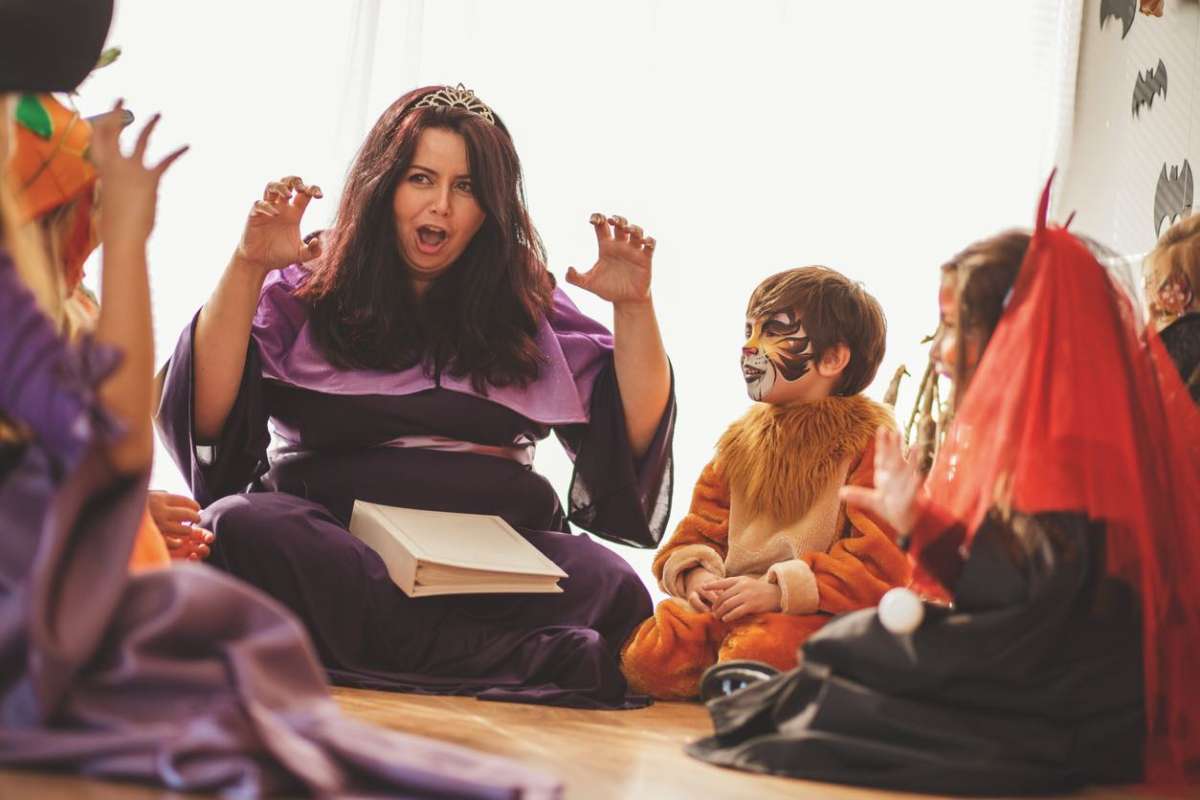 These classic scary stories for kids include ghost stories and urban legends that will get kids in the Halloween spirit!
Brittany McCabe

My husband, as the youngest of three, grew up being exposed to scary movies, books, and stories at a much younger age than me. My mom was far more conservative and sheltering, so when it comes to scary stories for kids, my husband and I have completely different comfort levels.

I still remember the day I learned about the urban legend of Bloody Mary. It was second grade, and I was in the bathroom during recess. One of the kids came in, flickering the lights on and off.

If you are wondering what are the best scary Halloween stories for kids, this is a list of spooky tales that kids of all ages will love. If the scary story scale ranges from Sesame Street to Nightmare on Elm Street, we’d say these range somewhere in the middle.

Related: 28 Scary Movies for Tweens and Teens This Halloween!

They won’t keep your little ones up all night with nightmares, but they may have them peeking under the bed just in case something’s lurking…

13 of the best scary stories for kids:

Summary of the Bloody Mary myth:

The rest is where the story differs a bit, some believe she will scratch the summoner, kill the summoner, or drag the summoner into the mirror with her. The spookiest part of this urban legend is some people think this is based on the story of Mary Worth.

Mary was believed to be a witch because she lived alone in the woods. Little girls in the village soon went missing and people were suspicious of Mary Worth and her involvement.

Link to the Full Story.

Summary of the Vanishing Hitchhiker:

Two young boys were driving down a desolate country road and they saw a young girl with her thumb out. They pulled over, asking if she would like a ride, and she got into the back seat of their car.

She asked the boys if they wouldn't mind taking her home, but they explained they were on their way to a dance and ask if she wanted to join them. She danced the night away with them and they dropped her off at home.

One of the boys forgot to get the jacket he lent to her during the cold evening and returned to her house the next day to ask for it. When they knocked on the door, her mother answered and told the boys they must be mistaken because her daughter died 12 years ago.

Summary of Under the Bed:

A family checked into a hotel while on vacation one day. When they settled into their room, they noticed there was a horrible smell, and they asked the manager to give them a new room. The manager said they were all booked for the night, but he would send in a housekeeper.

The family left for the evening and when they returned, they noticed the smell was still there. With no other rooms available, they began to search for the culprit of the smell. They discovered the odor was coming from their bed, when they took the bed apart, they discovered a dead woman.

This is a Japanese urban legend is about a young girl who falls on the railroad tracks in a busy train station and gets cut in half. She is a vengeful spirit and haunts the train station and nearby neighborhoods at night.

The girl gets her name from making a "teke teke" sound while crawling on her elbows and dragging her torso around. If she captures you, she will cut your body in half, mimicking her death.

Summary of The Babysitter story:

A teenager was babysitting two children one evening. Once she put the kids to bed, she plopped on the couch to watch some TV when the phone rang.

When the phone rang for the third time and the voice demanded she should check on the children for their safety, she quickly hung up and called the police. The police called her back telling her to get out of the house as fast as she could because the calls were coming from upstairs.

When the police arrive, the children were found hiding scared and screaming in the closet.

Summary of The Yellow Ribbon story:

Jane and Johnny were neighbors, they met when she was three years old. Every day Jane wore a yellow ribbon tied around her neck and never removed it. Johnny and Jane were friends and asked her from time to time why she always wore that yellow ribbon, but she never told him.

After a few years, the kids grew into teenagers and then adults. They began to date and fall in love. Eventually, they got married and had a family. Johnny continued to ask about the ribbon, but she refused to tell him.

When they were very old and Jane was on her death bed, Johnny once again asked about the ribbon, knowing this will be his only time to find out. Jane finally agreed and said, "OK, Johnny, go ahead and remove the yellow ribbon." Johnny nervously removed the ribbon and Jane's head fell off.

Summary of the Keyhole ghost story for kids:

A man checked into a hotel and the woman at the counter gave him his room key and walked him to his room. On their way, she pointed out a door with no room number that was locked, she advised him to not go into that room under any circumstances.

He agreed and went to sleep. The next day his curiosity got the best of him and walked over to the door trying to open it, but it was locked. He peeked through the keyhole and saw a completely white room with a lady leaning her head against the wall.

He felt a gust of cold air on his eye, and he decided to walk away. He came back to the door the next day and looked through the keyhole. This time he could not see anything but red.

He decided to ask the woman in the front about the room and she confessed that a while back a woman was killed in that room by her husband. They were a strange couple that had pale white skin and red eyes.

Summary of the Bubble Bath scary story for kids:

Jennifer was home alone and studying hard for a test when she received a text message from an unknown number that read, "Take a bubble bath and get to bed before your test tomorrow. Love, Mom." She realized her mom must have texted her from someone else's phone and she proceeded to head to the bathroom to take a bath.

She noticed the bath had already been filled for her. She climbed in to relax when after a few seconds, her skin began to burn. She screamed and jumped out of the bath clawing at her skin as it peeled off. There was a man who appeared behind her laughing and told her, "Next time you should bathe in water instead of acid."

Lenny loved Halloween and wanted to wear the scariest mask he could find to a Halloween party to surprise his friends. He gets ready and heads out the door. When he arrives at the party, he sees many people dressed up, but no one has on as scary of a mask as he does.

As he walks around, no one is commenting on his mask, which bums him out a bit, since he wanted to scare people. A girl comes up to him and asks, "What are you supposed to be?"

Lenny gets nervous and doesn't say anything. He decides to walk into the kitchen for some punch. He tries to take off his mask so he can drink, but the mask won't budge. He begins to panic a little bit, so he takes a knife and goes to the bathroom.

He begins cutting off pieces of the mask to remove it but it is stuck on and will not budge. He cuts more off and screams with every piece he removes. A line forms outside the door and the kids are pounding and yelling at him to get out.

They can hear Lenny yell, "THE MASK WON’T COME OFF!" But the kids are confused because Lenny wasn't wearing a mask.

Summary of “The Big Toe”:

A boy was digging in the garden and stumbled upon a big toe. He pulled with all his might and finally it popped off on his hand. He brought it home to show his mother and she decided to cook it for dinner that night.

That night at the dinner table, his mother, father, and himself split the toe to eat and then went to bed. The little boy was awoken to the sound of someone saying, "Who has my toe?"

He ignored it, but the sound got louder and louder and soon he could hear the back door open and footsteps into his house. The footsteps soon reached his bedroom and stopped by his bed and heard a voice say, "You have my toe!"

11. Scary Stories to Tell in the Dark: "The Scarecrow"

Summary of the Scarecrow scary story:

Three brothers lived on a farm and every Fall their father would put out the same scarecrow. After years, the scarecrow became ragged, so the brothers decided to make a new and scarier one.

After some time, one of the boys went outside to check on the scarecrow. Because it was dark and muddy, he fell, and when he looked up the scarecrow was looking down on him!

He ran inside. The next morning the scarecrow was gone and nowhere to be seen.

Summary of The Hook story:

A girl was getting ready to go on a date when she heard on the news there was a deranged serial killer on the loose who escaped from a nearby insane asylum. He has a hook on his right arm, and he is extremely dangerous.

The girl was preoccupied with getting ready for her date and they drove to a remote lover's lane. Once she was there, she became nervous about the news she heard earlier and demanded her boyfriend take her home.

Annoyed, he drove her home and didn't open her door. Once she exited the car, she began to scream, and her boyfriend jumped out. There on the passenger side handle hung a bloody hook.

13. Scary Stories to Tell in the Dark: "Clap Once for Yes"

Summary of Clap Once for Yes:

A man and woman went hiking in the mountains and soon realized they were lost, and the sun began to set. They hiked for a little while longer and luckily found an abandoned cabin nearby.

The couple walked in cautiously and knew there was no other option than to stay for the night. They huddled together on the floor and fell asleep, only to be woken up a few hours later by a strange noise.

The husband called out, "Who's there?" but no one answered. The woman said thought maybe the noise was made by someone who cannot speak, so the man called out again, "Is anyone there? Clap once for yes."

All of a sudden, they heard a loud clap!

For more ideas to help kids get in the Halloween spirit, check out our 10 Favorite Halloween Activities for Kids!

Thank you for your feedback.
About the author
Brittany McCabe